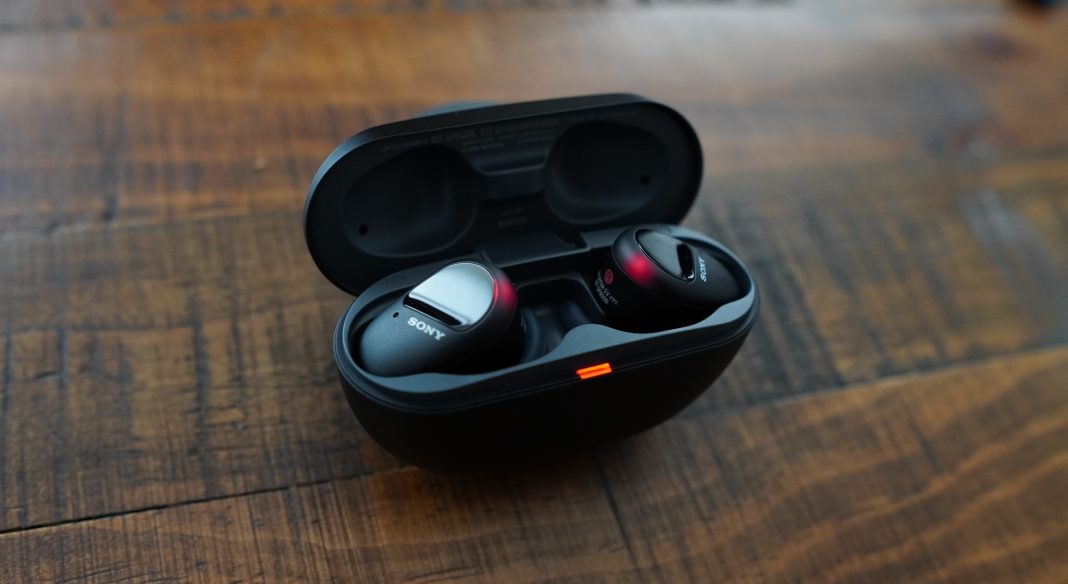 Sony has been churning out more true wireless earbuds lately and one to release this year is the successor to their WF-SP700N which is called the WF-SP800N. While I loved the 700s they were plagued with horrendous battery life and a somewhat flimsy case. When I heard they were revising the true wireless sports line, I had to get them plugged in my ears pronto. I have been using them the past couple of months and I will say off the bat, they have exceeded my expectations. Read on to see exactly why.

Sony’s WF-SP800N is a premium looking pair of earbuds. They feature a solid black colorway with transparent earbuds and arc supporters. There are 2 different size arcs and 4 different tips that should fit your liking. Once you get your perfect size just pop them in your ear and curve them to secure a fit. On each earbud is a darker panel which represents touch controls. Since the SP800N are for the sport they are utilizing IP55 to provide water and sweat resistance capabilities.

One of the big improvements over the SP700N is its case. It does not have a rotating lid and just an open/close lid like you normally see on these types of earbuds. It’s like the WF-1000XM3 case but thankfully not as big and wide. Unfortunately, I have grown accustomed to having NFC on Sony’s brand of headphones and none is included in these. It’s not a deal-breaker but always found it a breeze to use. There is Type-C charging via the case and will you a total of 18 hours of playtime. If you opt w/o ANC, you will get up to 26.  I don’t think I ever would though.

As mentioned earlier each earbud has touch control options. They are fully customizable to your liking. There is Playback, Ambient Sound, Volume Control, Google Assistant/Alexa or you can just disable them. I tend to frequently use the Playback option on the right side and the Ambient Sound on the left. Actions can be achieved by single taps, doubles, or sometimes holding the touch control area. I like that they are very responsive and don’t display lag communicating from the earbuds to the smartphone.

To make changes to your controls make sure you have the Sony Headphones Connect app downloaded to your smartphone. Besides changing controls, you can get updates, get battery statuses for your earbuds AND case, and even set up 360 Reality Audio.

In the audio category, these are utilizing 6mm drivers and a stable Bluetooth 5.0 connection. I can’t remember any time while using them primarily with my OnePlus 8 Pro that they disconnected or distorted in any way possible.

Sony has been touting their “EXTRA BASS” branding and I can see why. These earbuds hit you with vibrating thumps but not too much where it hides the crisp vocals being laid out. On the codec side, they are using SBC and AAC which are standard in most smartphones.

Watching movies or on apps such as YouTube gives no impressions of delay and words on-screen are par are totally in sync.

Due to the lockdowns of Covid-19 when I originally got these I wasn’t really traveling outside as much. But over the past month, I have ventured out and used these normally like I would use when I do earbud testing. The casual runs, public transportation on noisy trains but sadly no flying. Noise Cancelling on these are pretty darn good and seem to block out a hell amount of outside noise. Also, it helps that these have arc supporters, so they never really loosen or fall out of my ear. Its ambient sound is not as open as I like to be though.

Using these on the daily I see myself only having to charge these about once a week which puts it near its estimated battery life give or take.

These are also some of the best Sony headphones I used in a while for calls as the mics seem to pick up conversations pretty well. I tested them for hours on an iPhone 11 Pro and OnePlus 8 and the callers on the other end said they could hear me clearly.

These are worlds better than their SP7 predecessor by far. Better sound, better case, and most importantly better battery life. Touch Controls are super responsive and mic quality has improved. The only gripe I can really have with these is the exclusion of NFC but that is more of a thing I got used to having from Sony than it being a necessity. If you are interested in the WF-SP800N, they are going for $199.99 and besides being Black also comes in Blue.