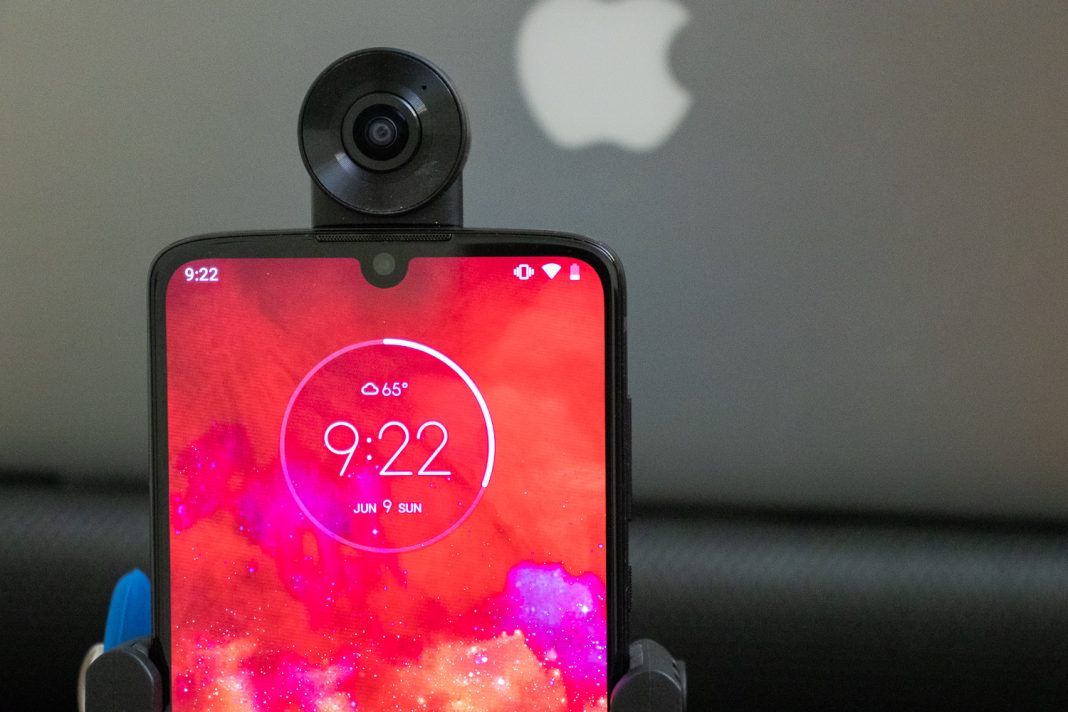 The current landscape for mobile phones seems to be one of extremes: You’re either paying close to, if not more than, $1,000 for a “flagship” phone or making serious compromises for an affordable option. With its fourth generation Z-series phone, Motorola is hoping to shake up the game with flagship-level features at half the price of its main competitors. Here’s an iPhone guy’s take on the all new Motorola Moto Z4.

Give the People What They Want

Once you remove brand affiliation/recognition and preferred operating system of choice, most consumers are looking to a handful of key factors when purchasing a new phone: camera/image quality, battery life, and how good the display is. The Motorola Moto Z4 offers this up in spades and throws in the modularity of its Moto Mods attachment system.

The display on the Moto Z4 is a bright, crisp Full HD+ capable display with an impressive 1,000,000:1 contrast ratio. In non-spec sheet speak, I found this screen easy on the eyes when using for extended periods of time – including watching Ramy on Hulu. Another benefit of the robust display was using it in conjunction with my actual camera – importing images for review and having a pocket display for reviewing was a great benefit. The 6.4-inch display is not the largest by far and in real-world use, a welcome change from the larger is better ethos. Sometimes you just want a phone that can discreetly fit in a pocket; screen size-wise, the Moto Z4 foots the bill (but not without a major caveat).

The next item that can make or break a purchasing decision is battery life. The Moto Z4 advertises an estimated 2-day battery life with “regular” use. As you’d expect, we pushed the Moto Z4’s battery in our week long test: shooting photos, 360-videos, lots of browsing, and of course lots of social media time. For our stress test, we binged a few hours of TV/movies and noted that after an 8-hour work day, there was still juice left in the tank to snap some pictures during happy hour. If you’re regular activities look far more reserved than this, we think it’s very likely that you could see something close to the promised 2-days.

What if you’re pushing the battery to its limits? Well if your concern is not having enough juice to get you through the day, the Moto Z4 includes a “TurboPower” charger that allows for quick charging on depleted devices. In our testing, we found that a 20-minute charge could net you at least 2-hours of battery life from a nearly depleted handset. Good to know when you’ve only got a few minutes to spare while in transit or trying to make a flight.

But What About the Camera?

Glad you asked. The Moto Z4 claims to have a 48-megapixel rear facing camera that produces hi-res 12-MP images (front-facing camera is billed as a 25-MP camera with 6.25-MP output); which is really a 12-megapixel camera that collects image data shifting pixels 4 times to capture 48-megapixels worth of data. If you’re familiar with Olympus’ implementation of High-Res Shot mode (or really any camera manufacturer in the last couple of years), the image sensor is shifted slightly to collect more image data and “stitched” in-camera to produce a higher resolution image.  At the Moto Z’s launch event, a rep confirmed that this was the basic idea behind the technology, though would not confirm if the sensor was physically moving or if it was software that did the heavy lifting.

Speaking of software enhancements, the current feature du jour on all mobile phones these days is some sort of implementation of night/low-light photography. The Moto Z4 is no exception and offers their own take on Night Shot with “Night Vision.” As with similar implementations of this feature, it requires some light and a very steady hand (depending on how little light is available). In our testing, Night Vision offers a significant bump up in image quality over phones without it (looking at you, my aging iPhone 7), but it’s not without its problems.

For starters, dynamic range is washed by the dramatic increase in brightness. By prioritizing exposure levels on the image’s histogram, details are lost and often times colors become a muddy mess. Sure, you’re able to “see” things that wouldn’t otherwise appear in a shot, but you will ultimately sacrifice quality the more you push it. It should be noted that this isn’t a problem specific to the Moto Z4’s use of the technology, but more of a problem created by the technology.

The Z4’s algorithmic definition of what should be lit (over-exposed) vs what shouldn’t, greatly depends on what you’re trying to shoot. Shooting the alley way behind my apartment building, the camera’s Night Vision was trying to bring out trees and fence (completely in the dark) but wasn’t “sure” of what to do with the foreground that had some light spillage from the windows nearby. The end result was a muddy, green-tinted image that reveals what you couldn’t see with your naked eye. While not the most aesthetically pleasing shot, it does show what can be possible.

My biggest beef with these night shot images is that they all require a tripod if you’re looking for great results. From $1000+ on down $300-$400 phones, any device that uses this type of low-light boosting camera performance suffers from shake if not mounted on a tripod. If you want to get decent shots of your favorite drink or food at a dimly lit restaurant, this will do the trick. Want great photos of your friends in the dark? Who does this? You’re a creep and should stop this immediately.

When the first Moto Z was introduced, Motorola promised that it would support the Moto Mod attachments for at minimum 2 iterations. The Moto Z4 is the fourth gen device that still supports the day-one Moto Mods. As far as Android devices go, I can’t think of a single handset that’s had this much support by any company.

While on the subject of support, the Moto Z4 has an optional 5G Moto Mod that will upgrade the existing Moto Z4 to be compatible with Verizon’s 5G network. Beats the hell out of having to buy a new phone. Our review unit was paired with Motorola’s 360 camera mod, capable of shooting 1080p, Full HD video. We’ve said it in the past: our day-to-day lives just aren’t that exciting where we’d get a lot of use from a 360-camera, but it’s nice to have.

Thoughts From the iPhone Guy

It’s a running gag within the G Style team that I’m the Apple faithful. For this review I completely ditched my iPhone and lived exclusively with Android 9 and the Motorola Moto Z4 as my phone. I’ve been using Android phones since the Note5 with regularity but never committed to using them exclusively since this test. The Moto Z4 is a marked improvement from my iPhone 7 Plus (as it should be considering it’s now nearly a 4-year-old phone) but ultimately both function as a device for getting access to Google’s suite of apps.

During my time with the Moto Z4 I found myself loving the display for its crisp colors, large (but not unwieldy) size. The camera is on par with far more expensive devices and to be honest, I’d rather keep the money in my pocket. Night Vision wasn’t as good as I would have liked but by no means is it a failure. In fact, if this feature is a must have when comparing device options, you should immediately short list the Moto Z4. The form factor is svelte and razor-thin without a mod, but adding a mod to the back adds a significant amount of bulk to the phone – this was the major caveat that I mentioned earlier in the article. The truth is that I’d often leave the mod at home because slim looking pockets mean more to me than having an add-on, I’d only use in the rarest of occasions.

All in all, the Moto Z4 is a capable Android phone that doesn’t get the kind of recognition that some of their more expensive competitors get. It offers most, if not all, of the features you’ve come to expect from a flagship phone with the added benefit of the Moto Mods system. The ability to expand storage via a Micro SD card is another plus – one that’s disappeared from most flagships these days, and the inclusion of a standard 3.5mm headphone jack is welcomed (so much for “courage”). All for $499 unlocked and including the 360-camera mod.