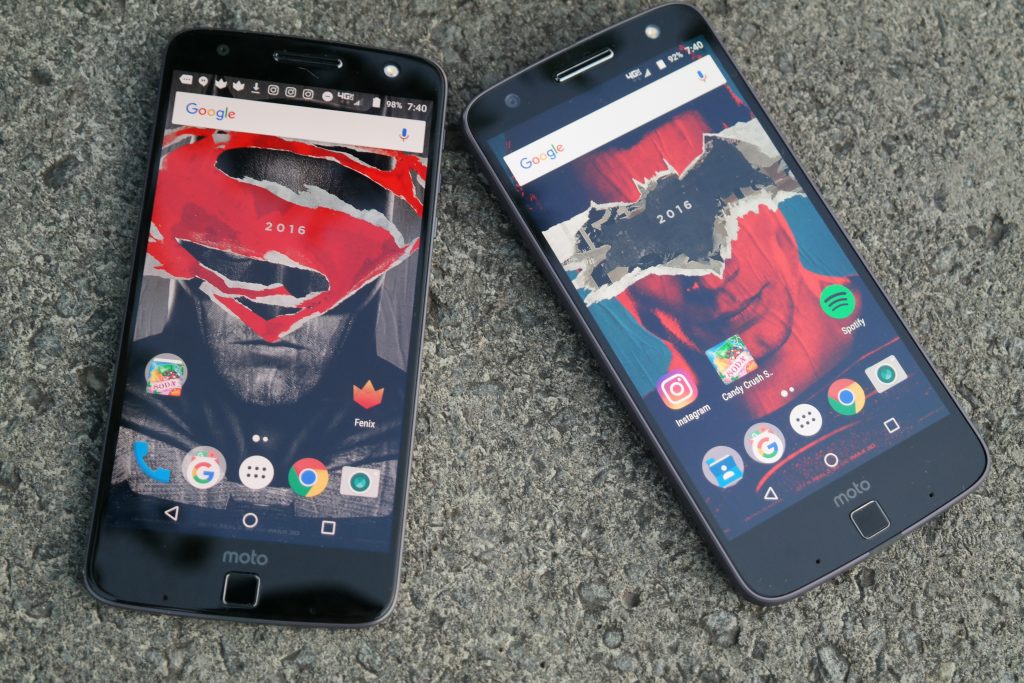 Seems like when Verizon and Motorola get together they release not one but two smartphones. Well that was the trend last year with the Droid Turbo 2 and Droid Maxx 2 last year and this year with the Moto Z & Moto Z Force devices. This year Motorola has decided to enter the modular or “mods” realm for smartphones and doing so in an interesting fashion. Google has been talking about it with their Project Ara and LG has kind of done it with the G5 with some gripes. How well do these “Moto Mods” actually work and how good are these “Z” phones from Motorola? I gave both phones a run for their money over the past month and have some likes and dislikes towards the newest phones that Moto built.

Of course since these are Motorola phones you can easily go to their Motomaker website and choose three different colorways of how you want the Moto Z(Force) to look. It not exactly custom friendly like the Moto X line has been but its understandable with the moto mods design present. Both are designed exactly the same with volume controls and power on the right. Top is for access to the microSD and simcard slot while the bottom is for the Type-C port. There is no headphone jack available and only way to connect headphones is via the included Type-C to 3.5mm adapter or go the route of bluetooth. This was one of the surprises with this phone and while it may not bother some I tend to miss the port. At times I have forgotten the adapter if using wired headphones and its that’s no good. Also while it does come with a Turbo charger the Type C cable isn’t detachable so you cant sync the device to your PC if you wanted to and have to rely on buying one or other options. 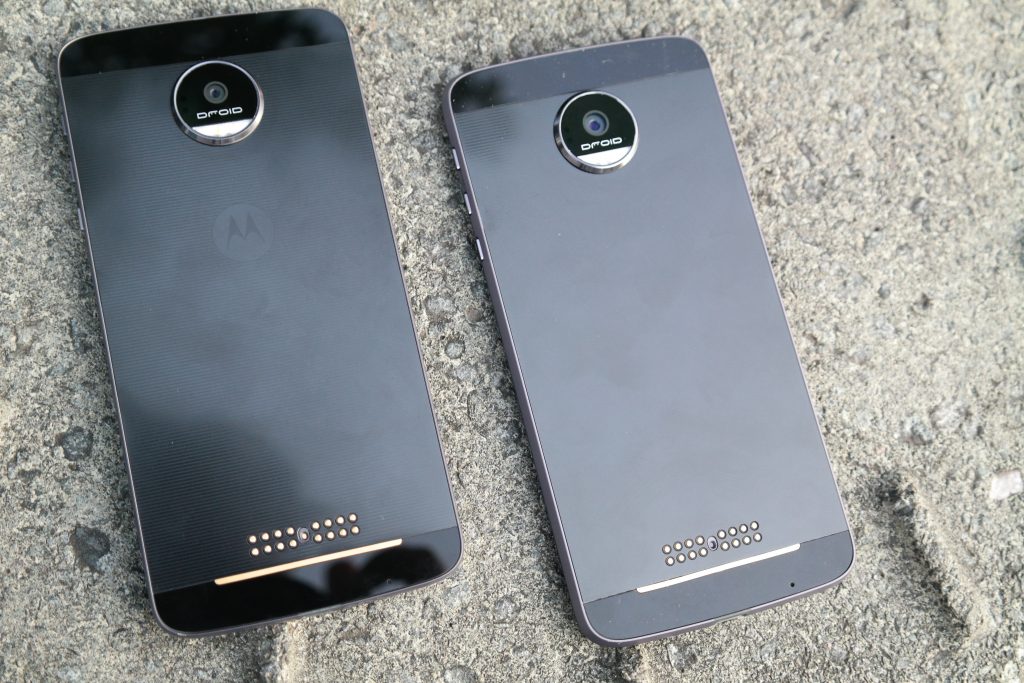 Build wise the Moto Z is pretty light and thin on par with the Galaxy S7 Edge coming under 5 oz. The Moto Z Force is a bit thicker and hovers around close to 6 oz. This reason being the extra attributes the Z Force has over the Z.

This is one area where the phones start to differentiate. While both displays are 5.5″ AMOLED 1440p QHD with 535ppi, the Moto Z uses Corning Gorilla Glass while the Z Force has Motorola’s ShatterShield screen that was on their last device the Droid Turbo 2. Both look good for viewing purposes such as videos, reading articles and are pretty bright even outside in broad daylight. Maybe it’s just me but I did find the Z Force more prone to scratches then the Z was. Good thing about the ShatterShield is that Motorola will replace it which is always a plus if it ever gets damaged. 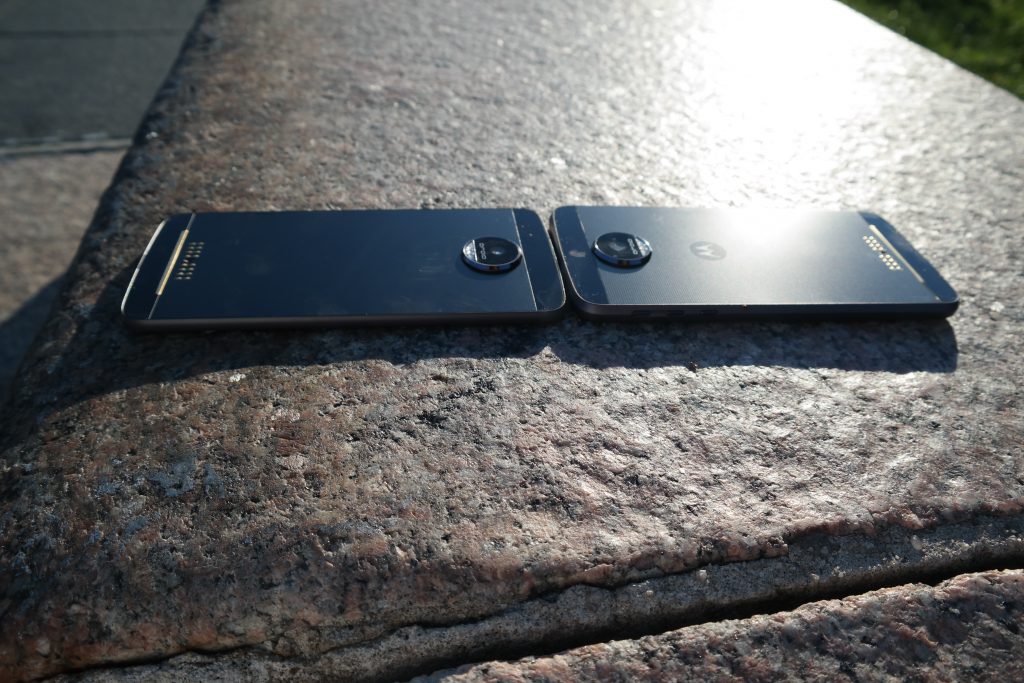 The Moto Z and Moto Z Force are pretty speedy thanks in part to the equipment they have lying underneath the hood. Each is using a Qualcomm Snapdragon 820 chip, Adreno 530 GPU, 4GB RAM, and start out at 32GB with a 64GB option also available. If you need more space you can pop in a microSD that supports up to 2GB of storage. Thanks to Motorola’s TurboCharge I have been able to bring these devices back from the brink of death pretty quick. They reserve their huge batteries when not in use which is always a thumbs up. The Moto Z does have a 2,600mAh battery while the Moto Z Force keeps more capacity at 3,500mAh. One strength in Motorola Droid smartphones has always been their battery life and they keep the show going with these two devices.

Motorola always keep their skins pretty close to Vanilla Android and these two are in that same vein with both running Android 6 aka Marshmallow. I imagine down the line they will be primed to get updates for Android’s next OS update Nougat at some point. Motorola’s other sweet and non intrusive features are still here such as Active Display & Moto Gestures. Waving up your hand over the devices will give you a quick glimpse thanks to its front sensors or a quick twist of the wrist will launch the camera. I did find the fingerprint sensor pretty responsive and was pretty instant when pressed. Getting used to doing other things with it takes time. Holding it down will turn off the screen as it’s not clickable. I wasn’t too big a fan of the onscreen buttons and would have preferred near the front sensors but that’s an old habit as well.

I think Motorola has finally got it in regards to their camera software or rather going in the right direction. They have made some adjustments where you can either just tap to shoot or at least tap to focus. Also there is a dial for exposure which is similar to the one found on the Galaxy S7 smartphones. Photos came out pretty accurate with colors and some were pretty clean. I did find trying to snap a moving shot or being in motion a bit harder to get crisp shots. Video recording was fine using the 4K option on both phones. The Moto Z has a 13MP lens while the Z Force has a 21MP lens. Shooting with both images did look pretty much similar with just the Z Force having the option of better zoom in on pix with its higher MP. Front camera wise they both are utilizing 5MP shooters. 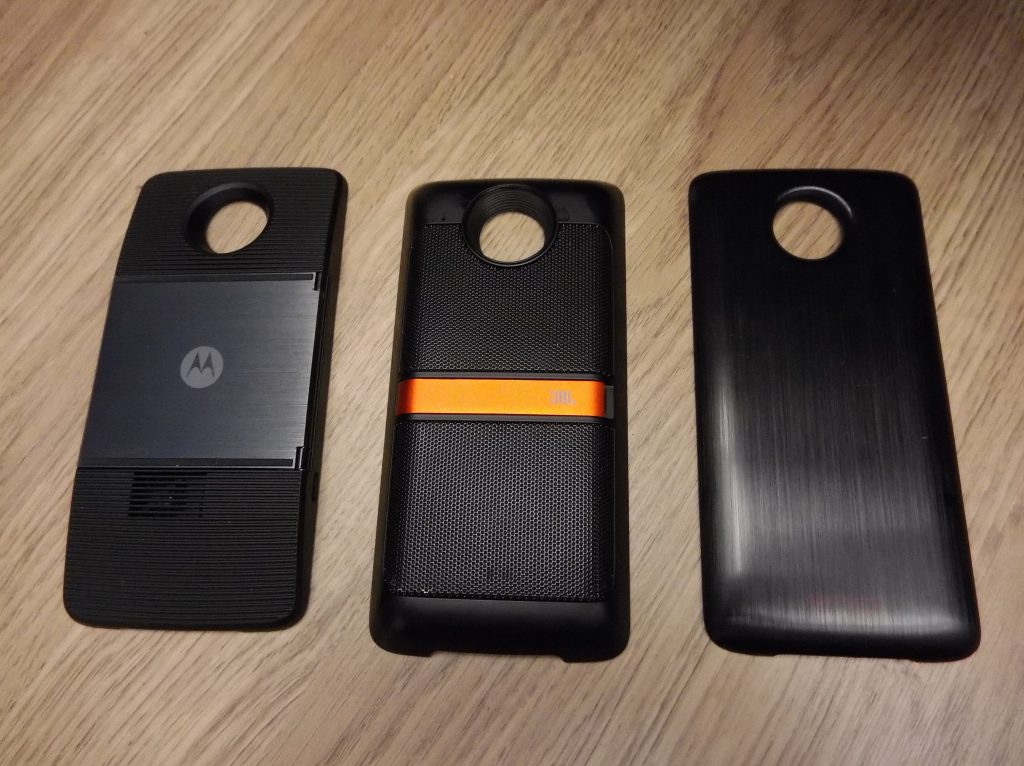 The main selling point of the Moto Z devices is of course their MotoMods. The “mod” part which is short for modular design. Both Moto Z devices are designed to easily swap or attach “mods” instantly and effortlessly. So far they have different mods ranging from battery packs to a JBL speaker and even a projector. They all work pretty good in conjunction with the devices and are relatively easy to remove and dont feel like they will come off. The most useful will be of course the battery pack while the most fun might actually be the projector. What’s good about the mods is they have indicators on the Moto devices to let you know how much power they have left. I think Moto Mods is an interesting feature but I wonder if it will be just for this iteration of devices or will we see it in future models down the line. I will have a whole separate article dedicated to Moto Mods coming up shortly.

So with this all said and done I like the new Moto Z devices that have come out this year. They run pretty good thanks to their specs and battery life can be strongly relied on. Moto Mods is an interesting concept and depending if one caters to you it could be a good fit for your mobile lifestyle. I do like the Moto Z more only because its slimmer and lighter than the Moto Z Force but can see that more expensive route that need more in their devices.