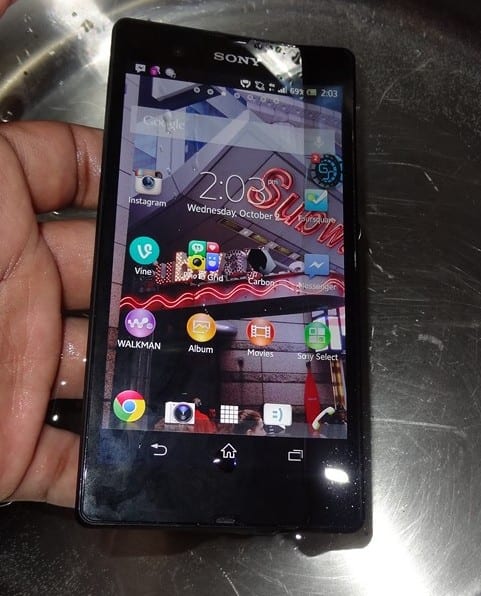 When I used to think of Sony mobile phones all that would pop in my head is those Sony Ericsson devices with some cool features but also sometimes awkward designs. Everything from sliders to Walkman style, Sony was trying to corner a market. I couldn’t remember the last time I craved to play with a Sony handset until eyes were laid on the Xperia Z back at CES earlier this year.

The Xperia Z looks to have tossed out everything of Sony’s mobile past and open a future that some couldn’t even fathom. Sony maybe finally diving into the mobile market and looking good doing so by going back and creating a refreshing phone.

Similar to the Sony Xperia Tablet Z, the Xperia Z is created with an OmniBalance design. A major difference between the two though is the Tablet Z had a polycarbonate backing where the Xperia Z is full on glass on the front and the back. It looks incredibly sleek and smooth when untouched but once that’s done its fingerprint magnet city. Talking about the display, it comes in with 5” of Full HD 1080p and 443ppi. It’s supposed to be shatter proof and scratch resistant which I have taken the phone around a bit and still in great condition. 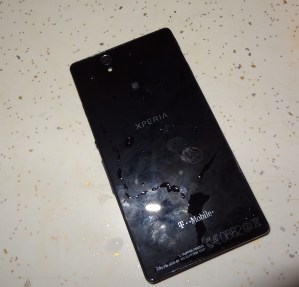 The design of the Sony Xperia Z is what makes it an outstanding change from the usual candybar plastic backed cover phones we have grown accustomed to over the past few years. It’s more of a square block similar to the Nokia Lumia 810 I covered awhile back but much more elegant.

If you make your way around the phone there is four pull out tabs concealed along the border of the phone. There is a USB port, SIM card slot, MicroSD card slot, and of course for your headphones one on top. They may blend into the phone a bit too good as first glance I couldn’t locate the USB port slot.
Another tweak I wish was done to the hardware was possibly add another speaker. There is one on the bottom right side of the phone and you can basically cover it with your finger. Unlike the Z Tablet there was multiple spots this leaves listening to the phone without headphones or a Bluetooth speaker disappointing.

The Xperia Z was announced back at CES 2013 and at the time its specs were highly impressive. Time has passed and while the Xperia Z specs sounded great back then, they aren’t exactly at the top of high-end anymore. Its running Qualcomm’s MDM9215M / APQ8064 Quad-Core chip with 1.5GHZ which gives it some preppy kick mixed with Android’s Jelly Bean 4.2 software. Alongside the processor is 2GB of RAM. Haven’t experienced any freezing or incompatibly issues while putting it thru strenuous activity whether I had 100s of apps open or recording hours of HD video.

Speaking of hundreds of apps and HD Video the Xperia Z comes built with 16GB of memory inside but if that doesn’t hold you over you can pull open one of the waterproof flaps and stick a MicroSD card of up to 64GBs inside.

As the Xperia Z is a mirror of the Xperia Z tablet (in my eyes) it also has that oh so great feature I like which is Battery Stamina. If you’re not sure how this works, basically once the feature is enabled it will help you save a significant amount of battery life. How it does this is by disabling Wi-FI and data traffic. I have left it alone for days and still seen the phone thriving. Only thing is once you do turn it on, you’re bound to get bombarded by notifications (if your popular that is).

Throw it in the Water

What peaks everyone’s interest about the Xperia Z is the ability to work with water. Its IP57 certified so you can dunk this bad boy in up to three feet of water and up to 30mins. Also its IP55 certified as well which makes it dust resistant. Testing it in water it’s good as long as you don’t want to press any buttons underwater. The screen can’t sense anything being fully submerged. Cool for recording video but not snapping shots on the fly. Otherwise if you get some occasional splashes, drop it in the sink or whatever you happen to do it should hold up well.

Bad thing about software is there is always something along new along the horizon. The Xperia Z comes packed with Android’s Jelly Bean 4.1.2 At this point 4.2 has come and gone, we are already in 4.3 land with talk of 4.4 around the corner. Besides that it’s a smooth running OS as I like to call it Sony’s concoction of Vanilla android. There isn’t really an extreme amount of bloatware moreover its usual Sony applications and the layout doesn’t feel cumbersome. Navigating from various menus and applications was great and not hell with some mobile companies’ interfaces taking over the phone. It was a pleasant experience and enjoyed it.

Sony’s Music Unlimited App is trying to fit in the music streaming app realm of heavy hitters such as Google Play Music, Spotify, and Rdio. Now I have used all of them extensively and Sony’s is easy for just listening to music. Trying to download a simple track takes you into various steps. Creating a playlist, making sure its available offline and other motions to go through. At $9.99/monthly I couldn’t see why to steer away from other alternatives unless you play on using it with your PS3 or upcoming PS4.

Since having the Xperia Z I have put the camera to use in just about every scenario imaginable. From going out to eat which is one of my favorite things to do, taking shots outside, inside and even at Philly’s Made in America concert last month. The 13MP with Exmor RS lenses helps to take some pretty impressive shots. The camera can take a second or two to take shots which isn’t great when you’re trying to catch something at the moment, but once it does get to picture taking the shots are crisp and sharp.

As for the video recording, being that the phone is so light I was able to stick my rather large arm over the crowd various times and shoot tons of video with the Xperia Z. Whether I zoomed in and out, or moved the camera around to pan from the stage to the crowd it kept an excellent focus.

The Xperia Z maybe the best smartphone Sony has ever created. The battery life isn’t bad from the amount of hours I put into matched with the Battery Stamina feature. Picture taking is great but could be faster with the second delays. Main gripes is the speaker is horrible compared to other devices and those concealed ports are hard to open without nails.

The Sony Xperia Z is a great alternative if you’re a T-Mobile subscriber and looking for a waterproof and dust resistant phone and maybe trying to get away from the likes of Samsung and HTC as they reign supreme as far as android smartphones are concerned.