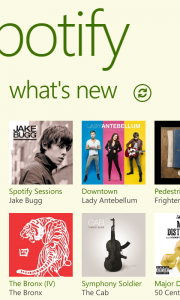 Looks like Window Phones are picking up some steam getting more of the premier apps under its belt one by one. The latest one to join the Windows Marketplace is Spotify. Spotify if you don’t know is a streaming music program that gives you access to unlimited amounts of music. The best way to utilize this feature is through being a paid subscriber as you get access to creating endless playlists, no ads, and song skipping. Also other features such as cross fading are available.

First thing you will notice using the Windows Phone 8 of course is the layout. It has a more stylish vibrant UI then the android version. With Android its more of a list layout. With WP8 is more of a cover flow design. As with most WP8 apps its snappy and loads pretty quickly on the Nokia Lumia 810. 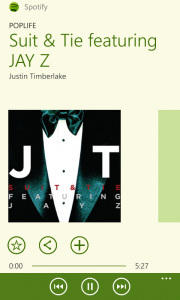 A cool feature that defers from the Android version is the option of how you want to view your playlists. There is the traditional way of selecting and going down the list or clicking on the down arrow and swiping thru cover arts one by one.
I’m glad to see Spotify has hit another platform as it is a very good streaming music program if the $9.99 monthly subscription is used. Also there is a Desktop version that syncs with your mobile playlist and vice versa.

Spotify is free now through the Windows Marketplace and also available on other mobile platforms such as Android and iOS. If your a first time user you can try it free for 30 Days. Now if we can just see it on Blackberry…