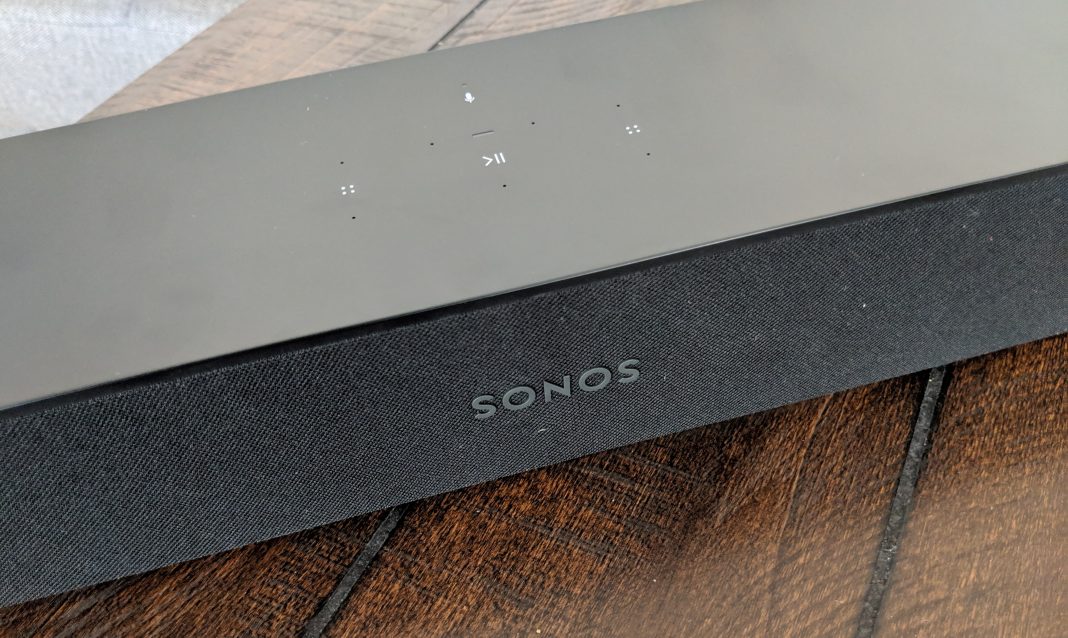 If you have used or setup soundbars they either been too wide, too bulky or missing some advanced smart features to assist you on your daily routines. While Sonos had created the great room filling PlayBase couple years back it was missing some things such as HDMI and voice activation. Sonos One brought in voice activation w/ Alexa but alas wasn’t a smart speaker. With Sonos’ Beam that arrived on the scene last year it seems to bring everything that you could want in a smart soundbar. But is this small compact audio box able to fill your ears with bliss?

When you first unbox the Sonos Beam you will have to admire the craftsmanship of the device. Its cylinder shaped that is continuous from end to end while also with fabric wrapped on the front as well of the back for audio purposes of course. Sonos was nice about to provide this solid black colorway but it also available in white. The Beam measures 25ins (25.625) long and makes it look smaller than the Sonos PlayBase, but that speaker measures about 28ins. The depth of the Beam is just under 4in (3.94) which makes it so compact looking. I love how sleek the Beam looks so the Sonos logo embossed on the front while the top has capacitive buttons for volume controls, Play/Pause, and of course a mic button for its Alexa enabled capabilities. There is also LED light which will tell you the status of the Beam.

On the back side of the Beam is ports for Power, HDMI and Ethernet. The HDMI port can be used as an optical cable port with the included connector. Also, in the box is a power cord and HDMI cable. Those used to a remote with their soundbars the Beam like the rest of Sonos devices rely on the Sonos app for control.

The Sonos Beam can be connected via Ethernet but also can rely on Wi-Fi which is how I have my device connected to my network. This is good as I didn’t have any ethernet cable lying around anyway. Also, you have the option to connect the Beam to your TV either thru the traditional optical cable or HDMI. Only thing is connecting via HDMI you will sacrifice a HDMI port on your TV as the Beam doesn’t have an output on the Beam which I kind of wish it wasn’t lacking. I was going to go for the optical option but without HDMI you miss out on the TV controlling functionalities with Alexa but that’s also if your TV is equipped with a HDMI-ARC port. If your TV is within the past possibly 3-5 years it most likely is.

Once you decide how to connect the Beam, you have to go thru the usual Sonos App setup. If you already have Sonos devices the setup is seamless as it will recognize it in your network and its smooth sailing from there. If you don’t have a Sonos device the app will pretty much walk you through everything such as creating a user account.

When you are all good to go you can go head and try out Amazon’s Alexa. As I’m familiar with using Alexa on the Sonos One device it’s the same use here. You can use her for voice controls, loading up your Spotify playlist and controlling other devices. Also supports ESP (Echo Spatial Reception) so when I say “Alexa” this device and my Echo Dot in the kitchen don’t clash. Funny enough that happens with my Google devices sometimes. I am waiting for Google Assistant support though as I’m a heavy user and Sonos hopefully will release it one day. 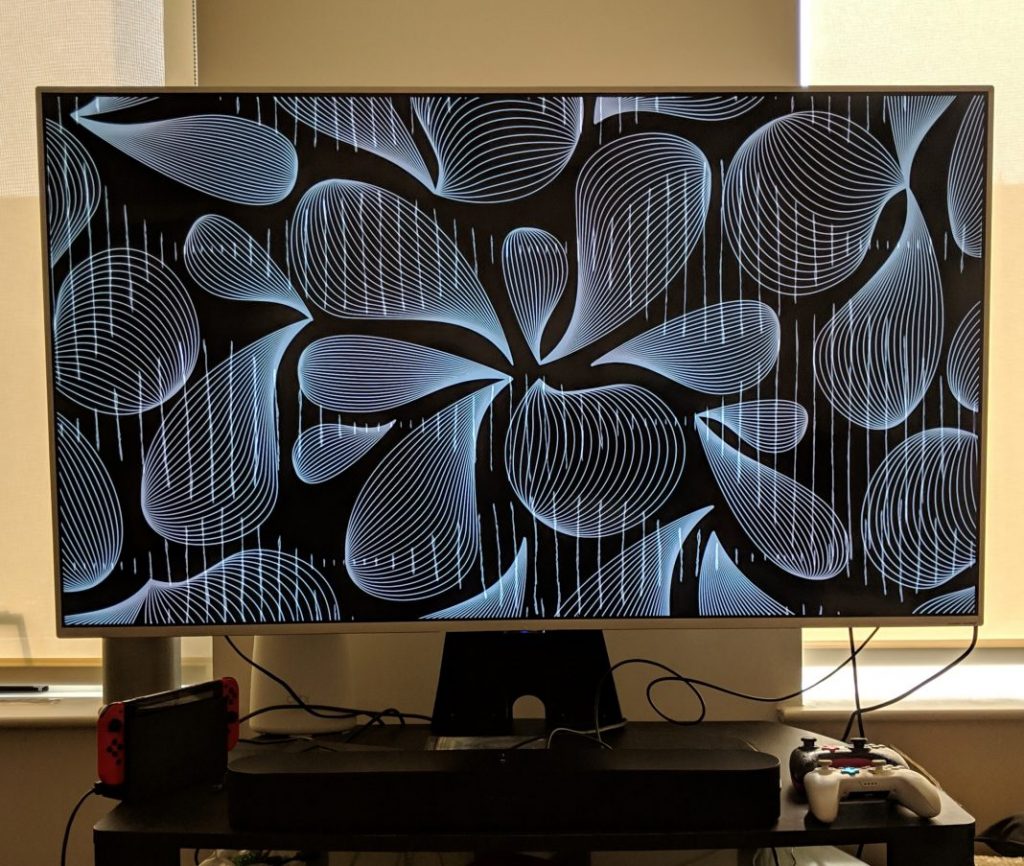 Even with it size the Beam is packed with a decent amount of audio equipment such as four woofers, one tweeter and three passive radiators. Its small presence serves off some crushing audio that you wouldn’t expect. I have its setup in my living room as I expect that’s where the average consumer might be putting one of these. It does a good job of filling the room with audio whether I’m sitting at my desk on one side or in the kitchen on the other end. Music sounds crisp and clear with no distortion even at the highest of levels. Mics are good as I can shout out for Alexa and can be heard.

I have used it to watch my usual wrestling shows on USA network or NBA games on ESPN on TV via a TiVo for broadcast TV. Beam has also been utilized with an NVIDIA Shield for accessing my various apps such as Netflix and Vudu for my movie streaming or binging mostly in 4K HDR. There is one thing I noticed while viewing content though is there is a slight 0.5 sec audio lag when watching movies say on Google Play Music or Vudu. Watching stuff on TiVo (cable programming) its less noticeable. From reading online it looks to be a TV/Sonos connection. Where it could more so the TV sending the signal to the Sonos. 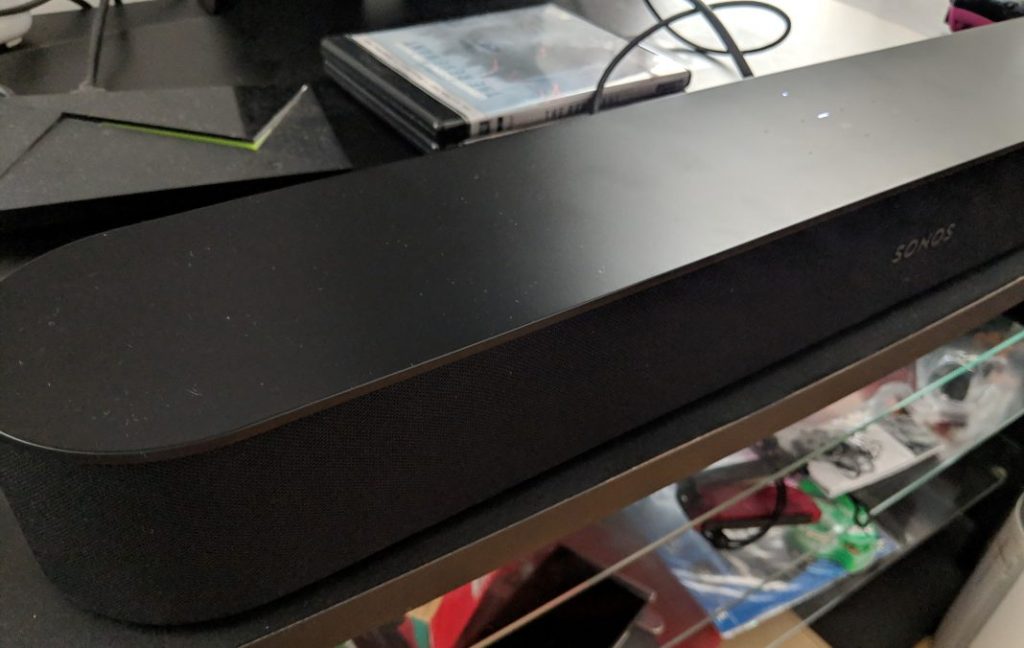 Even with its here/there minimal audio lag at times, I’m still a big fan of the Sonos Beam. Its easy to setup and Alexa enabled. If you have other Sonos speakers in the household its connection is seamless. Best thing with this soundbar is you can build upon it adding Sonos Subs or Play 1s/Ones to create a surround system if you decide to. Sonos Beam comes in a healthy price hitting $399.99 and is available in the pictured Black or white.