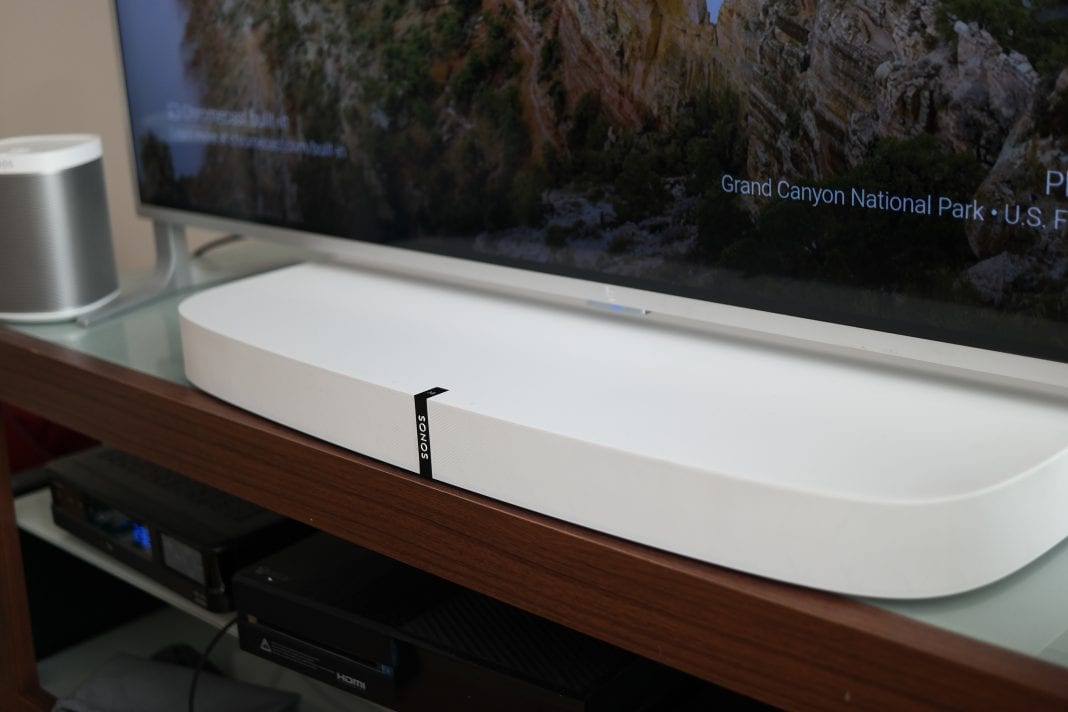 There are two devices I tend to use a good deal in my household. Those two would be my TV and an NVIDIA Shield for all my media streaming purposes. While my TV has built-in Harman Kardon speakers I still would have to say TV speakers aren’t the best to use for gauging audio quality. Now this is where Sonos comes in. I never been the type to have tons of wires all over with speakers here and there. My dad enjoyed doing it and I liked watching but never got into it. But it would present some incredible audio. So this is where Sonos came in. With the Playbase they wanted to help you achieve surround sound goals even if you aren’t on a surround sound budget. 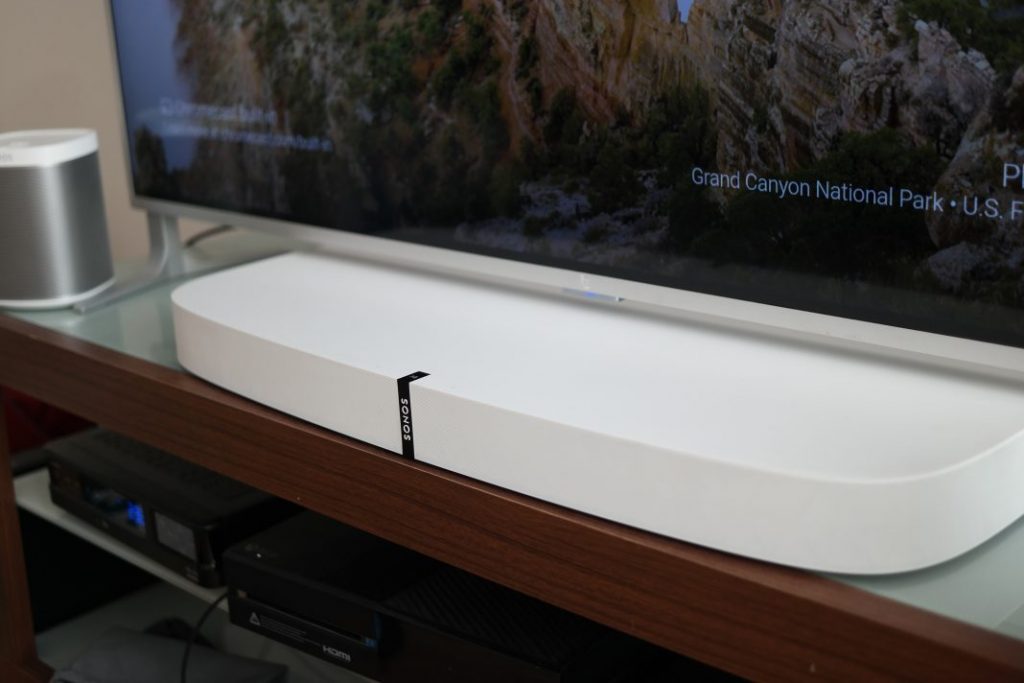 Like the name, the Playbase is a long soundbase that is slightly over 28ins in width, a bit over 2ins tall and depth right under 15 ins. Using the white model it has a very clean design profile with at first glance all you see is the Sonos emblem branded on the front. Get a bit closer and you will see three capacitive buttons for volume controls, track changing and play/pause. Located within these buttons is also a LED light which will indicate different changes such as updating, muting, etc.

If you flip over to the back you will see the Playbase has just three ports. One for Ethernet, Optical Digital Cable, and Power. Yes that means there is no HDMI cabling which in modern days is surprising. Sonos relies on your TV to do all the heavy lifting with all devices passing through it and to your PlayBase and vice versa. 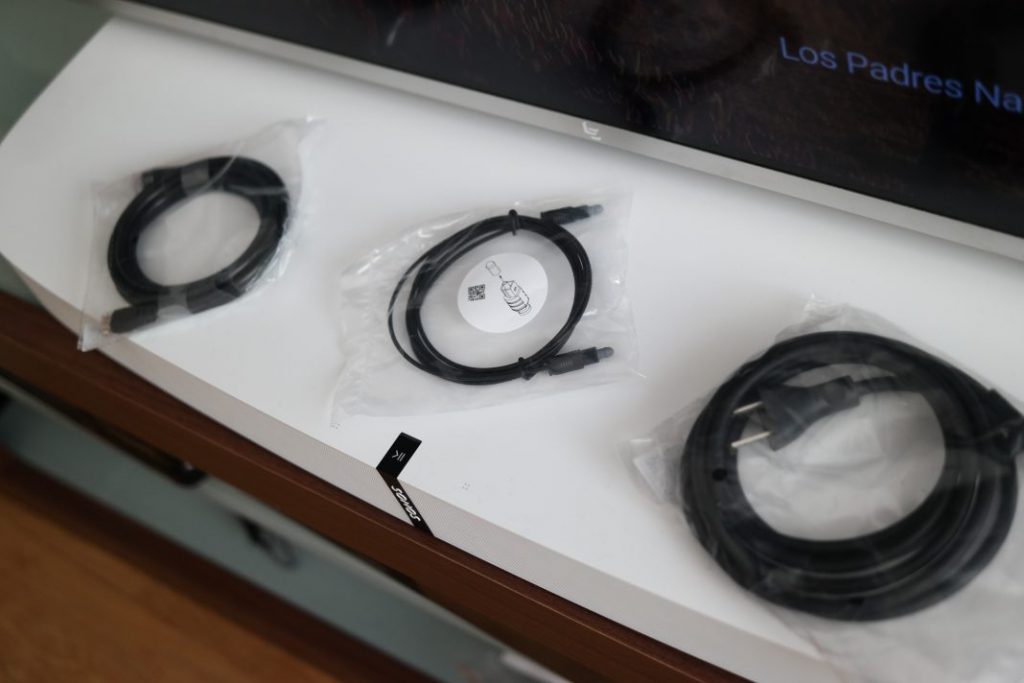 Speaking of heavy lifting with the depth of the Playbase you can’t typically put it in front of your TV like others but you can either slide it under your TV if the legs are high enough(like mines) or if the base is smaller place it on top as the Playbase is strong enough to within a weight of 77 lbs. 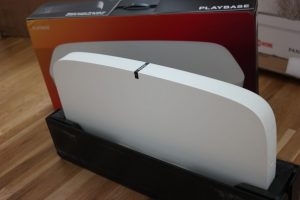 Once you unbox the Playbase and plug in all the components you will be up and running pretty quick. It all really incorporates you running through the Sonos app on your phone and following the steps. If you already have a Sonos device setup is even easier as it will simply add the Playbase to your account shaving some time off.

Even with Sonos Playbase being one of the bigger devices in their portfolio it works just like its smaller flagship speakers such as the Play:1. While the Playbase is hardwired it also has WiFI capabilities. If I pickup my android device and open Google Play Music or Spotify it will have Playbase as a option with no problem. You can also always go the SONOS app route too which works flawlessly. I tend to use that more when a iPhone is in reach.

Going back to the Play:1, I keep that in my living room and the PlayBase in the bedroom and how they work together is fantastic. Always been a fan of the app support Sonos presented and how fluid it was jumping from say iHeartRadio for my local radio stations to my subscribed music streaming apps.

While you can’t see from the outside the Playbase is filled with ten drivers (six mid-range, three tweeters, and one woofer). With such a mix of drivers you are getting sound quality catered to your every need. There are days I listen to music and the Playbase just has that thumping bass where I my neighbors are going to come knocking on my door. 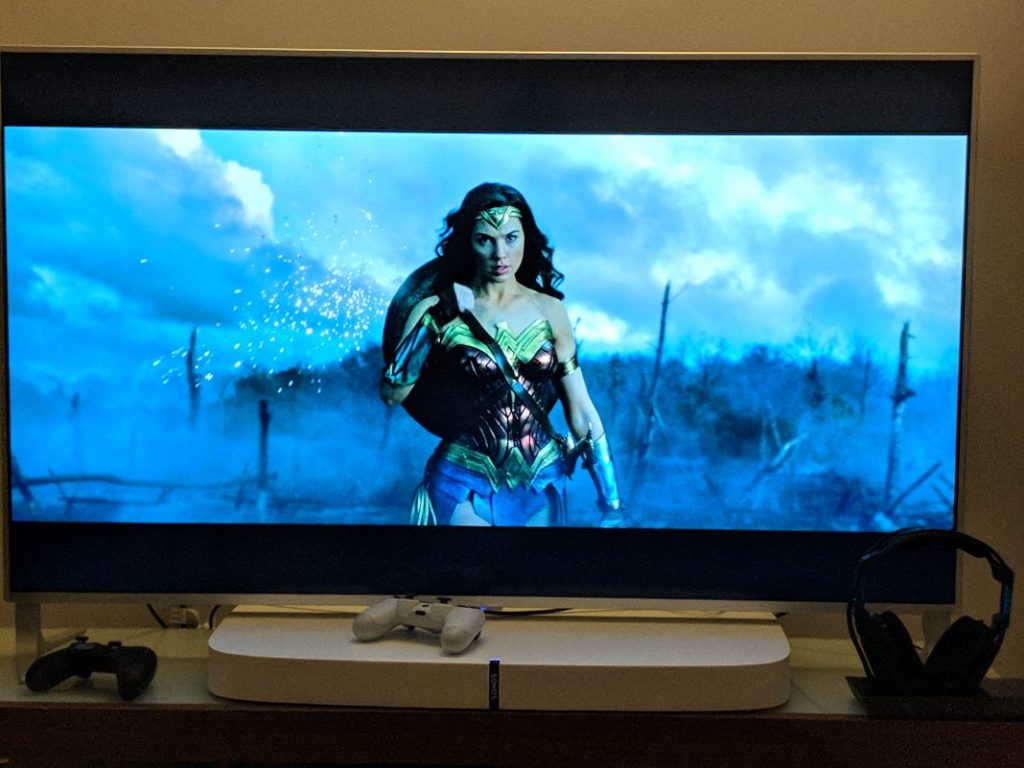 I have used it to watch everything under the sun from Wonder Woman in 4K UHD, playing Shadow of War on Xbox One X or getting my daily dose of wrestling either on cable or WWE Network. Sonos has been able to tweak itself to every occasion and handles itself pretty good.

If you want to fine tune your Playbase with their Trueplay feature unfortunately you have to grab a iPhone as its only iOS and even at this time still doesn’t support Android. This can be contributed to the various phones and their different mics but still.

Now I been using the Playbase for months on end and have zero complaints. Now will this change down the line? The fact there is no HDMI or DTS support could be a deal breaker for some. This coupled with its high price tag of $699. If you want to up the ante of your home theater you can add on Play speakers and a Sub if you need. Besides that the sound is pristine on the Playbase and setup is easy for those that don’t want to fumble around with wires left and right. The Sonos speaker ecosystem is a marvel and hard to trump.