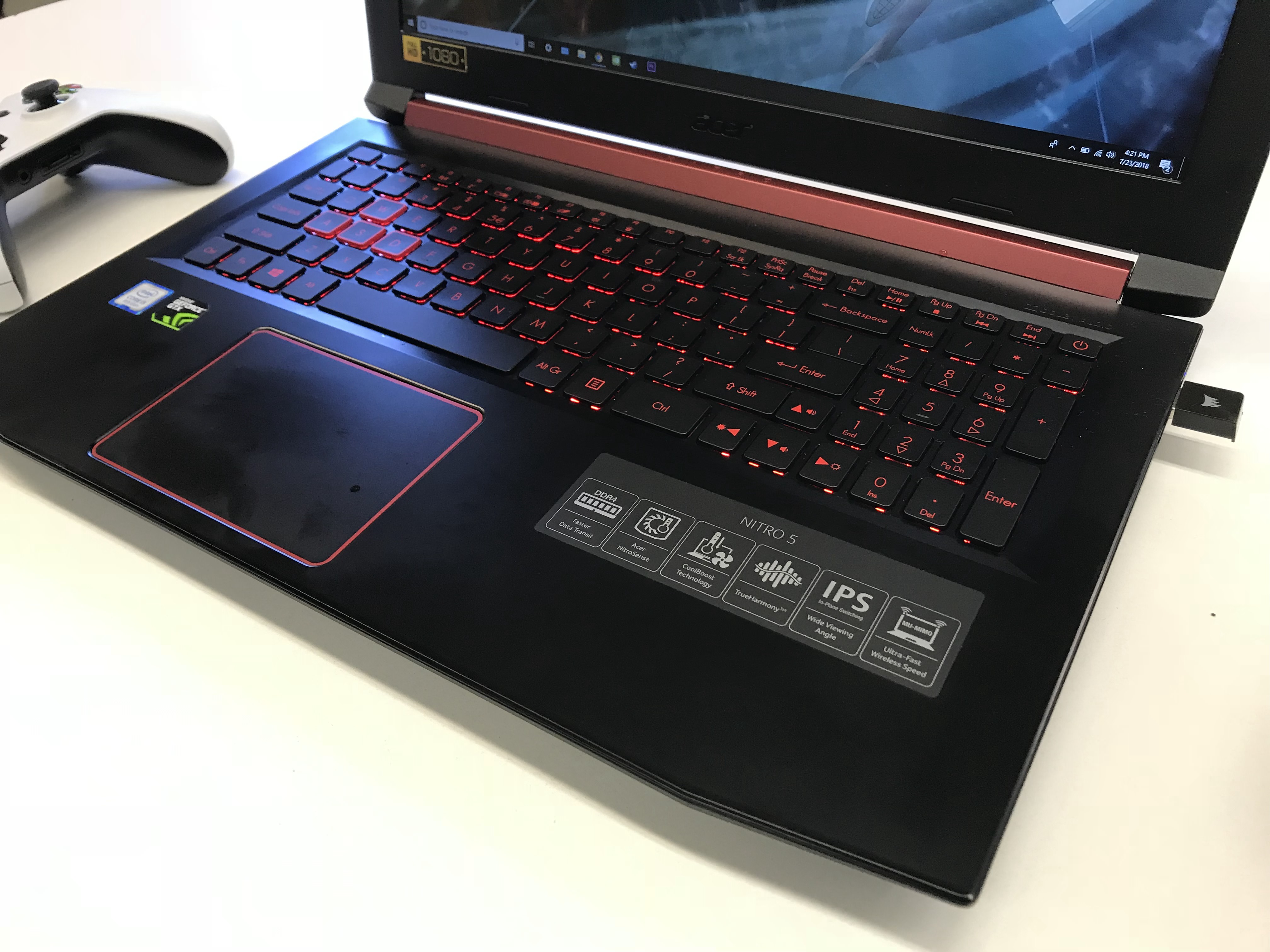 Gaming can get really expensive, if you let it. This is especially true if you want to game on a desktop PC or a PC gaming laptop. Within the past couple of years the cost of things has seen a shift. What would normally cost a fortune is now much more affordable. Sure, you have your high end stuff but nowadays it isn’t your only option if you want to game on PC. “Budget” isn’t what it once was.

Typically when you hear the word budget you might automatically think cheap or poorly made and and sometimes that’s true but in this sense it isn’t the case. Budget in the case of the Acer Nitro 5 just means a whole lot of bang for your buck. I’ve been using this laptop for a couple of weeks and it’s a solid option to play quality games for under $800. No BS.

When you’re judging a laptop you have boxes to check off in terms of what makes it worthy of your purchase. After all, you’ll be stuck with it for the next few years so the first thing that you should always start off with is the design and build quality. 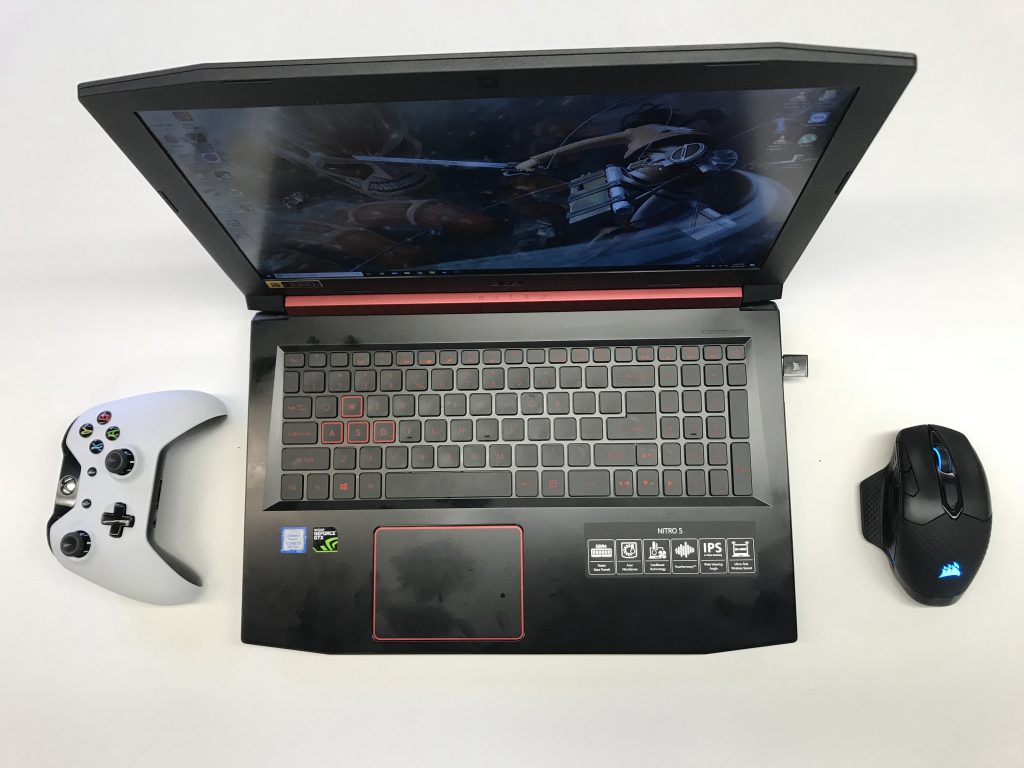 The Nitro 5 is made completely of out of plastic, it’s sturdy and very clean looking. No risque design or anything that’s attempting to be futuristic. The Nitro 5 is pretty simple. The colorway is Shale Black with hexagonal type edges with red accents along the hinge and around the touchpad. The screen itself is 15.6″ with fairly thick bezels and the webcam up top. Keyboard is well spaced with the WASD keys highlighted and small number pad off to the right. The Nitro 5 looks like a normal laptop would but you know it’s for gaming once you flip the lid. 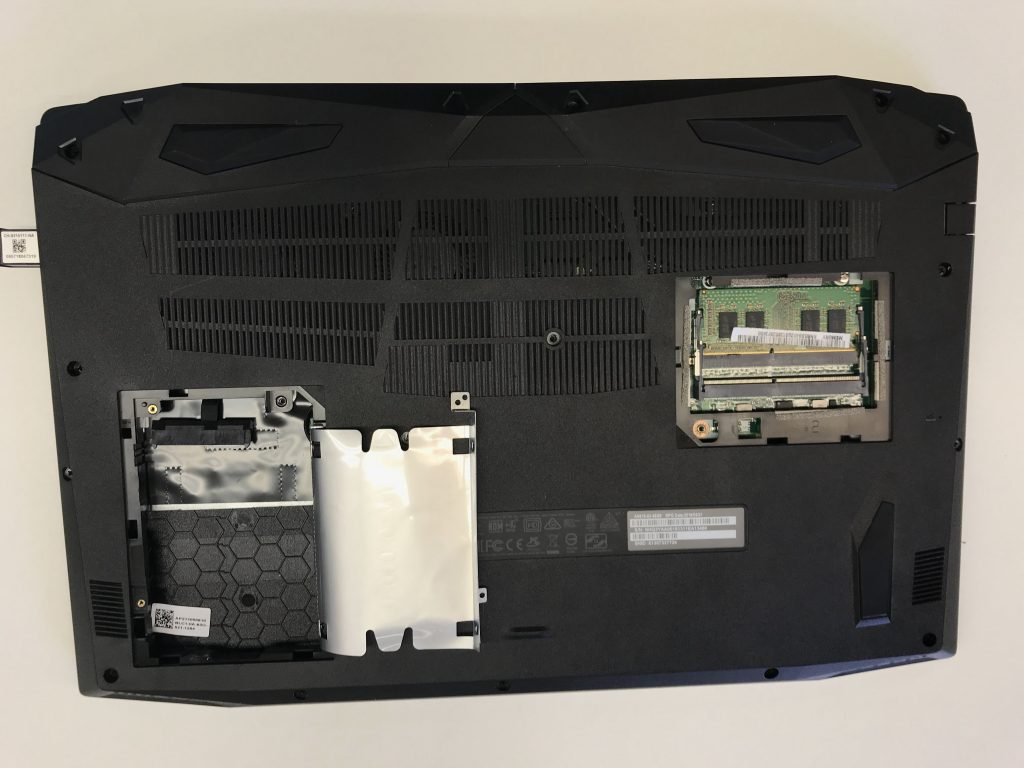 The version I’ve been using for this review is a more than capable laptop for your everyday needs and gaming. This Nitro 5 comes packed with an 8th-gen Core i5-8300H at 2.3GHz quad-core processor, an Nvidia GeForce 1050Ti, 8GB of DDR4 RAM (expandable to 32GB), a 256GB SSD (also expandable with the additional HD tray), and a 15.6-inch IPS 1080p screen with a 60Hz refresh rate all while running Windows 10 Home.

This version of the Nitro 5 costs a little bit more than the base configuration but it’s still very affordable and once you start to use the Nitro 5, you’ll feel like you’ve gotten your money’s worth.

You Can Really Get Your Game On With the Nitro 5 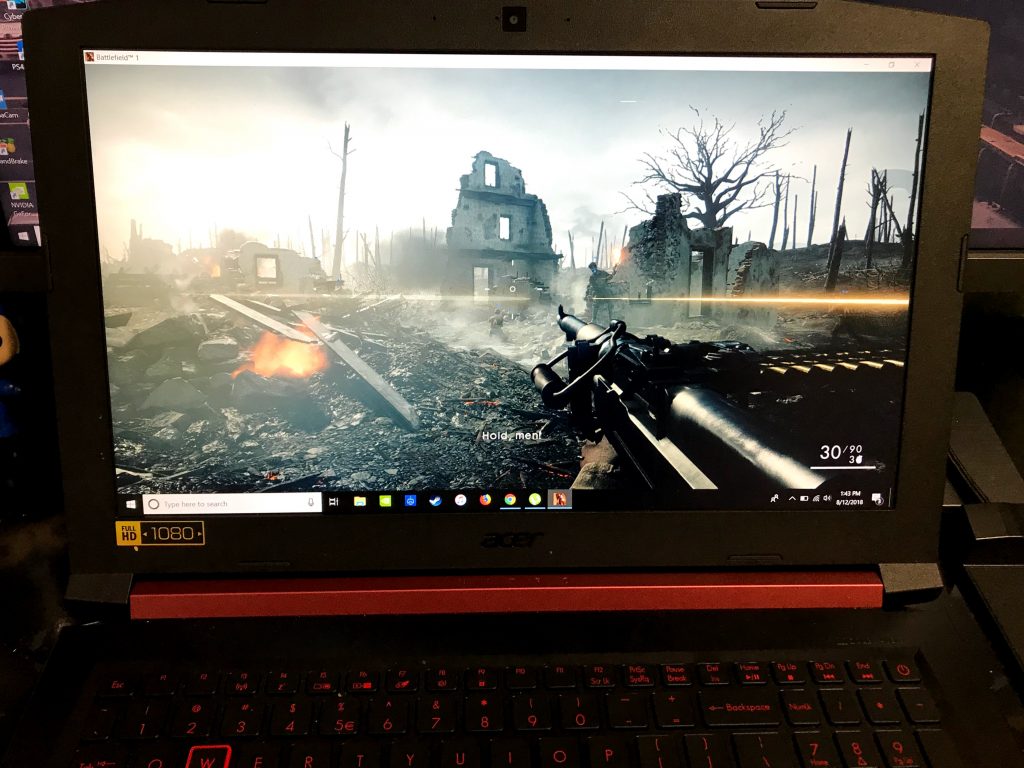 The Nvidia 1050ti built into the Nitro 5 allows you play all types of games. Most of the games you want to play at the very least. Some better than others and you’ll only be able to play the games at 1080p since the screen is locked in at that resolution. Playing more complex and detailed games will push the GPU to its limits if you want play consistently at good frame rates and you’ll most likely have to lower your graphics settings. Project Cars was one of those games where I had some dropped frames. PvP games where refresh rates matter a lot more the 60Hz refresh rate may hobble you. PUBG or CS:GO may play a bit differently for you but they’re not at all unplayable. As far as my personal gaming experience, I’ve played Battlefield, Destiny 2, Rocket League and Overwatch and a lot of emulated titles. All of those games played just fine at low and medium settings. I was averaging about 45-51 fps. The higher settings is where I ran into trouble but if you just want to play your games the 1050ti will get the job done.

The screen on the Nitro 5 is probably it’s one shortcoming. It’s only 1080p and it’s not a very bright screen at just over 250 nits. The panel is a 1080p matte IPS format so because of the matte finish, colors aren’t going to pop and occasionally things will look washed out and kind of dull. Oddly, despite how colors may look the games you play and the things you watch won’t look terrible. It’s a situation where you have to judge whether you care about color output or you just want to watch videos and game. Everything will look pretty good but of course things won’t look as good as a higher end 4k machine but it’s not terrible. 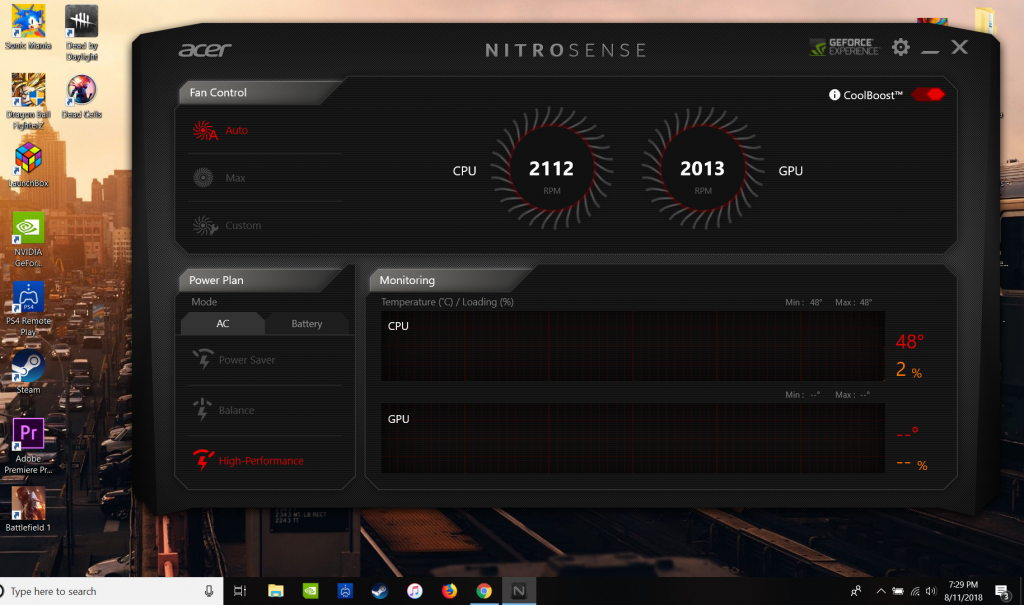 NitroSense was a big help in managing how the Nitro 5 reacts under load. Fan and temperature management can be overwhelming things if you don’t know what you’re doing but the NitroSense software makes it easy to manage your fans, look at your temperatures and even have custom settings based on how you use your Nitro 5. If you know you’re going to be playing a graphically intense game then crank up the fans, if not, then leave it in auto. It’s a cool software that most gaming machines have but not as manually demanding. Simple and helpful tool.

Battery life on the Nitro 5 was pretty damn good. I used the Nitro primarily to work, write and surf the web with multiple tabs open and when I did I would get about close to 4.5 hours give or take when I worked until the battery died. I did this with the Nitro at 70% brightness and in a balanced power setting. Not too bad. In high performance and full brightness I lost about 30 minutes and I was able to work for about 4 full hours before the battery died. My weird work flow also allowed me to gauge how the Nitro would handle open and closing the lid and standby time. I would use the Nitro for 2 hours at a time and then close the lid and leave it in standby and jump back on and have minimal battery drain. I used the Nitro the way I would use any other laptop. Acer estimates that the battery life should average about 5.5 hours, I honestly never got that much but battery life held up well. The battery behaved as it should and if you’re being mindful of your usage then your battery should never die on you.

The Nitro 5 is a Good Pickup

After using the Nitro 5 for the past couple of weeks I’m totally satisfied with the performance and felt like the Nitro 5 did what I needed it do. Nothing more and nothing less. At $799 I believe the Nitro 5 is priced more than fairly. I’m quite sure you can find a cheaper machine out there somewhere and that will always be the case when buying any laptop but that doesn’t mean that because you can find a cheaper option that this makes the Nitro 5 a bad option. Not at all. I was able to play all of the games I wanted to play with very little issue. Complex games may give you a little trouble but that’s not why you buy this machine. The Nitro 5 is for the “casual” or occasional gamer. That means you can play all types of games if you aren’t planning to be competitive and don’t need the highest of specs. You basically just want to game and have a little fun for a few hours, nothing more. Are there some cons with the Nitro 5? Sure. It’s a little heavy, I would have preferred a 1060 but the 1050ti isn’t a slouch. The Nitro 5 also gets a little hot and the screen isn’t the best but these are all nitpicky things.

The Nitro 5 is a well balanced entry level gaming machine and for the money it’s really hard to beat. Coincidentally, the Nitro 5 is going on sale this week from 8/12 – 8/18 at $100 off so there’s even more of a reason to pick this machine up, especially at $699. There’s also an AMD RYZEN version of this machine as well if you’re in the RYZEN clan so you’ve got options. The Nitro 5 is a solid budget gaming machine and it’s exactly what it should be. Students can even get in on this price point. Who doesn’t want a really good machine to play some games when there’s down time. Take advantage of this great price and pick it up online HERE