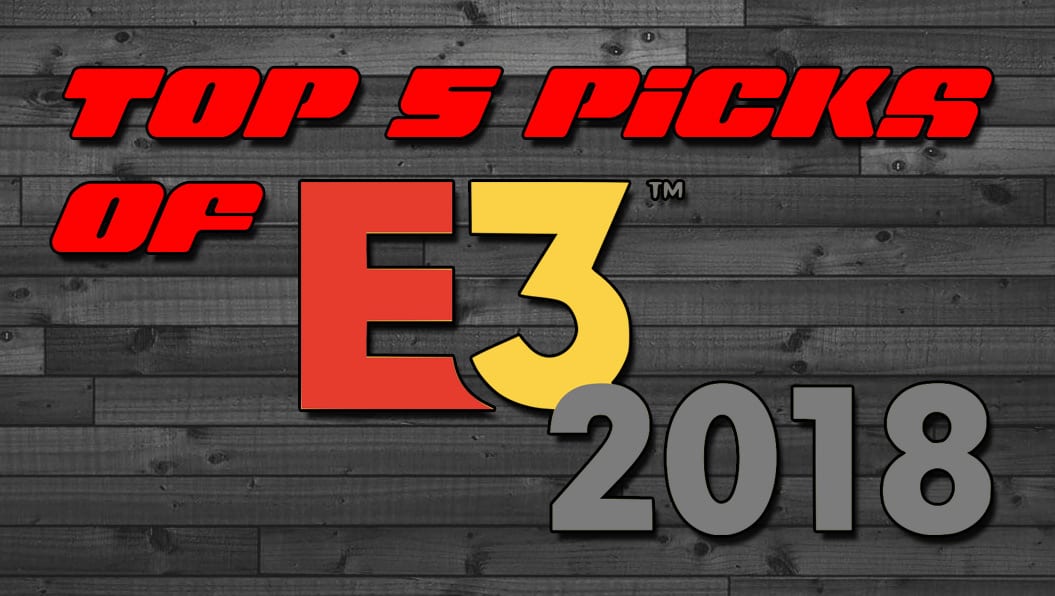 What an exciting week it has been for the gaming community. So many games to pick from it’s like being a kid again in the toy store and your mom tells you to pick one toy. You start getting confused on what you like enough. Well, in this case, my mom told me I can choose five things but I had to make them good ones. I am mainly a PlayStation gamer, but I do have an Xbox One that I use for specific games. In this E3 line up I have a combination of games for different systems, well four and one really. Four games on the PlayStation 4 and one on XBOX ONE.

Let’s get this party started with my list of top five games that grabbed my attention. (Random Order Folks, Why add rhyme or reason when it’s not needed.)

Gears of War is a game I played years ago at a friend’s house and fell in love with it. It forced me to purchase an XBOX 360 just to purchase Gears of War 3 and later Gears of War 4. The overall gameplay and movement is something I have longed for in a game. The character movement is natural and flows as you make a change in that movement. I also enjoyed the story, it told a different type of narrative and forced me to actually play the campaign mode. Watching the trailer for Gears of War 5, it did it again, it grabbed my attention and had me stuck in the story to see what was going to happen.

Destiny 2, Destiny 2, Destiny 2, I grinded the 1st Destiny just to complete it and retrieve all the trophies, in the end, I did. Spent countless hours with fellow Destiny gamers completing every Raid and every aspect of the game. Destiny 2 has started a new chapter of grinding and Forsaken is continuing that grinding.  Forsaken has me intrigued, I want, I need to know what happens to Cayde. I want, I need to know if the Queen is still alive and has her brother betrayed her and is enemies of the guardians. So many questions that need answering.

It was the release of Devil May Cry 4 that inspired me to purchase a PS3 and I had so much fun playing that game. When I saw that Capcom decided to come out with a part five I was on it. The story continues with Dante taking on demons and new ways of destroying those demons. I can’t wait to begin defeating all the demons and find out what the story is about this time. I am sure Dante has some new interesting skills to unlock and ways of killing demons. He has a slightly different look and new people going along the different quests with him.

My first experience with the Assassin’s Creed Franchise was with Assassin’s Creed Origins and the experience was one for the history books. After seeing Assassin’s Creed Odyssey, I knew that it was a game I was going to have to purchase and play. The fact that we are in ancient Greece know is really cool. You get to see how things where back then and experience a new virtual world lost in time. This is similar to the experience of exploring Egypt in Origins. It’s the overall experience that draws you into the game, along with the storyline. In Odyssey, you have an option to play as a male or female and tell a different tale of how the story would go. This also has me intrigued to see how different the story would be based on just a simple character change.

One of the Spider-Man games I played was on my iPad and that game was so much fun. I enjoyed swinging through the streets of New York fighting crime and other characters from the Spider-Man Comics. When I watched the trailer for Spider-Man and some gameplay from E3 I was all in. The way Spider-Man could swing through the air and the new ways he could fight crime reminded me of that iPad game. This time I could have that experience on a large screen instead of my small iPad. The trailer made me feel like a kid again when I wanted to have super powers like Spider-Man. The Graphics, the storyline, the movement, man oh man this game looks like so much fun.

Now, these are my top five, however, I did see several other games that I thought where amazing revealed at E3 this year. Hey, I have to be honest man I normally don’t watch E3, this was my very first year and I was extremely impressed with what I saw. I mean games like The Last of Us 2, Days Gone, COD Black Ops 4, and Beyond Good & Evil are all games that caught my interest but just not as much as my top 5.  I will be watching E3 every year from this point on to just see the future of gaming first hand.

That’s all I have to say about that (Best Forest Gump Voice), Be sure to check out what the other members of G Style had to say about E3 2018 and their Top 5 picks from the show.