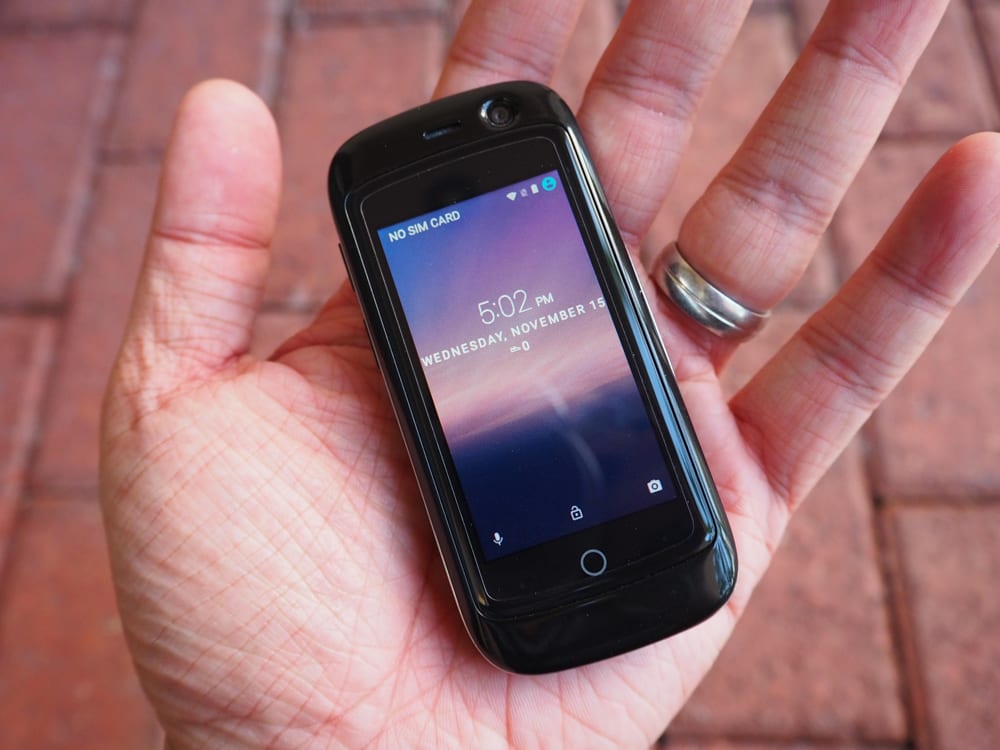 Chances are, you probably own a smartphone right now that’s bigger than any smartphone you’ve used before it. That’s because as each new generation of phones arrive, they just seem too get larger and larger to accommodate better screens, batteries, and technology. Of course if you’re older like I am, you remember when the trend used to be to make phones smaller and smaller. Remember in the movie Zoolander where Ben Stiller’s character has a tiny cell phone? Well that’s honestly how I imagined phones of the future would be like. Obviously that wasn’t the case. Don’t fret though because if you are still dreaming of that tiny smartphone, Unihertz has the perfect smartphone for you in the form of the Jelly Pro. 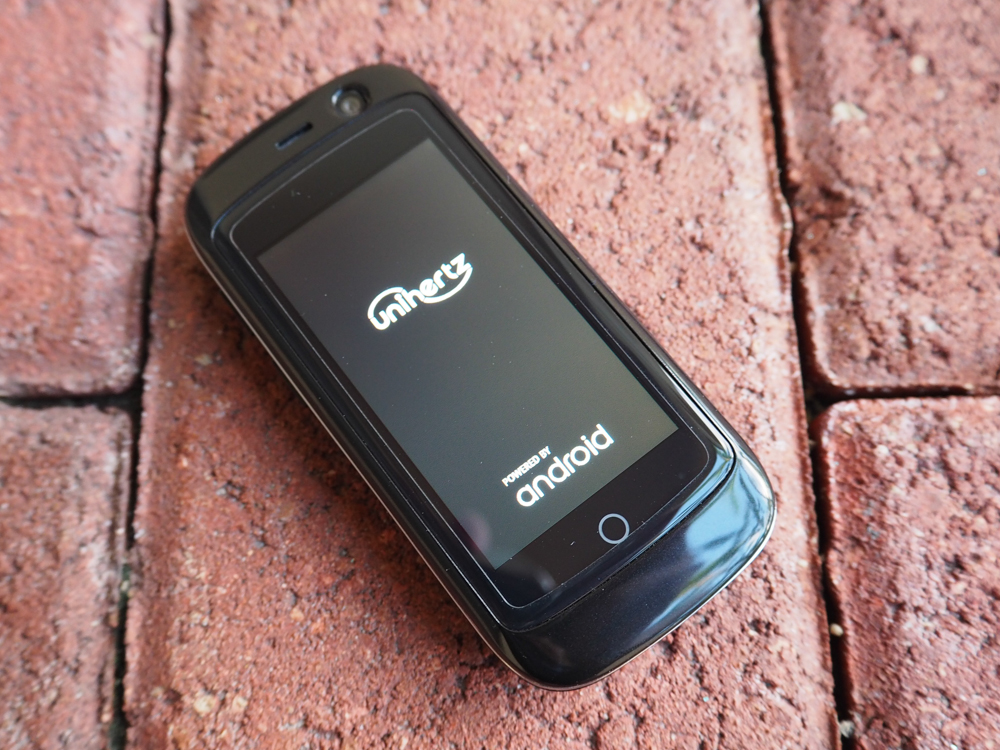 The Jelly Pro is a comically small smartphone, especially when compared to some of the monstrously sized devices out today. With a 2.45-inch screen, the Jelly Pro fits entirely in the palm of your hands and can be used one-handed with no problem at all.

The body of the Jelly Pro really doesn’t look like a modern smartphone. It’s not a small rectangular slab with rounded corners. Instead, it looks more like a pebble, akin to something like a tiny Sidekick, but without the keyboard. The curvier body shape does make it more comfortable to hold and manage.

Aside from its diminutive size, there really isn’t anything else particularly special looking about it. It’s got a single front facing camera and a capacitive home button. It’s got separate volume buttons and a power button. On the rear it also has a single camera with a flash.

The rear cover is removable and underneath you’ll find a a 3.8V, 950mAh battery which is pretty small by today’s standard, but it’s inside a tiny phone. You’ll have to remove the battery to get to the dual nano sim slots and MicroSD Card slot that supports up to 256GB.

While it is definitely odd having such a tiny phone these days, what I can tell you is that the Jelly Pro is a head turner and conversation piece. Everyone I’ve shown this phone too has remarked about how unbelievably small it is and whether or not it was truly a real phone. They’re amazed when I turn it on and many want to snap a photo of it in their hand. They’re also dumbfounded when I pull this thing out of my little coin pocket in my jeans that no one uses for actual coins. If you’re the type that likes attention, the Jelly Pro will get it for you.

One last thing here. The Jelly Pro seems quite rugged. It might be because of its tiny size and plastic build, but I think this thing would survive a drop way more than much larger devices. Plus it has less mass so I don’t think a drop would affect it as much as a heavier device and one covered almost entirely of glass. 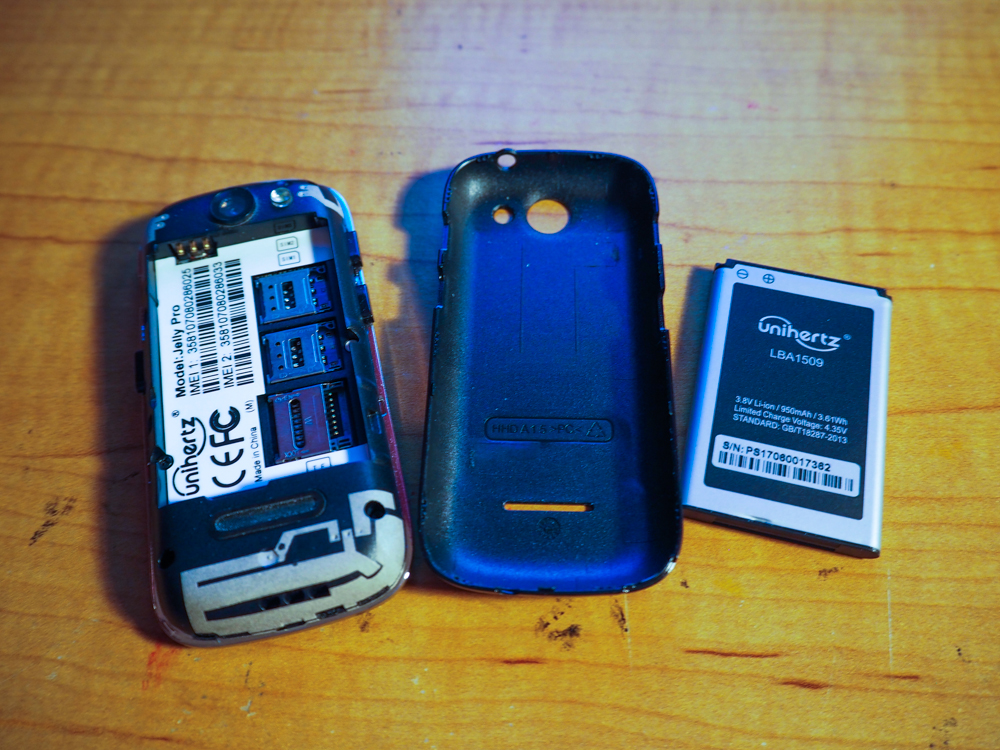 The Jelly Pro is by no means a powerhouse, though it does run a quad core chip with 2GB of RAM. A big surprise here is that it’s running Android 7.0 and not some old version of Android you’d probably expect. Also since this is an unlocked phone, you can use it on a variety of networks, though I’d check to see if it supports your network’s frequency bands before purchasing. It also has the latest Wi-Fi standards, Bluetooth 4.1, GPS, and G-Sensor,Compass, and Gyroscope sensors. For those who might rely on this in case of emergencies, the Jelly Pro also has a built in FM radio tuner.

The rear camera is a 8MP unit while the front is a 2MP unit. That’s not anything really mind blowing but in a pinch, it’s not bad at all. I’m not really going to talk much about the camera here but what I will say is that the photos it takes are usable. They are better than old school flip phone cameras but not quite as good as the current crop of LG V30’s and Galaxy S8’s. You can definitely use this for quick photos, but don’t expect this to take the place of a real camera. 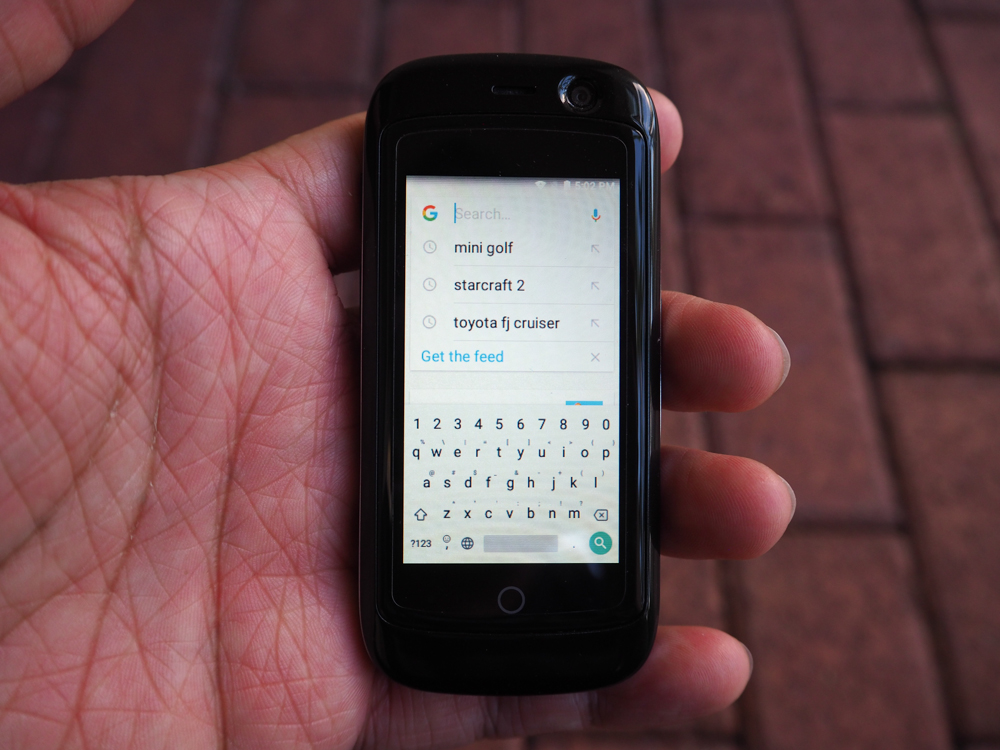 I was told that the Jelly Pro really isn’t meant to be a primary phone so don’t expect to buy thinking you can live with just this. I mean it’s possible you could use it as such, though I wouldn’t really recommend it, especially for those who are on their devices all the time, and I’ll explain why.

As a phone, the Jelly Pro works really well. Dual sims means you can have two numbers on it, which is great for international travelers. Since it runs full Android 7.0, you can do pretty much everything on this that you can do with your regular smartphone. You can save contacts, send texts, emails, take photos, and run apps. The question here though is do you want to do that all the time?

You see, as a phone, it works because you just dial some numbers or look up a contact and just talk. You don’t really have to use the screen much. For everything else, it can be a bit of a mission because with a tiny screen means you also have a tiny keyboard. If you have chubby fingers, typing on the keyboard is going to be incredibly difficult. The only suggestion I have for this is to download the Google Keyboard so you can use the swype function to type and have it predict the words you want to use. I found it to be the quickest and most accurate method.

Another issue is that some apps you download don’t scale properly. You get instances when some apps are just sized way to large and you can’t see some of the elements on the screen. Not only that, some have some really tiny text in the menus that are incredibly hard to read at that size. However, if the only apps you use are social networking apps like Twitter or Facebook, I can tell you that those apps work pretty well. You can read everything on those and they look like cute tiny versions of themselves.

For the most part, the Jelly Pro works very well despite the tiny keyboard and occasional app scaling issue. I can see why they suggest using this as a secondary device if you’re the type that usually carries two phones on you. I do this sometimes and it was always a hassle carrying two regular sized smartphones on me at once. With this new setup of my large device and the tiny Jelly Pro, it’s much easier carrying both in my pockets.

Lastly, my 6 year old daughter is in love with this device as she says it’s the perfect size for her tiny hands. That got me thinking, would this be a good device for children considering its size, price, and more rugged build compared to much larger devices? Hmm. That’s definitely something to think about. 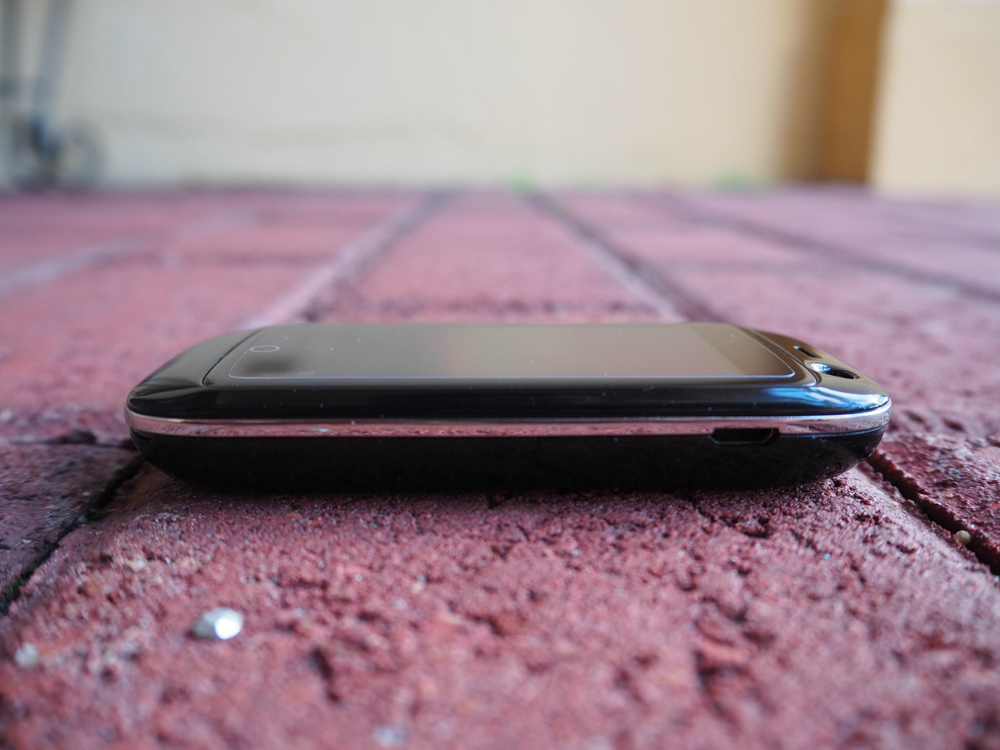 When I first saw the Jelly Pro online, I honestly didn’t think it was going to be as small as it really is. I mean it does look small online but it’s not until you have it in your hands that you can truly appreciate just how small it is.

This is a device that is following its own path and filling a niche that used to be a thing and one that I didn’t know still existed. It really makes a case for tiny smartphones and I can see how owning one is quite useful and a great compliment to larger smartphone. There really is no reason to carry around 2 large smartphones, let alone pay that much to carry a secondary device just to have a second number. For me, the Jelly Pro makes a great secondary work phone where I can use it to make and receive calls, check messages, and occasionally check my social media networks.

It works for that. Everything else, I suggest using on your regular smartphone for the heavy lifting and keep the Jelly Pro as a nice, solid backup for phone calls and occasional messaging and photos.

So what would you do with a tiny phone like this? Let us know in the comments below.