NitroPlus Blasterz is back for their 15th anniversary with the follow up, NitroPlus Blasterz: Heroines Infinite Duel. Yes a lot to say for a title, but the gameplay for this 2D anime fighter is very fulfilling on what it aims to provide. Anime heads will rejoice like I did seeing familiar faces and landing easy to execute but hard to master combos on foes.

If you all are familiar with the Arcana Heart and AquaPazza fighting game then be in for a treat as the same devs crafted this fighter as well. As an “anime junkie” it is always a treat to see your favorite anime characters duel it out in a video game. For this project EXAMU teamed up with publisher, Nitro Plus, to give us a cross up 2D Anime fighter with characters from Fate/Stay, SUPER SONICO, Psycho-Pass, and Arcana Heart to name a few.

The visuals of Anime are strong, as the dope cinematic intro for game gets you in the mode for some type Otaku pleasure but fails to follow through for the additional content within story mode. When it comes to any fighter you traverse through arcade mode to get a sense of what the premise of the story may be for each character, along with their connection to the story, but this achievement fell short. Getting through the dialog scenes alone was like a job, then having to view just a background with static images of the characters became downer.The story is a bit incomprehensible as to what is going on and how all these bad ass ladies from various franchises are tied together. 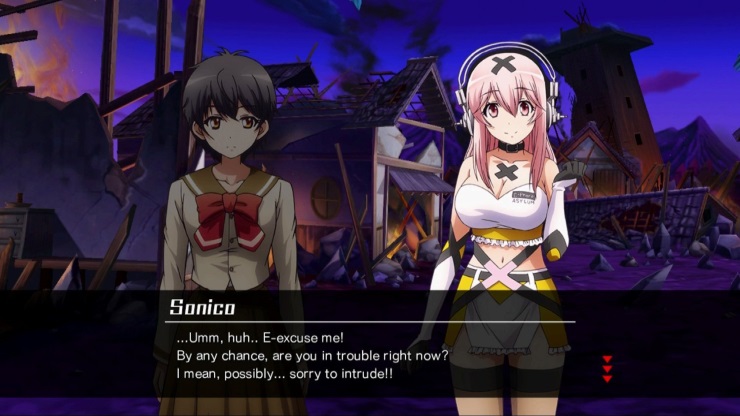 In short, an ancient unknown entity stirs up drama causing dimensions to intertwine. This so called evil entity draws in women from various universes in hopes to cure its boredom by sparing in efforts to not destroy the world. A bit cliché, but we know why we are here, and that is to test out these Anime characters with some sick combos. To cut some slack since it is a $39.99 title, the budget may have not been there for full on anime cinematic presentation like Guilty Gear. None of the less, the excitement is picked back up when it is time to fight in between the story.

Players can select a main fighter and two partner characters from a roster of Nitro plus’s most popular bad ass ladies. What I love about NitroPlus Blasterz: Heroines Infinite is the easy pick up and play mechanics. It may be an easy fighter to execute combos, but I will say it is a challenge to master. Most move-sets are triggered by a quarter circle motion with specific buttons to pull off moves. Pulling off and stringing together your own combos along with the type of partners you choose was the biggest highlight for me. The fast paced gameplay gave me that Melty Blood cross Marvel vs Capcom 2 feel. You can also skip story modes and go to Score Attack which is a similar to modes like Survival. There you can play a type of Arcade mode.

With a female cast there is still uniqueness to the character selection as there is a character for many different play types. The two partner additions are a treat as each character assist in their own unique way with abilities. Sort of how in Marvel vs Capcom series but you are not able to interchange with them to fight. While assist partners are called into action by L1 or L2 for the second, they can also obtain damaged or killed. I thought this was a very balanced addition to the gameplay. 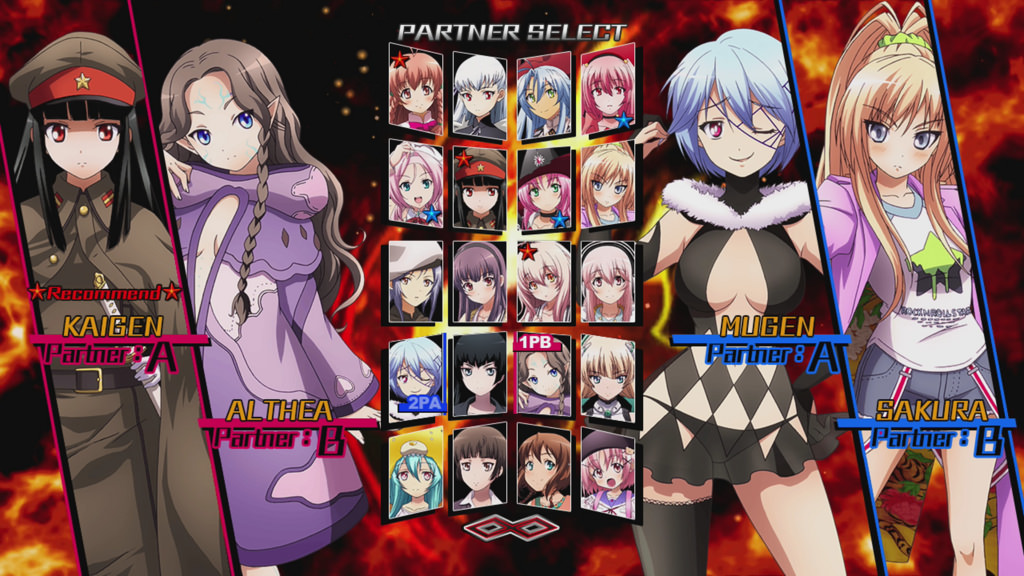 For online play it was easy to make a lobby or jump in one. The invite system is easy to navigate and the online code is on par for battle. You’re also able to see a player’s connection ping in case you want to avoid playing with.

Cons:
– Story mode felt tacked on with no creativity
– Story was incomprehensible
– Felt like a job to get through the dialog
– Lacks content

Aside with a few lackluster factors when it comes to the potential of how story mode could have been the, it picks up once the fighting is commenced. The bread and butter when it comes to excitement for NitroPlus Blasterz is the fun you gain just by playing with a character and getting to learn their move sets.

Review Copy and Assets were provided by XSeed Games.