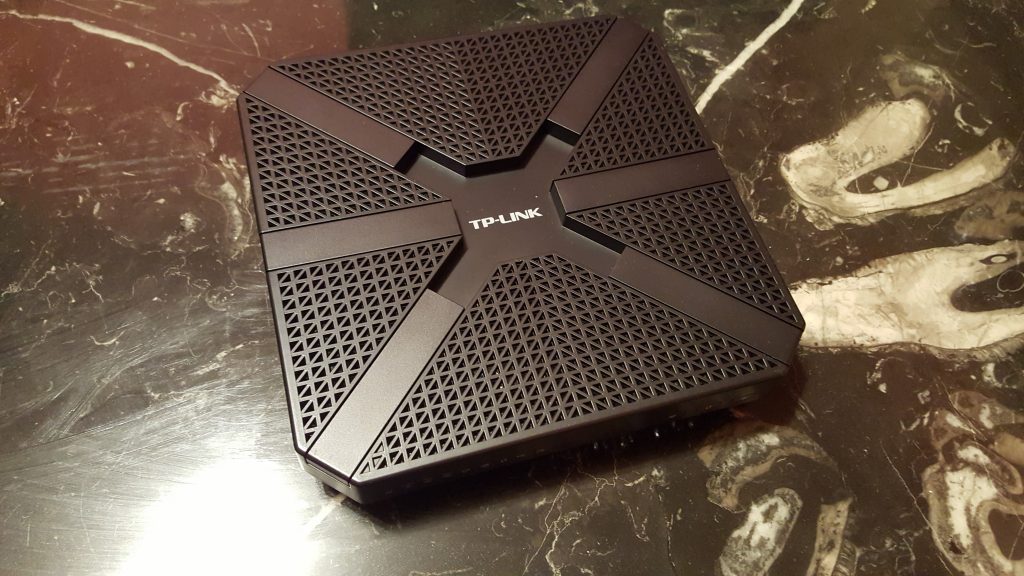 Since the last time I covered a router the market has seen its fast increase of Tri Band routers hit the scene. This is happening because the need for bandwidth has increased as well as the devices being used alongside it. It’s funny as most homes are using Dual Band routers but if you have a great amount of internet speed and a decent amount of folks and/or devices in your home you should be in the market for a Tri Band router. TP-Link has released its first tri band router coded named the Archer C3200. It is supposed to bring fast data transfers, an easy interface and simplicity. Does it hold the right cards to help with your data flow? 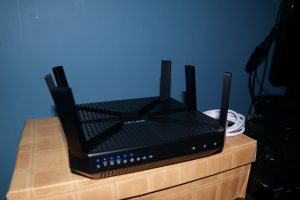 One thing I noticed with these Tri-Band routers is they are all going for an out the box look. the Archer C3200 is slightly different in this aspect and it pretty flat and box-shaped. It’s six antennas are well secluded but are easily noticeable once extracted. On the front to the far left you get various notification lights for the different WiFi signals, internet connection, and USB connections. To the right is buttons for Wireless, LED, and Reset. Flip over to the back side and you get access to the usual 4 Ethernet ports, USB 2.0/3.0 buttons, Power Button, and if things get crazy a spot to push a pin on a reset button.

Overall the design isn’t too crazy but I can see it taking up some space so make some room. Good thing about the older routers is they didn’t have these antennas that stand out and most are were able to be placed right side up.

Getting the Archer C3200 up and running realistically took me about five minutes total. I plugged my ethernet cables in, powered it on and the notification lights were blinking and went steady as indicated in the book. I checked my wireless connections and there was the TP Link connections. Just make sure you get the wireless password off the bottom of the router so you can login. Once that’s done you can navigate to their tplinkwifi page and make your own configurations and changes as needed. I have to say this is going smoother than expected.

I pretty much have a couple wireless routers in my household and it’s not because they are weak it’s just the structure and walls that are in my apartment. So I tend to keep a router in the bedroom and another in the living room. I’m using the Archer C3200 to replace an older Netgear N900 I had been using. From a wireless perspective I’m getting close to 99 Mb/s down and near 25+ up speeds on the 5Ghz side which is pretty good considering I was getting half that before. So far speeds have been consistent thus far and haven’t experienced any drops or lag thus far. 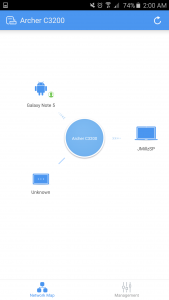 If you want to make changes to your router but not near a PC, you can try out TP-Link’s app called Tether. I thought searching this name alone was going to bring up hundreds of results but surprisingly it was #2 in the listed results I received. Testing it on the Samsung Galaxy Note 5, all you have to do is make sure you are logged into your WiFi connection and it sync up. Then use your router login credentials and you have pretty much decent access to things such as changing wireless passwords, blocking devices, parental controls and rebooting the router. Good to have when you need to get to it asap and not fiddle around on your laptop. Also back on the web interface there is an option to turn on “Smart Connect”, which basically allows you to have one SSID or connection rather than 3(the 2Ghz, and two 5Ghz) and combines into one. The router will recognize the device and give it the best suited connection.

The AC3200 Archer Tri Band Router by TP-Link has simplicity in mind for its consumers and pretty easy to use. Setup doesn’t take long and you have options to access your router via the web and/or the android/iOS app if easier. Speeds are pretty steady on this device and held up with the extreme downloads I put towards it. Options such as Smart Connect are interesting but weird to see usual features like Channel options omitted. Pricing was originally high pushing towards $300, but it has since dropped and you can grab one for about $250 if you search around.