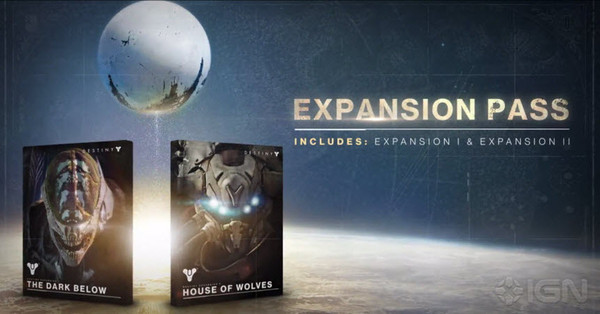 Video game makers are robbing us. That’s right I said it. They’re robbing us. I’m not sure what the motivation is, but based on how much we end up paying for our games I can only deduce that it’s good ol’ fashioned greed. Why are we paying an exorbitant amount of money for a game, only for it to be incomplete? Why does the company that makes the game get to charge us additionally for the rest of the game or as they word it “additional bonus content”. It’s all BS! It really is. This is my rant…walk with me.

I remember growing up and having game consoles and the excitement that I would I have when new games would come out. When I finally got the game the best part of playing the game was trying to beat it. Every aspect of it, the bonus levels, bosses, whatever (All of which were included). When I was done with a game it was completely done and I never felt as if I missed out on anything. Even in the games I didn’t beat I always felt satisfied. That was gaming in the late 80’s and 90’s.

The new gaming culture is vastly different, especially on the business side. The games today are much improved because the technology is much improved. It’s really impressive what video game developers, designers and manufacturers are able to get out of their think tanks when they put a game together. For that I applaud them but the games that they make is not the problem. It’s the cost that the consumer ultimately pays to play that game in its entirety that’s the problem.

I understand that times change and economics change. I get that. I’m not so old school that I believe that the video game business should always stay the same. I also understand that asking a customer to pay maybe a few bucks for a add-on to a game such as a new character in a fighting game or some more maps for a multiplayer game is not a big deal but not $20 or $30. This is what’s happening. Video game companies are making games that are essentially incomplete. Yeah, you can beat the game if you want to but to really get the total experience you have to pay for it…..again and again. It’s like going to a movie theatre and buying a ticket for the first hour and then having to pay an extra fee for every 10 minutes of the movie you want to watch after that. WTH?

What the problem actually is 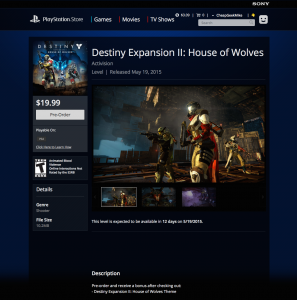 Take Mortal Kombat X . I went out and bought the game right away. HYPED. I love MK but when I got to the cash register to pay for it this is what I heard. “Would you like to buy the Kombat Pack for MKX for $29.99?” first it was the eye roll and then my thought was “Really?, $30 bucks on top of the $65 I just paid?” that’s $100 basically, for some extra characters and some more content that should have been in the game in the first place? No thanks. Keep it.

I couldn’t help but feel like crap. I felt like I had the “basic” version of the game. I’m not singling out MKX but it’s just the latest example of it. Destiny is another game with the same problem. I bought the game at $65 and then I waited almost three months and paid $20 for lackluster DLC with The Dark Below. All it really did was alienate an entire community of gamers who either couldn’t afford the $20 or just didn’t pay it. I waited another couple of months (almost 6 months) and on May 19th they’ll be asking for their players to do it again at $20. Or $17.50 twice if you bought the expansion pack at $35. If you do the math that’s about $100 to play Destiny. Why not just skip the BS and charge us $100 from the beginning then let us know when our DLC will be available for download. I can respect that. Not this. 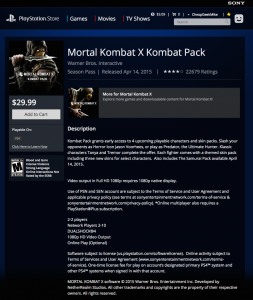 Playing games this way creates elitism within the gaming community. It separates the people who can afford the DLC from those who can’t. The real problem lies in the game almost doesn’t play the same without the DLC so you’re losing. Gaming is an expensive hobby as it is. Why make it more expensive? I’m sure some spokesman from anyone one of these gaming companies will have an elaborate bureaucratic reason that validates why DLC is priced at what it is but gamers aren’t dumb. We’re the nerds remember? We’re pretty smart. We know it’s BS no matter what you tell us but we’re almost forced into it because we really want to play your game. GTA V got it so right. Great online community, it’s an inclusive game and the best part? DLC is totally free. At the very least if they tried to sell us something later on. It wouldn’t be so bad because we got something for nothing initially. Buying DLC should be about making a deal or two. Not forcing us to buy something.

It’s not just consoles that suffer from this and it’s not just Destiny and MKX. Like I said, those were just my examples because I play them so often and they’re probably my favorite games. Mobile games more so than console games abuse the concept of paid DLC more than any other platform. There are a multitude of games that have or need “add-on” paid content included to enhance or give you the “full” game experience. To remind myself and to be fair, there are BY FAR way more quality free games and standalone full paid games then there are games with paid DLC. My issue is with games like Mini Death Star, Candy Crush, SimCity Buildit which are really great and fun games but they need money to really get everything you want out of the it. When and why did it get like this?

Here’s what I think of all this. I’m still going to be a gamer. I love it, it’s part of who I am and the reason I do what I do. That doesn’t mean however that because I’m a gamer that I should just accept what video game companies charge me for their content or what they charge me for the content that they exclude. If you can have add-on content for sale at the release of the game then why not just add it to the game charge us $100 bucks and get it over with? We gamers need to complain and if we must boycott then we must. We ALL understand what making the games we like cost but if you sell the game at $65 bucks and millions of people buy it then you will surely make your money. DLC should be free or at least at a minimal cost. To ask us to pay 1/4 of the cost of the game in DLC is a little crazy and not everyone can afford that especially when you consider just how many games that gamers are bombarded with. I’m not bashing video game makers, not at all. I’m just venting a frustration that I hear from my gaming family about the cost of gaming now. For the most part, you guys are great and if not for what you behind the scenes we can’t play great games. Just give us all the game and make it affordable.