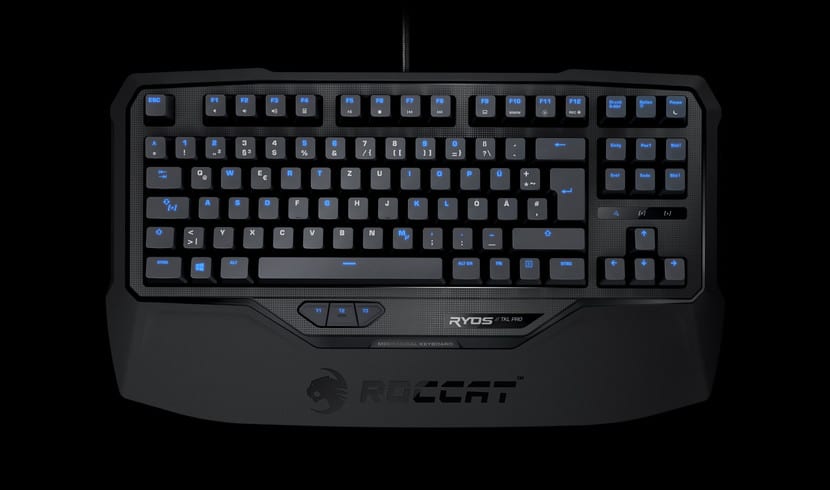 I’ve said this in the past, but if you’re an avid PC Gamer and you’ve spent tons of money building the most powerful gaming rid in the world, all that power means nothing if you don’t have a solid PC gaming keyboard and mouse to back it up. That’s like driving a sports car on cheap economy tires. You’re never going to get the most out of your setup. Nothing beats a good gaming keyboard and mouse when you are trying to be the best, especially if those both are programmable allowing you to customize the best layout for whatever game you’re playing. For me, I’ve been a fan of Roccat gear for a few years now and decided to finally check out one of their mechanical keyboards. Roccat was kind enough to send over their new Roccat Ryos TKL Pro keyboard for me to check out which nicely compliments the Roccat Kone XTD I’m currently using.

The Roccat Ryos TKL Pro Gaming Keyboard has that distinctive Roccat look with its all angular body and stealthy black looks. It looks very much like the previous Roccat keyboard I took a look at previously, the Isku FX, except that this one is a tenkeyless keyboard layout. That means it does not have the numeric keypad. It’s also missing the multimedia controls and the M-keys found on the Isku FX. The Ryos TKL Pro is a lot more compact however and doesn’t take up as much space on your desktop like other keyboards might.

Now, I’m not sure if all mechanical keyboards are like this or not, but the Roccat Ryos TKL Pro is heavy. This is the heaviest keyboard I’ve ever used but the weight gives this thing such a solid feel that I’m willing to overlook that. When you put the keyboard down on the table, it stays put and doesn’t slip and slide around like some of the lighter keyboards. It probably also helps that there is a generous amount of rubber underneath for grip. Everything  about the keyboard is solid. The build quality is excellent, the keys feel great with just the right amount of tactile feedback, and it just overall looks so bad ass, especially when paired up with other Roccat devices. 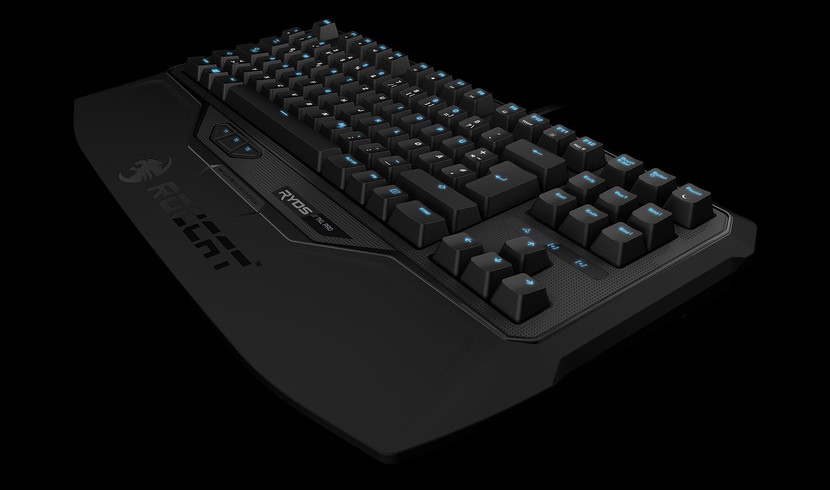 Of course one of the coolest things I love about gaming keyboards is the backlighting on the keys. The Ryos TKL Pro glows a bright, cool blue. It’s doesn’t have the color options that the Isku FX has, but I’m okay with that as it was more of a cosmetic thing than a functional thing.

Overall, the Roccat Ryos TKL Pro is just really cool looking. The matte black finish gives it a silky stealth look while the part between the keys has a smudge-proof finish. This is just a really slick looking kit that looks great with any gaming setup you might have.

The Roccat Ryos TKL Pro pretty much functions like any other keyboard should on its own. The keys are solid with great feedback and are relatively quite when in use. As good as the hardware is though, the real star and reason why this keyboard is great is the software you install with it. The Roccat driver suite that you need to install is the brains behind everything and without it, the Ryos TKL Pro is just another keyboard.

Like Roccat’s other driver suites, this one for the Ryos TKL Pro allows you to customize a wide variety of settings and features. Mainly you use the software to assign pretty much almost any action you want to any key. Those who are unfamiliar with Roccat’s software might be a bit overwhelmed at first when looking at all the options. It’s a lot to take in. 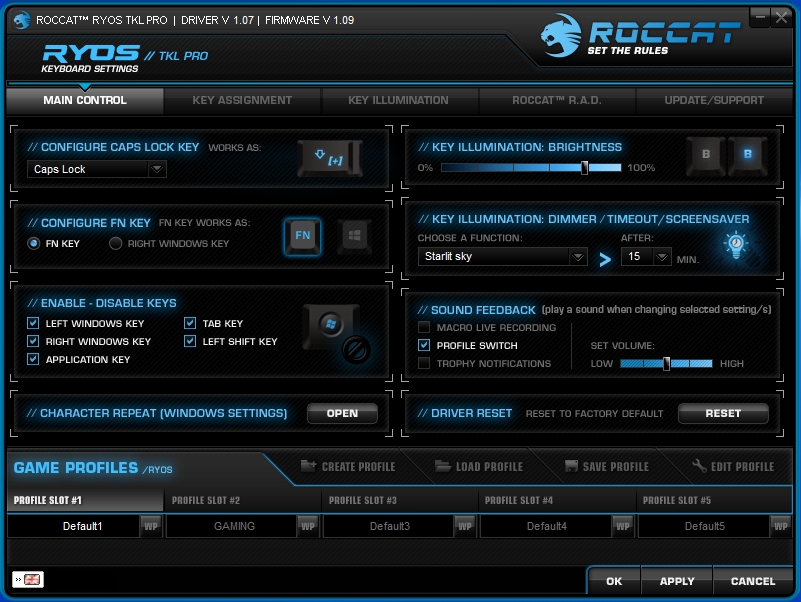 For those casual gamers, you may want to stick with just using the Main Control tab in the software. This section allows you to adjust basic features like what the function of the caps lock and FN key does as well as which of the main keys you can disable or enable. Here is where you can also set the intensity of the key illumination as well as when the keys will dim when not in use. 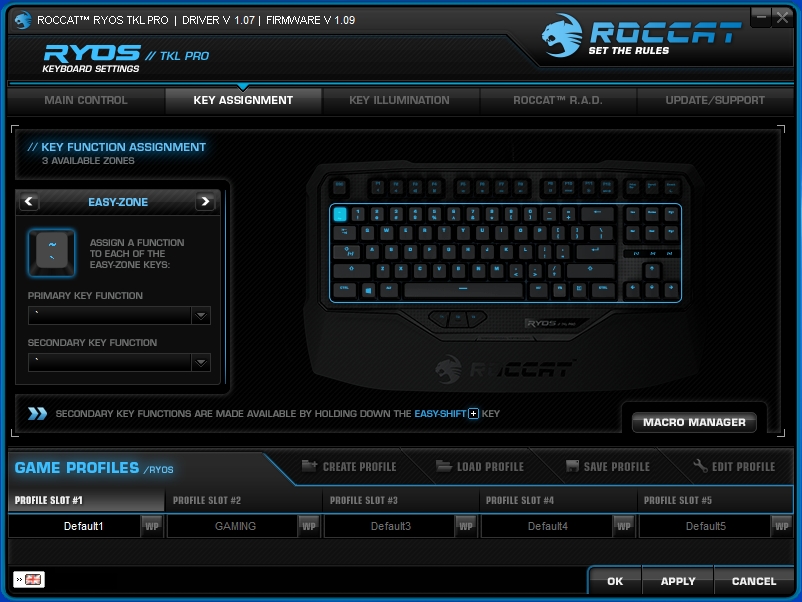 The Key Assignment tab is really the meat and potatoes of the Roccat software. Here is where all the advanced features are. From this tab, you can assign the secondary function of every key on the keyboard. This might not be all that helpful when just using regular apps but with games, you can assign keys to do anything you want. Mainly you can assign these keys to run powerful preloaded macros or custom macros you create. Macros of course are just complicated set of commands assigned to 1 key so that you only have to use the one key to run them instead of inputting those commands each time. The secondary commands can be activated if you set the Easy-Shift to function properly. 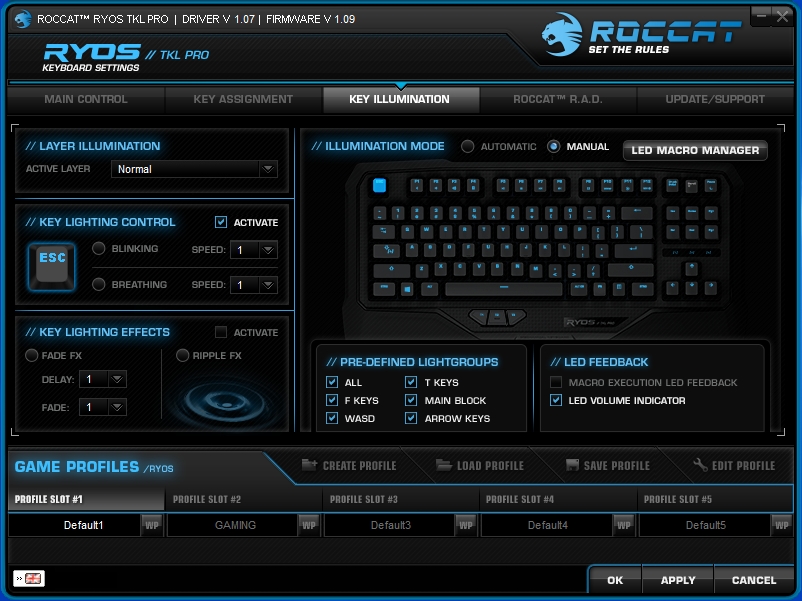 Lastly, the Key Illumination tab adds another layer of customization in which you can set only certain keys to light up when need be. That means that if you’re playing a game that only requires certain keys, then you can have only those keys light up. That makes spotting the essential keys so much easier and faster.

The Roccat Ryos TKL Pro is a fantastic keyboard for gaming. I’m pretty sure this keyboard can do everything a gamer needs a keyboard to do such recording custom macros,  assign specific keys for macros, and highlighting game specific keys. Also being a mechanical keyboard, there is definitely a lot more tactile response from it. The keys are quite loud when compared to other keyboards, but that gives you the auditory confirmation that you did indeed push down on the key.

The only downside to the tenkeyless keyboard layout is that those who heavily use programs like Excel will not like the fact that there is no numeric pad. It took me a while to get used to the layout without the number pad. However, there is a solution for those who may still want to use it. Just download Roccat’s Power-Grid software and you can easily add the numeric pad to your smartphone. It’s something you can use if you really need it, but I’ve learned to live without it. 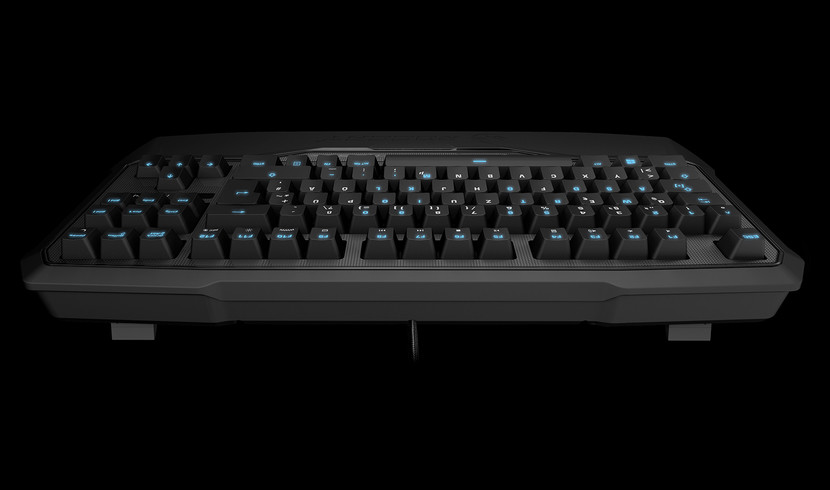