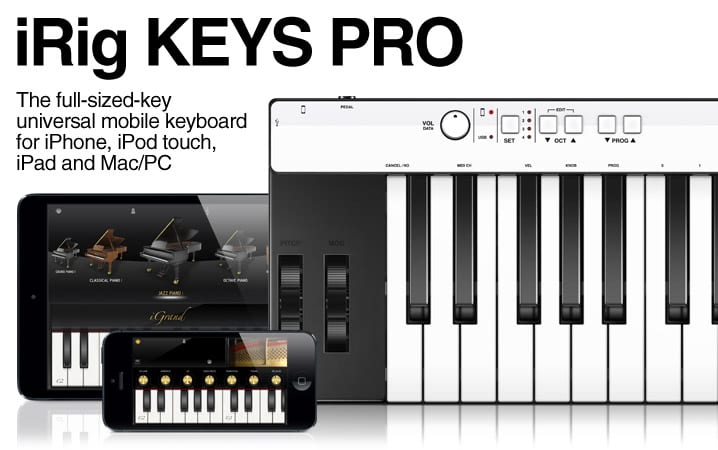 Even though the iRig Keys Pro is slightly larger than the iRig Keys, it is still a light piece of equipment. Just think about this for a second, it’s at least 30% smaller than the average MIDI controller. The basic black and white looks like it’s paying homage to the piano. I’m not going to lie but it also reminds me of my Brooklyn Nets. In my Santagold voice “Brook-lyn We Go Hard.” You know that basic all day everyday grind and you’re about your business look. It still pulls off a cool sleek look and feel with 37 full-size keys.

The iRig Keys Pro like the iRig Keys is compatible with iPhone, iPad, iPad Touch and Mac/PC. This MIDI controller is great for live or studio play. This almost weightless device velocity-sensitive 3 full octave plus on note full-size keys has 4 Set banks. You can Program Change messages, assign Control Change numbers to Volume/Data knob, transpose the keyboard in semi-tones and even in Edit mode, the user can set the MIDI transmit channel. The USB cable included is for direct connection to Mac or PC.

And yes it has goodies. Download the free version of SampleTank 2 L and iGrand Piano that are both high-quality sound. IK can boast about its enormous tools for musicians for complete music production and collection of sound libraries. If you’re trying to conserve the battery life on your device be it the iPad, iPod Touch, Mac/PC or iPod. Most definitely use the auxiliary mini-USB port to provide it with power during performances. As always IK Multimedia makes its controllers compatible with almost any DAWs such as AppleGarageBand, Logic Pro and plug-ins with it’s very own like SampleMoog, Sample Tron, Miroslav Philharmonik and Sonik Synth. And if you’re like Paul Rudd in “I Love You, Man” and enjoy “Slappin’ da B-ass” the AmpliTube app is perfect for you.

IK Multimedia and the iRig Keys Pro doesn’t disappoint. This is a perfect lightweight on the go MIDI controller so you can perform or create anywhere. Just throw it in the backpack along with an iPad, iPod Touch or iPhone and leave the Mac at home. The 37-keys are real feel deal type of ivories that compliments your fingers when you play. This is great for that beginning or seasoned producer or performer with the added plus that it won’t burn a hole in your pocket at $149.99. So instead of asking your mom, “More Park Sausage’s mom, please!” Ask for the iRig Keys Pro, ya know?