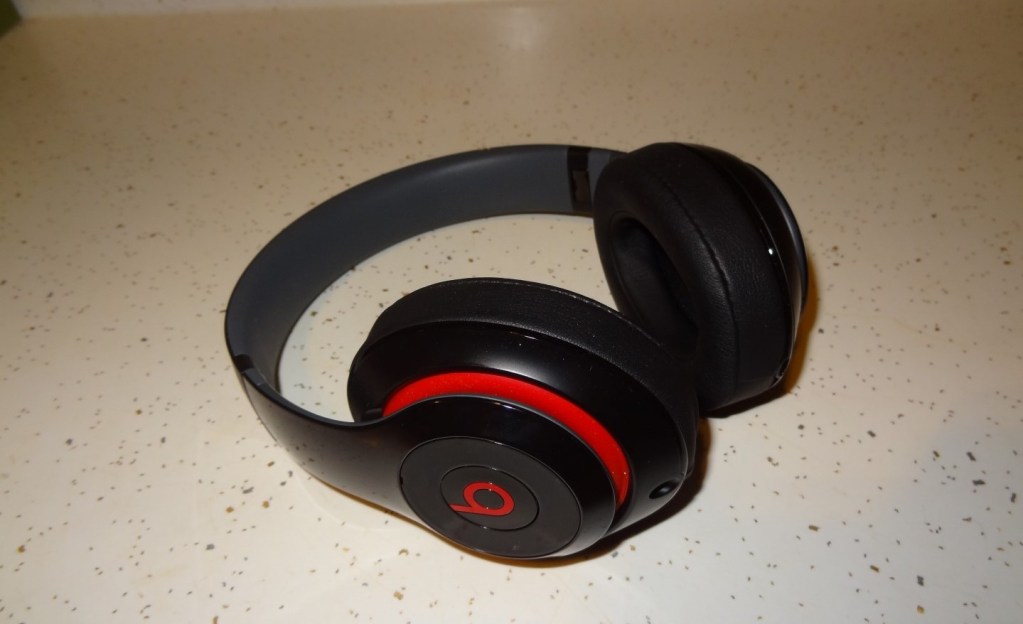 Beats has gone through a product revision over the past few months with two models which is their ever so popular Studios and also Wireless Studios. If you looked at older models they would have the Monster emblem on them showing that at one point these two companies were under the same roof. Time has passed and Beats is trying to make you forget that time period over happened. A couple of months ago we reviewed the New Studios which received some positive reactions from us. Now just how well do the New Wireless Studios hold up? Lets cut the cord and find out. 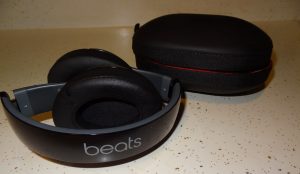 The bulk that consumed the original wireless headphones has been tone down a good deal and that’s a good thing. I wasn’t a fan of the older models as they looked and felt heavy in my opinion. The design on the Beats Wireless is still made of plastic and this review model is mostly black with accents of red. Placing the New Wireless Studios on my ear I was pleasantly surprised how comfortable they felt and didn’t feel overwhelming. The ear cups are real plush and feel great on my head. I have worn them for long periods and haven’t felt any discomfort which is a plus. The earcups actually remind me of the last pair of Beats I reviewed which were the Executives. I still think those have some of the best build quality of any Beats headphones past or present. Also I take my time folding them up, they just have a feel as if you need to be delicate with them. 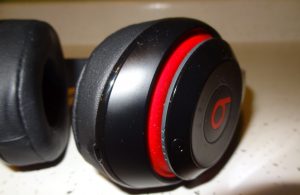 besides syncing. On the left ear you have a volume toggle that blends in and allows you to go up or down. If you press the Beats button once you can pause, two times will skip to the next track and three will go back a track which is identical to the feature on the SOL Republic Tracks AIR I reviewed couple months back. It has been sufficient and worked with ease every time I did it, but the buttons themselves just feel cheap with that plastic build and feel like they are prone to breaking down or getting stuck over time(happened couple times). On the right ear is the power button and has a battery indicator letting you know how long before you charge it. Further down on the cup is a microUSB port for charging. They don’t seem to take long to charge which is good, but make you turn them off when done. If you forgot to turn them off good luck with your battery life as they don’t seem to have an auto off feature after non use. I know we should be more careful but sometimes you forget.

I love a pair of headphones I can use for cell phone calls, like who wants to hold a phone to their ear anymore right? Calls have been crystal clear and parties heard me clearly and I was able to hear them fine. Also distance with bluetooth ranges at over 30 feet as advertised. I have walked away from my desk at work, left my phone, went to the cafeteria and came back and didn’t skip a beat.

Now the big question is has the new sounding Studios Wireless gotten any better? Giving it a run through in various genres of music it has done so greatly. ANC(Adaptive Noise Cancellation) has lent a great hand in blocking outside noise and not being overwhelming with sound blaring in ears. The fact they are over the ear does allow an experience of being immersed more with the music. I have tested them walking the streets of New York City all the way down to the usual crowded subways. We know Beats emphases heavy on Bass and can hear its magic being worked in tracks like French Montana’s “I’m a Coke Boy” or “Stay Scheming” with Rick Ross and company. I haven’t experienced distortion at higher levels which is a plus. I do notice when there isn’t any music playing you can hear like a dead air or ghost sound. Not really a bit deal but worth mentioning.

I think Beats By Dre has done a superb job of rebuilding the Beats Studio (Wireless) headphones models. Even though they shaved off alot of the plastic and they look and feel better, they just don’t feel like $380 headphones. They are very comfortable headphones and feel great on the ear and help block out noise all around you. Going back to pricing, could be a bit costly for some, especially with other models such as the SOL REPUBLIC Tracks AIR at $200, or even the JBL Synchros S400s at $229.99. If anything give them a listen and see if Beats has got Better.

Now if they can just revise those Beats Solos everyone loves so much to look and sound more like the New Studios, I might be a happy camper.

Beats By Dre are available for $379.99 at various retailers including Beats By Dre.