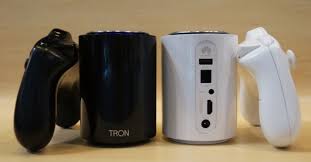 Apparently, the world can never have enough Android Video Game systems. With dedicated consoles like the OUYA, MOJO, or Nvidia SHIELD, the Android platform continues to catch up to the number of games offered on iOS and will likely surpass it in exclusives and or overall titles. And now, a new challenger approaches with Huawei’s Tron Android video game console. Foregoing the Google Play Store for it’s own digital store, as is a trend with Android consoles, the Tron does pack some decent firepower under the hood. Powered by a Tegra 4 processor bolstered by 2GB of RAM and offered with the option of 16 or 32GB of storage space. 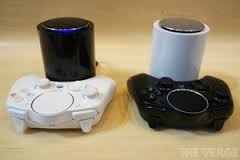 Unlike the OUYA which is a small cube like shape, the Tron is a cylinder? At least there is no lack of options when it comes to aesthetics as far as Android gaming consoles go. Speaking of which, the console also comes in a choice of black or white and the controller is something like the illegitimate love child of a Xbox One and PlayStation 4 controller. With the body of the former, a circular touch pad for touch screen only games is present on the front like the PS4 controller.

If this has caught your eye however, you might have to wait a bit if you live in the states. So far only a China release has been confirmed with the possibility of a US launch remaining to be seen. While there are several Android consoles on the market now, it is always good to have options, after all, isn’t that the very point of the Android platform? I ain’t mad at you Huawei.