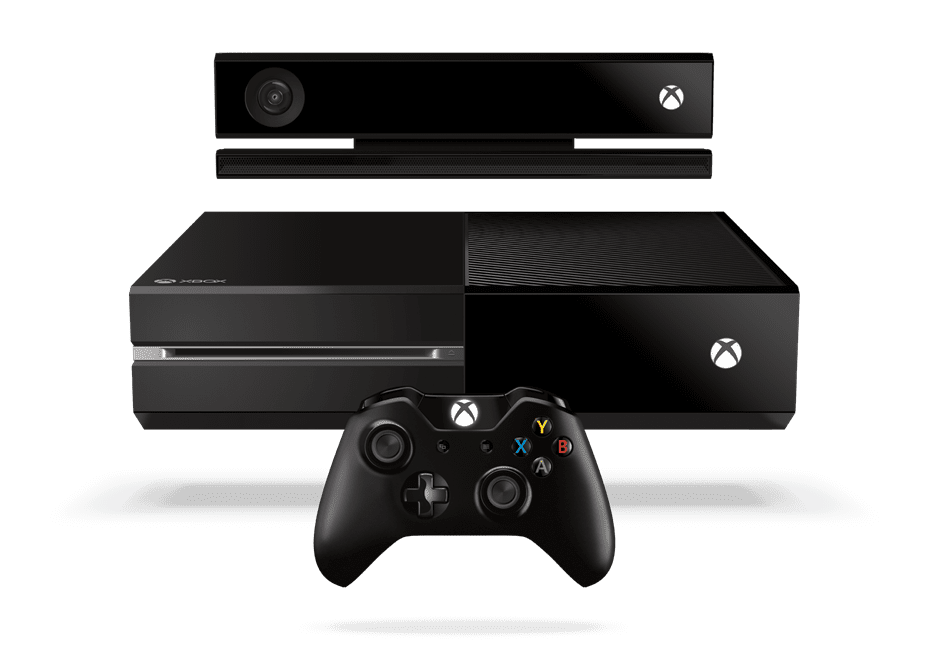 On November 15th Sony brought to the table it’s next-gen PS4 console and it’s been met with praise and success. Now exactly a week later Microsoft releases it next-gen console, the Xbox ONE. Does it match up to it’s hype? Will it able to compete with Sony and it’s powerful PS4? The answer is a resounding YES. If you were one of the million or so people who coughed up $499 to buy an Xbox Day One machine you couldn’t help but wonder if you made the right choice considering the PS4 was $100 cheaper. You would ask yourself some questions, but the main question would be “What do I get for that extra $100?” My answer is an experience like no other. It’s a media hub and all in one entertainment machine. Let me explain from start to finish based on my experience 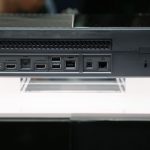 The Xbox One when I unboxed it is not necessarily pleasing to the eye as far the design goes. It’s big, heavy, black and it kind of resembles an old VCR. Clearly Microsoft thought that this box style design was their best option. The back of the Xbox has all of the standard ports that you’d expect, 2 HDMI ports, ethernet, etc. It also has a rather large power brick typical of an Xbox. I thought with a console of its size that the power supply would be mounted internally similar to the PS4 but Microsoft figured that larger cooling fans would be better. That aside I proceeded to go through the cable connection setup, the online setup, Xbox live re-integration and Kinect setup (all which took forever) and right after that I was taken to my dashboard. 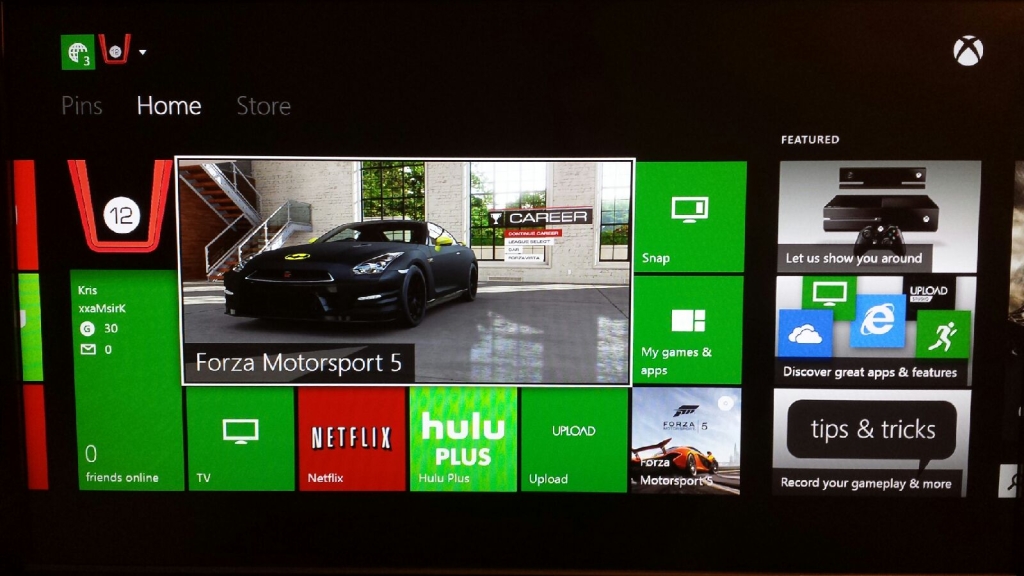 The dashboard hasn’t changed much since the last update on the Xbox 360, at least cosmetically. It still utilizes the Windows 8 inspired metro interface, with active tiles and that colorful boxy minimalistic look. The integration of the Kinect makes the interaction with the dashboard much more fun with the voice commands. To power on the Xbox all you have to say is “Xbox On” and it’ll begin do whatever you ask of it (when it works, I had to do it a few times). All of the commands for the most part start with “Xbox” and the more you play with the commands the more fun it is to watch it work.  Occasionally I did have some issues with the Xbox not being able to hear my commands and at times not being able to respond to them. I also got frustrated sometimes and found that the Xbox would freeze up and I’d have to start my commands over or eventually just use the controller to get what I wanted done.

A quiet room is optimal if you really want to take advantage of the voice commands. Getting the Xbox One’s voice commands to work with a bunch of your friends over and talking at the same time won’t work well, if at all since at this moment the Xbox One doesn’t allow for singular voice recognition. By yourself in a room or with one other person is the best way for now. The Xbox One also allows you to use hand based gestures as well to perform actions similar to what you could to with the 360. The actions you can perform are limited though and I found them to be more annoying than anything else to use. I personally won’t be using them but of course you can if you choose to use hand gestures and voice together. Despite these minor issues I can still say using the voice commands was a bit addicting and fun. 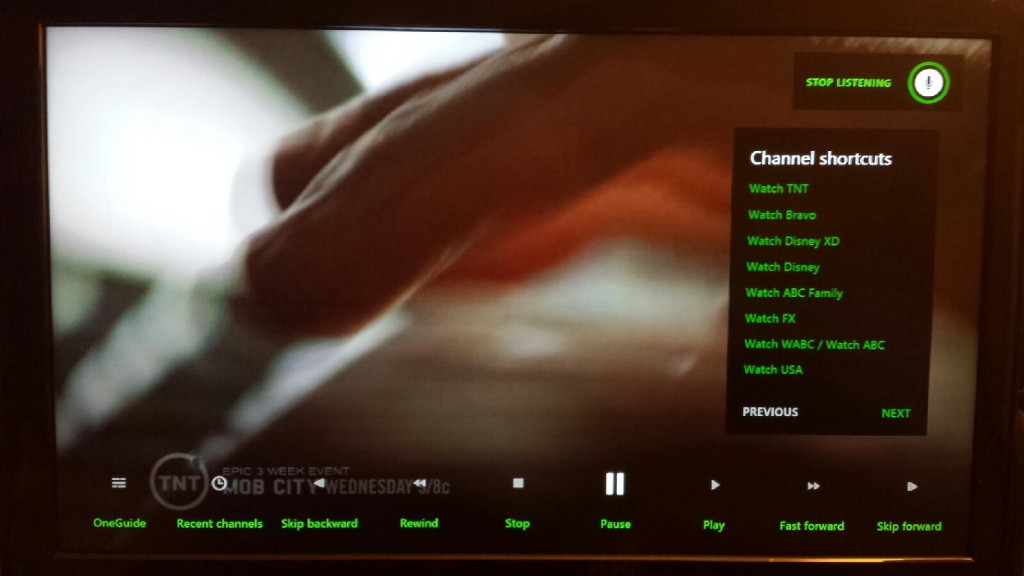 Microsoft’s ultimate goal with the Xbox One is to replace your Blu-Ray player, cable box and internet browser. Microsoft is attempting to make the Xbox One a one-stop shop for all that pertains to your entertainment needs. You can still download apps as you could before if you’re thinking Netflix, Hulu, Crackle, etc. The difference this time around is you can incorporate your cable box into the equation. You can connect your cable box directly to the Xbox One and watch your cable service through the Xbox One’s dashboard. It’s a nice feature and a valiant attempt to fuse gaming and your cable service together to create a total media experience. I experimented with this and for the most part I did have some fun. Changing channels, going back and forth in between apps worked pretty good. You can do all this just by saying “Snap” plus the app you wish to use and then you can go back and forth switching between TV and a game in progress. You can even resume your game at the exact point you left it prior to switching apps which I thought was very cool.  Again sometimes it was buggy but still enjoyable. 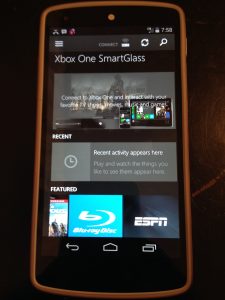 The Xbox Smartglass app for iOS and Android gets a refresh for the Xbox One. Like it’s predecessor it’s basically an extension of your Xbox One similar to the Smartglass app for the Xbox 360. It doesn’t differ much other than the fact you’ll be connecting to an Xbox One. You can still check your friends’ list, achievements, control the Xbox, stream content and all things that you could do previously.

The Xbox One as a gaming console boasts some power. I won’t bore you with specs but it comes packed with an 8 core AMD processor, 8gb of DDR3 RAM, and high-powered next-gen GPU all to make playing next-gen games a breeze and enjoyable. As with the PS4, the games are beautiful and elaborate. It has a solid lineup of titles (Ryse, DeadRising) that are a little better than that of the PS4 at this point, especially if  Forza 5 is your starting game. Worry not, most of the games that we’ll see will be cross-platform anyway and we’ll have to wait a little bit for the console exclusive titles to appear, so there isn’t too much comparison to make in terms of games right now. It’s really just a matter of preference and the experience you’re looking for.

As I said with the PS4 review, either choice you make in a console is not a bad choice unless of course you’ve got the bucks to have both. No matter which one you choose you’ll have a great experience playing next-gen games. I do believe however at this point the Xbox One offered the most fun. Microsoft has some work to do fixing the TV integration, Kinect voice recognition and sensitivity may need a patch job but this isn’t a foreign circumstance when dealing with a new technology of any kind. I do appreciate the fact that the Xbox One gives took big gambles to give us the best glimpse of what the future of entertainment may become and that’s the part that excites me most