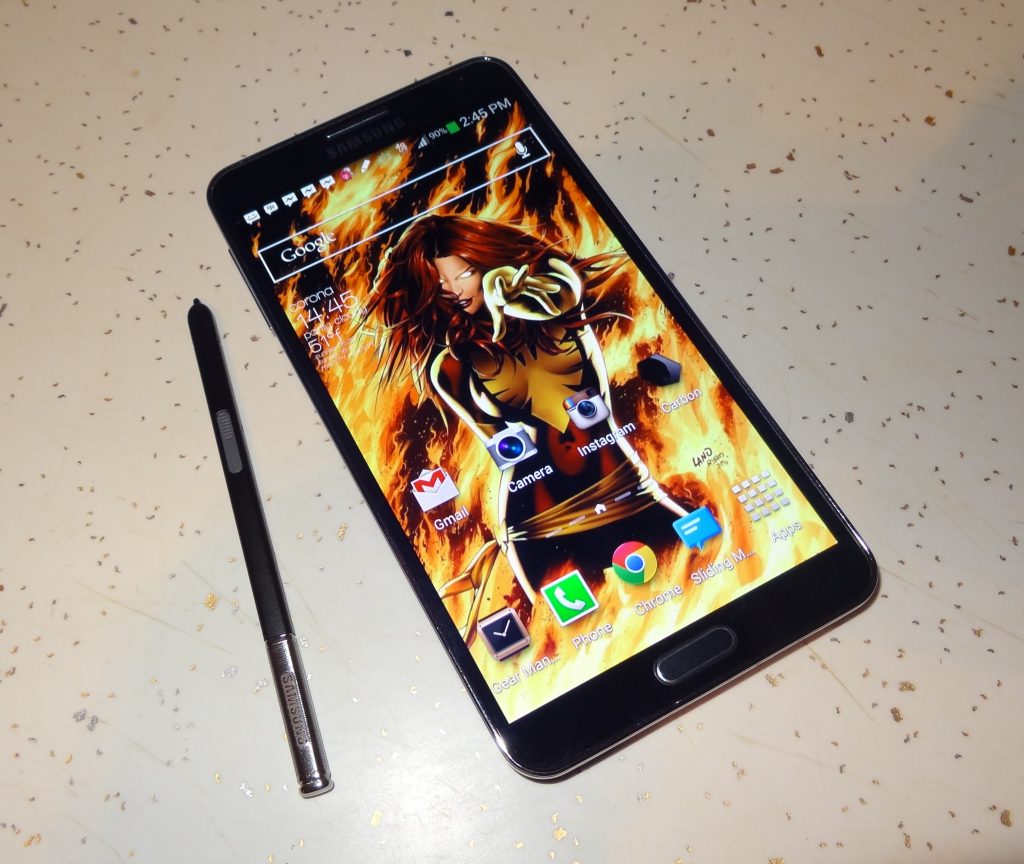 The Galaxy Note series is a product line that Samsung continues to make improvements to and try to woo people over with. Its appeal is more catered to a specific market then say the Galaxy S series, seeing that more consumers are likely to pick up a Samsung Galaxy S4 rather than a Samsung Galaxy Note 3 based on the sheer size alone. The S4 was a nice change from the S3 based on its difference in weight, going feature crazy and better resolution. Hardware changes were wished upon and we still got plastic unfortunately.

The Samsung Galaxy Note 3 when first announced had people skeptical about where they were going to take the device hardware and software wise. Me being a heavy user of the Samsung Galaxy Note 2 and even being my daily driver while there were newer and stronger devices out, I felt I had a personal stake in it. When it was revealed at the end of August, I was pleasantly surprised of what was changed, improved and what stayed the same. But was it enough to change to the Note 2’s successor?

When the Note 2 was released its specs were nice as it had a 720p display and even a quad core processor. While using it as time progressed I felt the need for higher specs and Samsung didn’t disappointed as they threw the kitchen sink into its latest creation. The Galaxy Note 3 has a 1080p Super AMOLED HD display that comes in at 386ppi bringing some of the cleanest viewing on an Android device today. They also managed to stretch the screen out from 5.5-inches to 5.7inches and even cut the weight down from to 168g(the Note 2 has 180g). The devices gives an impression of it being heavy but holding it in the hand it may be lighter than some of your other devices used. 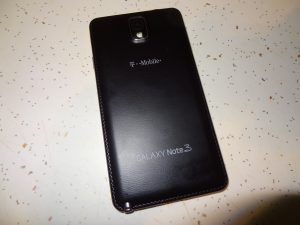 If you flip the Note 3 over you will notice they have done away with its polycarbonate plastic seen on its prior devices and now gone with a faux leather material. It gives the phone a premium look and feel to it and even provides a better grip in my opinion. I mean in the end it still plastic but a right step in the direction and that we can deal with.  Underneath that is a Snapdragon 800 Quad Core chip, 3 GB RAM, 3200mAh battery, improved graphics processor and now the default of storage memory is 32GB. These specs are everything I wanted and made me want to dig a grave for the Note 2 and wish it farewell.

If you read the review on the Samsung Galaxy S4 its carrying all of its precious TouchWiz features over and mixed with Android 4.3 Jelly Bean which was the latest software out. All its motion controls such as Air Gestures and Air View are still here but there are some improvements with the usage of the S-Pen now. The S-Pen has been greatly improved and is now symmetrical. Before you had to make sure it was facing a certain way but now it just slides in. In reality the S-Pen is what makes the Note series stand out from any device on the market today. When you pull out the S-Pen now it brings up a small widget called “Air Commands”. 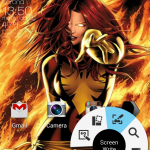 There are loads of features for it and just works. Screen Write is great for screen caps and then making edits to them, Action Memo works for say writing something down right on the spot and then going back to what you like to do. Pen Window doesn’t impress too much as you have to go into Air Command 1st, then click on it then draw a box. By then you could have just selected the app. Writing with the S-Pen now feels more like a actual pen then a stylus. Its more precise and accurate compared to prior versions.

Multi Window has been vastly improved where it works with more applications without rooting needed and some of the windows can correspond with each other. I can be in my Gallery and drag a picture into my text message without hesitation. But these work better with all the native apps compared to third party without support. My Magazine is simply Samsung’s venture with Flipboard continuing forward. It comes up when you press the Menu button or swipe up from the bottom of the screen. I don’t really use it and even wish to disable it altogether.

Battery life was one of my favorite features of the Note 2 and it carries on with the Note 3. I have gotten through long work hour days with the Note 3 without reaching for a charger but I feel even with that extra 100mAh of power compared to the Note 2 its on par. It’s possibly that the Note 3’s 1080p gorgeous screen is an energy sucker when the Note 2 had 720p. Processing wise this is one of the fastest and strongest phones on the market in line with the LG G2 which destroys everything in its path and then some. I did experience some issues with occasional freezes where it would just stop out the blue and then start working again. Most likely this is a TouchWiz issue and all the features surrounding it.

Utilizing T-Mobile’s 4G LTE services in New York City I have experienced crystal clear calls without any drops or breaking up. Also the speeds have been pretty decent in the big apple getting anywhere from 5-10Mbps whether it’s upload or download. I have seen the upload speeds to usually be higher though.

If you love taking pictures then you should have fun with the Note 3. While it retains most of the features of the S4 camera besides Night Mode now gone and replaced with Smart Stabilization. The Note 3 has so many camera applications you will be messing with it for hours on end. I wish there was more options to change the shortcuts on screen then rather going through the carousel of options each time. Also low light shots come out as muddy at times which you can check the shots and see. Another improvement with the camera is the video portion where it usually shoots 1080p but you can up the ante and set for 4K video. It looks great especially on the device but you wouldn’t be able to enjoy unless you see it on a 4K display. Also the 1min video I recorded below was about 355MB alone.

The Samsung Galaxy Note 3 is great for point and shooting and even recording as I usually have enjoyed video recording with the Note 3 and even S4 more than other android devices available. One feature I wish it has was OIS (Optical Image Stabilization) which is currently on the Nexus 5 and even the LG G2. It makes for some awesome clear picture taking. 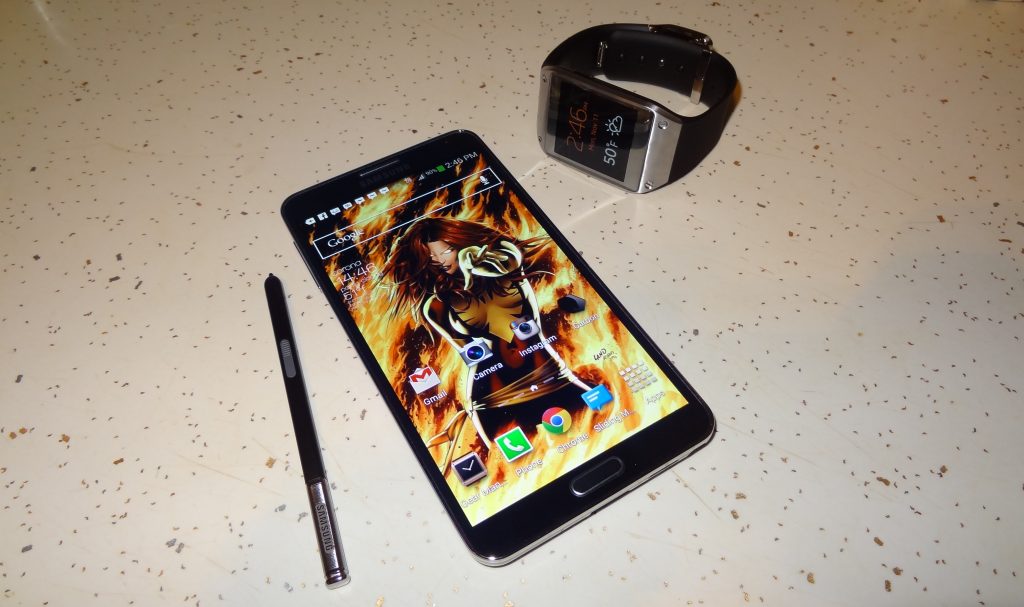 While the Galaxy Gear doesn’t come with the Samsung Galaxy Note 3 it may as well. It was built to work with Android 4.3 Samsung devices and the Note 3 is the only one to be released at the time with it. Samsung has stated they will be pushing older updates out for the Note 2, S4, and a couple of others to support it. As far as working with the Note 3, it’s pretty fluid. It syncs up via Bluetooth and doing a action on the Galaxy Gear translates to the Galaxy Note 3 instantly.

Whether I’m making a call, transferring a picture, viewing a message I can see the response from the Note 3 in a snap. It also works in reverse, if I’m making changes to the Gear via the Gear Manager application, the Gear will flash these changes at a flick of the screen. Getting them as a combo can be a drain on the wallet, and it’s a decent accessory just so costly at $299.99 on top of what you’re paying for the Note 3.

The Samsung Galaxy Note 3 is undoubtedly the best phone Samsung has ever created. From its massive specs to its laundry list of features (even though you may not use of them), it has something for everyone. While I’m still not a fan of TouchWiz it is getting better with age. The S-Pen is the Note’s claim to fame and is a great companion. The design while still not the best is a much needed improvement from Samsung’s prior devices. Is it worth jumping from Note 2 to Note 3? Without a shadow of the doubt the Samsung Galaxy Note 3 runs circles around just about every Android phone out besides the LG G2 which keeps up with it.

The Samsung Galaxy Note 3 is available for all carriers such as T-Mobile for $199.99 down and the other three major carriers Verizon, Sprint, and AT&T.