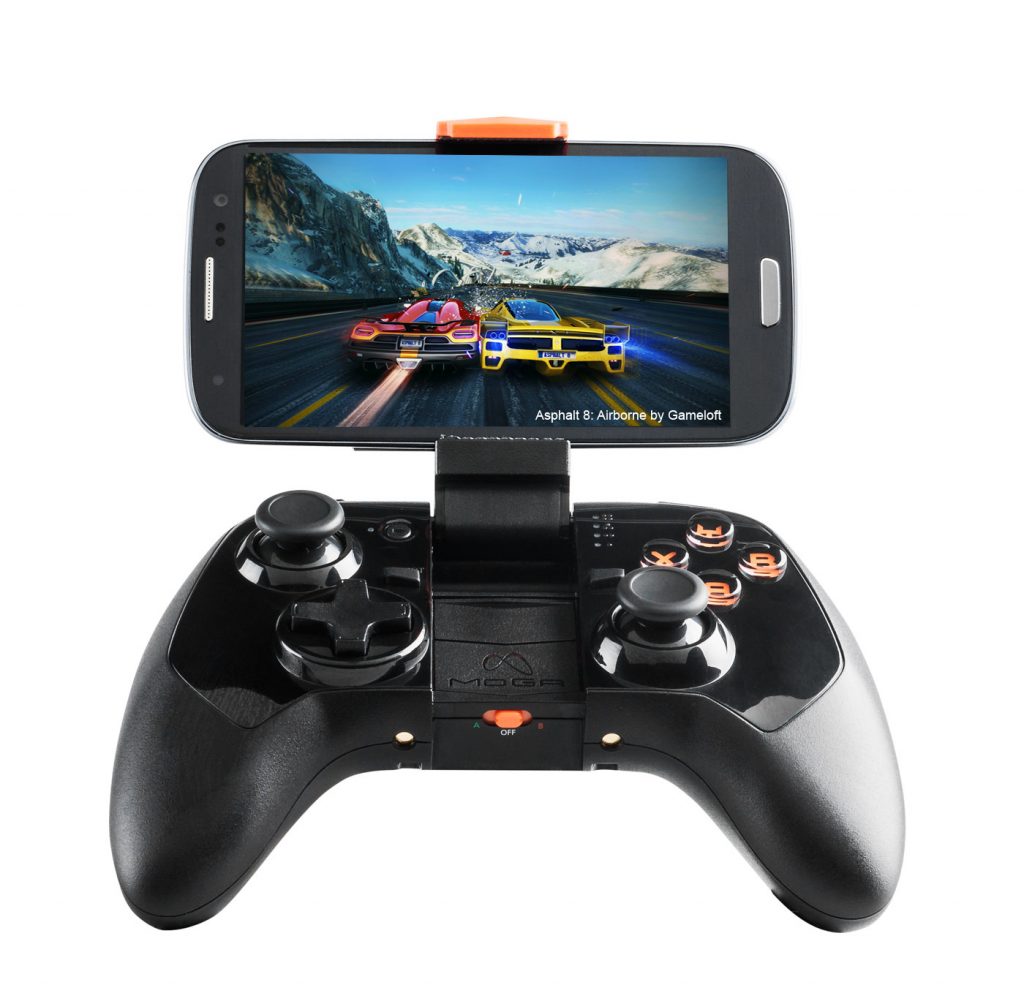 How many times have you played a game on your mobile phone and thought to yourself, “man, this game would be so much better if I were playing it with a real controller.” That happens often with me, especially when playing games like first person shooters or even racing games. Yes, touch screen controls can be decent, but on some games, they just aren’t that optimal and don’t give you that physical response you need to be competitive. You don’t get that feeling of control because every press you make on the touch screen feels exactly the same. Not only that, controlling a game on the touch screen limits your field of view as touch screen controls usually take up a good amount of the screen and so do your hands. One of the best options out there to make mobile gaming more fun and console like comes from MOGA, a leader in mobile gaming controllers.

I’ve been using their MOGA Pro controller for quite some time now and have been really happy with how well it works on the games it supports. It was the perfect controller to get if you wanted to get serious about Android gaming. It’s not anymore because MOGA just improved the MOGA Pro design tenfold with their brand new MOGA Pro Power, the latest in portable mobile gaming controllers. This controller is everything the original MOGA Pro was and much more. 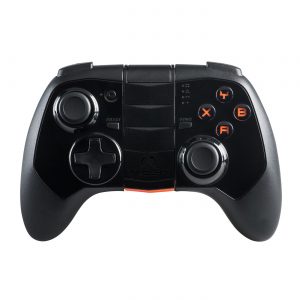 Like the original MOGA Pro controller, the new MOGA Pro Power is modeled slightly after the Xbox 360 controller, in terms of stick and button placement. There are dual clickable analog sticks, a directional pad, four action buttons, two shoulder buttons and two shoulder triggers. Most of the everything is similar to the original Pro except for the four action buttons which have larger fonts, bolder fonts in a brighter orange color. MOGA did away with the back-lit buttons on the Pro Power so they made the action buttons easier to see regardless of lighting.

The shape of the controller itself is also a bit different from the original Pro controller. The Pro Power feels a little bit wider and not as chunky as the original model. The controller itself also looks a bit nicer with an all gloss black face surrounded by a matte black body. Also, there are no more rubber palm grips on this model. The Power Pro does away with this for a cleaner look. The middle of the controller still features MOGA’s signature design element, the S.M.R.T Lock arm which will accommodate most sized Android devices. I’m trying this out with the largest smartphone I own, the Samsung Galaxy Note 3, and that fits just fine. There’s even room to spare for even larger devices. The arm does differ slightly from the old arm, but mainly aesthetically with new orange accents on the top. In fact, there are splashes of orange here and there just to accentuate the important areas of the controller. 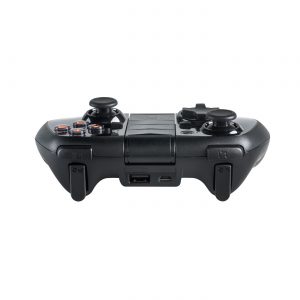 What makes the new MOGA Pro Power different from its predecessor is the fact that it has MOGA Boost technology and a built in, 2200mAh rechargeable battery for recharging your mobile gaming device on the go. That means you won’t have to worry about battery drain on your Android device. Just plug it into the USB port located on the rear of the controller and you’ll be able to play even longer. This is great for long trips.  The built in battery of course makes the MOGA Pro Power a bit heavier than the last MOGA Pro, but this is a good thing because the last controller in my opinion felt much to light and toy-ish. This one feels much more like a professional grade controller.

Of course the MOGA Pro Power include the hidden power switch for A and B modes. Which mode you choose is dependent on the game you are playing. Most of the time, it’ll be A, but there are a handful of games that use the B mode.

Even though the MOGA Pro Power is a Bluetooth compliant device, you can’t just pair it up and expect to use it. You need to first download the MOGA Pivot app from the Google Play Store and use that to setup your device. The app will allow you to set up both A and B modes and also acts as a central hub for all MOGA compatible games. Setup is a breeze with the app and it guides your through every simple step. 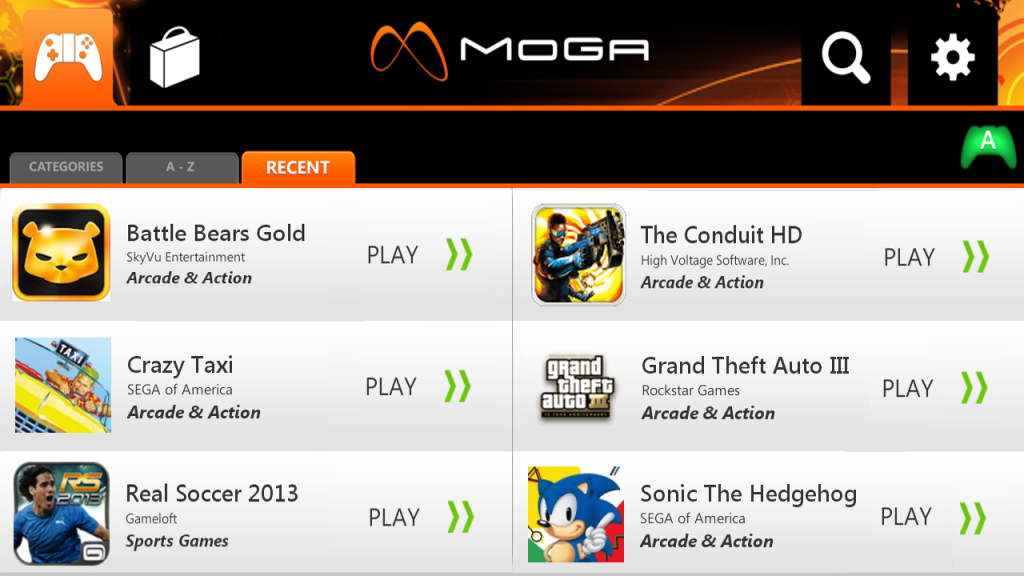 Once everything is setup, the app will let you know whether or not you already have MOGA compatible games installed on your device as well as which games you can download if you don’t. The games list basically shows you what is compatible but takes you to the Google Play store to download the games. Some are free while some are pay. For my tests, I chose some of the more recent games out right now just to test out responsiveness. 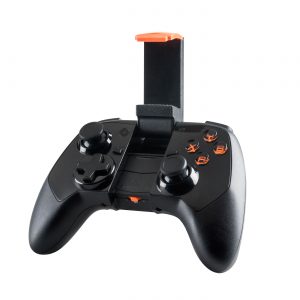 I started out with Dead Trigger 2, one of the hottest games out right now by MADFINGER Games. It is a first person shooter in which you basically go on survival missions while fending off hordes of zombie. I’ve played this with and without the controller and while it is playable without, it’s not very comfortable nor very accurate. With the MOGA Pro Power, you’re able to move more precisely with extra buttons on the controller that control certain features you can not really do on the touchscreen. Also, your hands don’t get as tired nor do your thumbs slide around while trying to move.

Which brings me to the real benefit of the MOGA Pro Power. Much more of the screen is used for being able to see and experience the game now instead of having portions of it covered by your hands.

If you find that your Android device is running low on power, just connect the included, short lengthed USB cable to attach one end to your device and one end to the controller. The shorted cable means it’s not in your way and you can continue playing without being interrupted by an unexpected shut down.

If you’re serious about mobile Android gaming, you’re going to want to get yourself a MOGA Pro Power, especially if you’re accustomed to full size gaming controllers thanks to console gaming. As an avid gamer, I know that it can be a little difficult going from a controller to touchscreen based gaming and it shouldn’t be. Mobile gaming should be as easy to get into as console gaming and the MOGA Pro Power allows you to make that transition.

The MOGA Pro Power is well made, much more hefty and sturdy than the previous one, and the added feature of a backup battery is a welcome new addition. You’re able to game for much longer periods of time and with a much more comfortable controller, you won’t mind doing that. There are already over 120+ games that support the controller with many more on the way.

The MOGA Pro Power is available for purchase now and costs $79.99. This is a bit more than the old MOGA Pro but you get the added benefit of the rechargeable battery pack for longer gaming times. The quality on this unit is also much better and well worth the asking price. You can pick up your own MOGA Pro Power here – POWER A MOGA Pro Power.