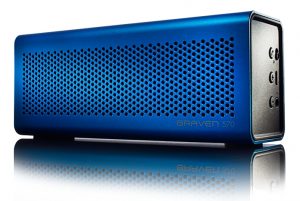 When it comes to Bluetooth speakers, there are certainly a ton of choices out there. The problem is, which one is right for you and which ones sound the best. Well, it’s not as cut and dry as that. You see, although one speaker might sound really good, it may lack the features you want or it could be a speaker with all the features you want, but sound really lousy. It’s one of those buying decisions that you should really research since there are so many out there. I’ve been lucky enough to try a few and even though they all have their pros and cons, the major pro of course is that they are all Bluetooth enabled which means any Bluetooth equipped device can connect to them and make use of them as a wireless speaker.

That brings me to the Braven 570. It’s the latest Bluetooth speaker I’m looking at right now that boasts superior sound with unparalleled style.

The Bravia 570 sticks to the familiar rectangular shape that we see with many portable Bluetooth speakers. The difference of course is with the aesthetics as most companies do something to differentiate the look of their devices. With the Braven 570, they choose to keep the design simple and clean with very little distractions. It’s more of a functional design but still looks quite stylish, in a minimalistic kind of way. 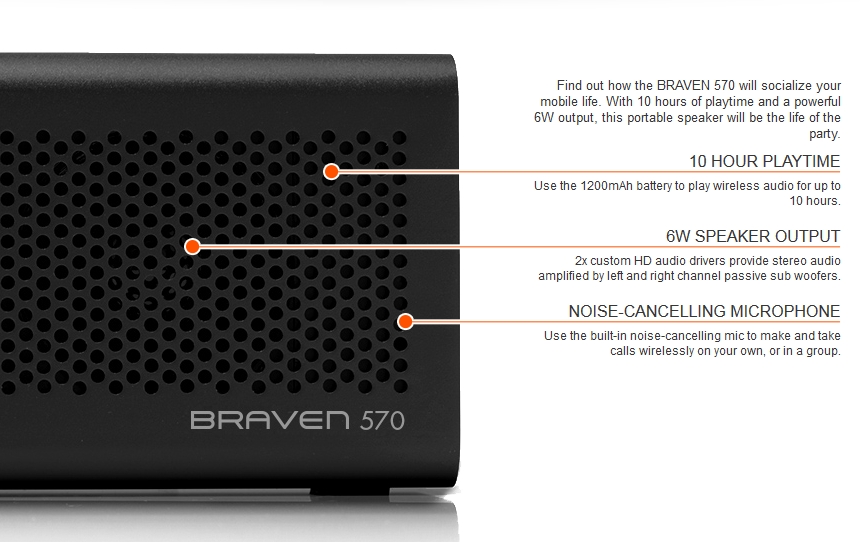 The otter shell is made from an impact resistant polymer that will withstand drops and bumps. Braven sent me the metallic blue version of the 570 and at first, I mistook it for an anodized aluminum. The finish of the metallic blue is superb and really does give off that aluminum vibe. Again, it isn’t. This of course has its advantages. The 570 is incredibly lightweight and unlike aluminum which when dropped, will become dented and distorted, the polymer shell of the Braven 570 will not do that. On the front and back of the main body, you’ll find a series of speaker holes precision drilled into the body which gives it a very industrial look. You’ll notice that it seems like there are no buttons at all on it as you don’t seen any up top. Instead, Braven has placed all the buttons and ports on the side of the 570. 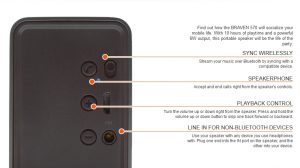 The sides of the Braven 570 are black and overall plain looking compared to the rest of the body. On one side, you’ll find the on/off switch, micro-USB charging port, audio-in jack, volume buttons, and the speakerphone button. On the other side, you’ll find the battery check light, an audio line-out jack, and a USB port to charge devices. Yes, that’s right, you can use the the Braven 570 as a portable battery charger if need be.

Like most other Bluetooth speakers, this one syncs up easily with your Bluetooth equipped mobile devices. Once connected, the Braven 570 will intercept all audio signals coming from your device, not just music. Getting started with the basics, the Braven 570 has its own volume controls. That means you can use it to set the maximum volume you want it at and then use your mobile device to adjust the volume through software. You have more control over the volume this way as opposed to a speaker that doesn’t have its own volume controls. 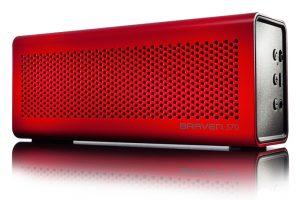 The main feature however that you want from a speaker is great audio quality. I can say from my time using the Braven 570 is that this is one of the best sounding Bluetooth speakers I’ve used. The sound is crisp and clear and doesn’t distort, even at its most maximum volume. It has no problems filling an entire room with sound or even several depending on the layout of your place. Treble is nice and high while the bass isn’t quite as thumpy as some might like. It doesn’t get too low in the bass, but it’s enough in my opinion for most songs out there.

If you think the Braven 570 isn’t quite loud enough or cover enough area, you can daisy chain another speaker to it using the audio line-out port. This is a feature I’ve only seen on a couple other speakers. What this means too is that it is possible to use the Braven 570 as a Bluetooth receiver for much larger speakers you may have. It’s possible to hook it up to an audio receiver you may have and in essence, turning that into a wireless unit. It’s a pretty neat feature and a handy one to have. 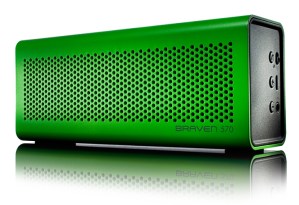 Another handy feature that again, I’ve only seen on a select few portable speakers is the ability to use it as a battery backup unit. Just plug in your devices charging cable into the USB charge port and your device will start recharging. Obviously you’re limited to what is left on the battery after you’ve been using it to listen to your music, but it’s useful in a pinch if you need a quick boost.

Last but not least, the Braven 570 works as a speakerphone. It’s not necessary to have this feature, but it’s always nice when it’s included. Since the 570 has a built in mic, you can directly at it and it will pick up your voice. The person you are talking to on the other side also sounds loud and clear. This is perfect for those who conduct business on their mobile devices but want a hands free method of talking with clients.

Overall, I find the Braven 570 a very satisfying Bluetooth speaker. I like the fact that it is very lightweight making it easy to carry around when needed.  It has pretty much has all the features I’d want in a Bluetooth speaker (Update: Scratch all that I just said about it not having playback controls. It’s not labeled all that clearly on the device, but you can in fact control playback with it. All you have to do is hold down the + volume button to advance a track or the – volume button to go back a track.)

(Update: Now that I know that the Braven 570 can in fact control playback using the volume buttons on the unit, that now means that the Braven 570 is the perfect speaker in my opinion. It does everything you want a speaker of this type to do. It plays your music, allows you to control both playback and volume, and it can function as a speakerphone. It’s light, very well made, and serves multiple functions. This is definitely one of the best Bluetooth speakers I’ve used.)