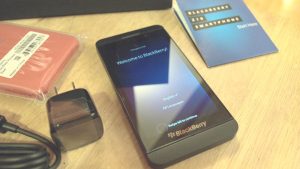 Man oh man what an event yesterday! Yesterday RIM (now known simply as Blackberry) announced the launch of Blackberry 10, and also announced two of its first new devices the Z10 and Q10. The Z10 being the actual first device to be available on a majority of carriers. The Z10 was also the device that was given out to all press in attendance and what we have right now. So here is some first impression about the Z10, later on we’ll have a full review.

First off, the Blackberry Z10 has a great look and build quality. This is something I expected, as Blackberry has always had great hardware. The Z10 is no different there as it looks and feels great. The Z10 comes in Black and White, with the unit I received at the event coming in Black. To be honest the Z10 looks a little like an iPhone 5. Not to say this is a bad thing, but it just has that same kind of look and feel of an iPhone 5. On the front of the device is all screen with limited branding with only the Blackberry at the bottom of the screen. Once you get to the sides, top, and bottom of the device you notice the nice metal finishing around the device. And then once you flipped it to the back you notice a nice rubberized feel to the back cover plate. The back is also an nice textured background which works with the overall looks of the device as a whole. 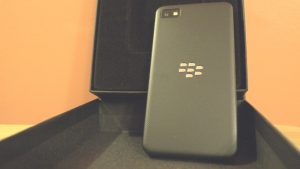 When you get beyond the looks, the Blackberry 10 OS feels very fluid. Moving around the Z10 was quick, snappy, and is pretty fun to use. I like features like Blackberry Peek which allows me to quickly see what new message has come in from various sources without leaving my current app. I also like the Blackberry Hub where all updates and messages are in this one central location. I also just got tickled about something I notice in the Calendar just not, so I’m slow combing through all the features I find.

That is all I’ve really gotten to use far, but I will definitely be back with more for the full review. After I’ve set it up, I’ll be using it for a good week or so and then I’ll be back with a full review of the Blackberry Z10. For now check out some of these un boxing shots! And let me know what you think about the Z10 and Blackberry 10 right now?