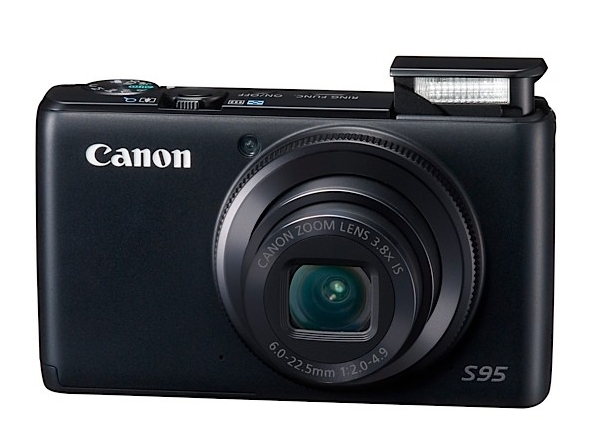 I’ve always been a huge fan of Canon digital cameras, especially their SD, S and G-series line of consumer cameras. I’ve owned many Canons and have even strayed off the path and owned a couple of Sony cams and a Panasonic LUMIX.

Lately I’ve been wanting to go back to Canon and the S95 might be just the camera to do it. It looks very similar to its predecessor, the S90 and features a lot of the same guts but unlike the S90, the S95 is thinner and now features a new high-sensitivity image sensor that allows for some major low light image capturing and 720P HD video recording. The S95 also includes a new HDR mode that will process HDR images internally which is a new feature not seen in other Canon cameras.

The main features of this camera that really peak my interests are its low-light image taking abilities, being able to record in HD, and the manual control ring up front that gives it a more old school camera like feel.

Building on the S-seriesâ€™ core principle of offering advanced manual control and low light performance in a compact body, the new PowerShot S95 takes the range to new heights, with features designed for users who demand maximum control and premium image quality in all conditions. The popular lens Control Ring, introduced with the PowerShot S90, has been improved with greater levels of flexibility, while a bright, f/2.0 lens and Canonâ€™s HS System provide an even more powerful basis for low light and creative photography. The PowerShot S95 is also the first-ever Canon compact to feature Hybrid IS technology, providing improved image stabilization for macro photography.

Improving on both the size and handling of its predecessor, the PowerShot S95 features an even slimmer body at just 29.5 mm thick*1, an improved multi-control dial and the same external coating used on the EOS 7D to improve slip-resistance and grip. Also designed to fit seamlessly into a photographerâ€™s existing workflow, the camera offers RAW format shooting and support for Canonâ€™s Digital Photo Professional (DPP) software.

Shoot in darker situations with f/2.0 aperture and the HS System
The PowerShot S95 includes Canonâ€™s HS System â€“ a combination of a high-sensitivity 10.0 Megapixel CCD sensor and powerful DIGIC 4 processing, which provides exceptional low light performance even better than that of its predecessor. The HS System enables the camera to support a maximum ISO of 3200 at full resolution and works to reduce the occurrence of noise at all ISO speeds for high quality images. Users can also set their own parameters in Auto ISO mode, with the ability to limit the maximum ISO speed they want to employ during shooting.

Using Low Light mode, the camera can also achieve an extended ISO range from ISO 320 to ISO 12800, capturing images at 2.5MP resolution. Manual control of ISO settings and white balance in Low Light mode also provide greater control over shots taken in darker conditions, allowing users to accurately capture the ambience of a dimly-lit environment exactly as they see it. Low Light mode also enables higher speed shooting, capturing up to 3.9 shots per second so a moment is never missed.

As well as providing the ability to shoot without the flash and still achieve correctly-exposed shots, the PowerShot S95â€™s high-sensitivity sensor offers a greater dynamic range compared to conventional sensor types. Tonal range representation is improved as a result, allowing natural looking pictures to be captured in all conditions. A bright, f/2.0 genuine Canon lens perfectly complements the HS System, allowing more light into the camera and providing greater ability to use faster shutter speeds and freeze the motion of moving subjects.

Unparalleled control
The PowerShot S95â€™s unique and enhanced lens Control Ring enables the adjustment of various shooting settings such as ISO (in 1/3 stop increments), shutter speed, aperture, focus and exposure compensation â€“ providing a satisfying and tactile experience. Offering even higher levels of customisation, the PowerShot S95 features a custom setting that allows the user to pre-set the function of both the lens Control Ring and the rear Multi-Control Dial in various shooting modes. A dedicated shortcut button can also be configured to provide instant access to pre-selected functions, offering the photographer easy access to settings during shooting.

To track subjects that are in motion, or to help achieve a creative composition, a new Tracking AF mode offers the ability to select objects from the centre of the frame and track them if they move, or if the frame is recomposed.

The handling of the Multi-Control Dial has also been redesigned following feedback from owners of the preceding model. The dial now features a more pronounced â€˜clickâ€™ mechanism, preventing any unintentional changes to settings. Furthermore, the positioning of the â€˜Ring Func.â€™ and â€˜On/Offâ€™ buttons has been revised, providing greater all-round operation in everyday use.

HD movies with stereo sound
The PowerShot S95 features 720p HD 24fps movie recording with stereo sound. The inclusion of Miniature Effect in movies also adds a completely new dimension to video footage â€“ shooting at a slower frame rate for dramatic and compelling time-lapse-style videos which appear of model scale. An integrated HDMI port with CEC compatibility makes it simple for video and stills to be viewed and controlled directly using a compatible HDTV and remote control.

Capture scenes as you see them
A High Dynamic Range shooting mode allows the capture of high contrast scenes closer to how they appear to the human eye. Exceeding the limitations of conventional cameras, the PowerShot S95 takes three different exposures of the same scene*2 before analysing and combining shots to create a single image in-camera. The result is an image that captures highlight and shadow detail closer to how the photographer sees it.

Instant, creative results
The PowerShot S95 includes a range of shooting modes to match the desired level of control or the photographerâ€™s skill. In addition to the flexibility of Full Manual control and semi-automatic Aperture priority (Av), Shutter priority (Tv) and Programme AE modes, the PowerShot S95 also features Smart Auto for those who simply want to capture great shots instantly.

Scene Detection Technology within Smart Auto helps to provide the best results in all conditions, intelligently detecting the scene and selecting the optimum settings from 28 variables. Hints & Tips messages within the UI also make everyday operation as simple as possible, intelligently guiding users through the cameraâ€™s menu and offering a short explanation of each feature before it is selected.

Smart Flash Exposure controls flash levels according to shooting conditions, providing the right amount of flash to ensure perfectly exposed shots in all situations, from darker rooms to bright sunlight. The PowerShot S95 also offers Multi-Aspect shooting, with 3:2, 4:3, 1:1, 16:9 and 4:5 formats supported. Allowing photographers to shoot according to their subject or the intended use of the image, Multi-Aspect shooting provides the ability to choose which composition and result they want to capture as the image is taken, without the need for post-processing.

Providing excellent all-round image quality and excelling in low light, the PowerShot S95 offers an extensive feature set designed to deliver outstanding performance. Built for those who want the perfect combination of portability, power and control, itâ€™s the ultimate pocket-camera for the even the most advanced photographer.

Share stories with CANON iMAGE GATEWAY
Owners of the PowerShot S95 can join the CANON iMAGE GATEWAY, an online facility for sharing photos and video. Photographers can take advantage of up to 2GB of personal storage capacity, creating enough room for hundreds of high-quality images. Mobile browsing is also supported, making it easy for friends and family to view photos on the move.

*1 CIPA Compliant
*2 Tripod required for High Dynamic Range shooting
*3 This product is not guaranteed to support Eye-Fi card functions (including wireless transfer). In case of an issue with an Eye-Fi card, please check with the card manufacturer.
Also note that approval is required to use Eye-Fi cards in many countries or regions. Without approval, use of the card is not permitted. If it is unclear whether the card has been approved for use in the area, please check with the card manufacturer.