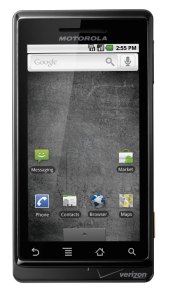 I had the opportunity to spend a week with a Motorola Droid and I wanted to share my impressions as a Palm Pre Enthusiast/Fanatic. I must say that I grew very fond of the Droid in the short period of time that I had to play with it and if WebOs wasnâ€™t available I would seriously think about getting a Droid. Itâ€™s a great phone.

There is lots to love about the Droid but lets talk about the bad first. Iâ€™m sure youâ€™ve heard it before and Iâ€™m definitely going to say it again; the keyboard stinks. Motorola needs to talk to HTC about how to make a horizontal slider keyboard. HTCâ€™s Touch Pro 2 keyboard is the best horizontal keyboard I have ever seen. It is quite awesome and would have made my fingers happy. But unfortunately Motorola gave me a flat keyboard that was offset to the left by a useless trackpad. If I used the physical keyboard I had to retrain my left thumb to press letters that it wasnâ€™t used to pressing.Â  For this reason I found myself using the virtual keyboard 98% of the time. The virtual keyboard was pretty decent in my opinion despite what Iâ€™ve read from other reviews. I like the fact that it suggests words as I type which is quite handy. The phone also does really look like a brick. I would prefer more round edges like my Pre but thatâ€™s not really a deal breaker. Also the LED notification light seemed a little puny compared to the Sprint Hero or other Blackberry devices that Iâ€™ve used and even my Pre. Sometimes I wouldnâ€™t notice it, but perhaps thatâ€™s just me.

Now onto the good things about the Droid. There are so many pluses that I was thoroughly impressed. Performance was fantastic.Â  The speed with which applications opened was pure joy. I rarely experienced a lag. Sluggish performance is something that I have come accustomed to with WebOS but that was not the case on this Motorola Droid running Android 2.01. Palm really needs to fix the fact that it takes sometimes more than 5 seconds to open an app.

The screen on the Droid is a beautiful size and it was really pleasurable to use. Rotation was quick and responsive and moving around between different menus felt smooth. While the browser didnâ€™t have multi-touch I didnâ€™t really miss it if Iâ€™m being honest. I loved the fact that the web pages initially load zoomed out now as opposed to zoomed in on previous version of Android. 2.01 is a big improvement over the Sprint Hero that I used a few months back. I also realized that I prefer not to have HTCâ€™s Sense UI. I liked the simplicity of Android on the Droid. I didnâ€™t need seven home screens especially without a way to easily jump between them. I loved the enhancements in 2.01 to Google Talk like swiping to change conversations and taping on a buddy icon to display additional ways to communicate with that contact. I loved that the Marketplace had screenshots and just looked better overall and more polished.Â  Using voice search was wonderful and accurate most of the time and universal search was also a welcomed addition. I even liked the Droid notification sound. I was tempted to put it on my Pre but that would just be weird, right?

And as always I loved how easy it was to customize Android. I was able to change my SMS application to use Handcent SMS and I had I plethora of other applications for Twitter and other Social Media sites at my fingertips.

I must say that I miss the Droid. It was fast and did exactly what I expected a phone to. I could definitely see myself using it as my daily device. It is missing some of the features that I have come to love from WebOS like gestures, synergy, combined SMS and IM and just an elegant interface but the Droid definitely packs a punch. It spoke to the geek in me that loves sheer power and performance. If the Droid was on Sprint it would absolutely be a contender, even with itâ€™s horrible keyboard. The Droid is the best Android phone I have ever used.Â  It made me like Android again.Â  I would have loved to have the phone with 2.1 running but Verizon has not seen it fit to push the update yet.Â  Perhaps I will get a chance to use the device again once the update is out and give some additional impressions.Â  I would without a doubt jump at the chance to reunite with such a good phone.