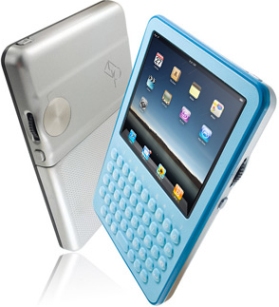 So Apple revealed their iPad device and the tech (nerd) world was left underwhelmed. We even weighed in on it here at G Style and at the end of our discuss we all decided we wouldn’t recommend or even buy this thing. You see for a device that is suppose to be the in between of a smartphone and computer, to us geeks it left much to be desired. Most of us already have a Laptop, Macbook, iPod, iPhone, or iPod Touch so a bigger version of that seemed like a waste. But then I took a moment to think about what the iPad represents. Honestly they didn’t build this thing for us, this is for the people who don’t want to or know how to really use a computer. This is the Peek of computers!

If anyone isn’t sure what a Peek is, I’d suggest you take a look at our review of one here. To briefly recap the Peek is a email only device. It does one thing and one thing only (though now they have the TwitterPeek which does Twitter and Twitter only). The Peek was intended for people who thought a smartphone was too complex for them, but wanted their email on the go. In essence this is what the iPad is to computers. The iPad isn’t intended for us geek who already know how to use, hack, and modify our machine. This device is targeting that group of people who just wanted to use the basic functions of a computer without the hassle of needing tech support to do it. This is that Oprah crowd to say the least lol.

Now I don’t know how well Peek devices are selling, but as far as the iPad, I can see it selling well. For one there is the Apple name behind it. Apple has sold iPods, iPhones, and more very well. To think that this won’t be a good selling is foolish. Sure us geek think that this iPad is seriously lacking, but think about it this way, it wasn’t made for us. It was made for everyone else not like us. It was made for everyone else who likes their technology is little bit size portions. This is their device! This is their Computer Peek!