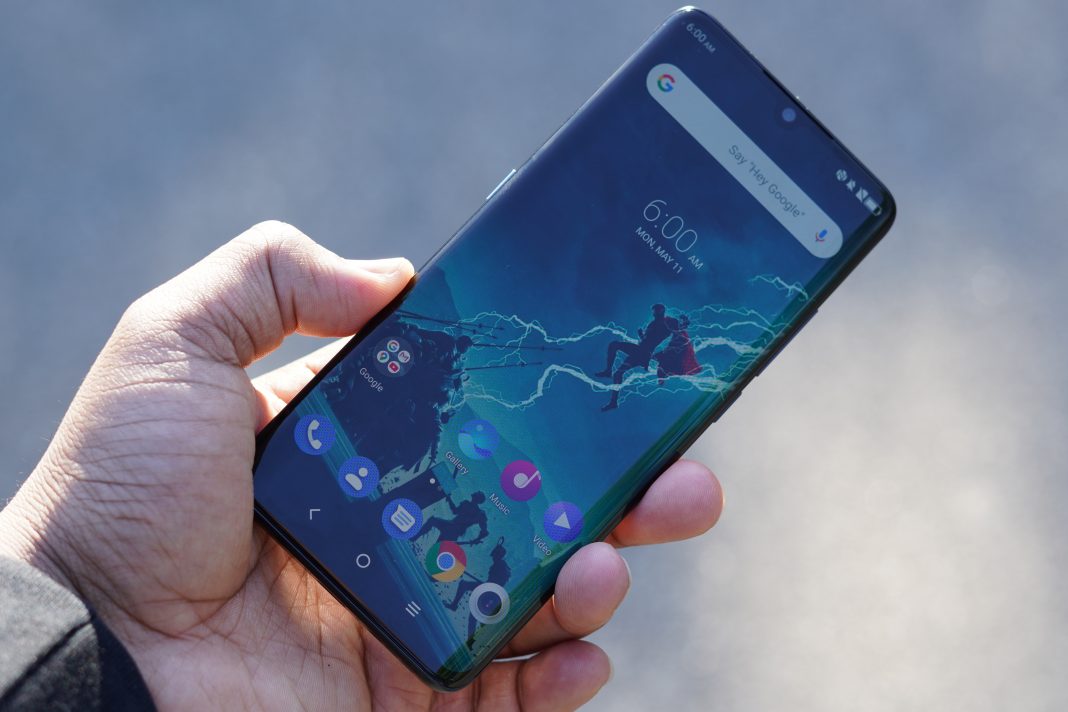 Its been a few months since the release of the TCL 10 Pro and its less expensive sibling TCL 10L. While we covered the 10L a couple months back I just felt I wanted to spend more time with the 10 Pro. Seeing as this was more of TCL’s “flagship” post-BlackBerry I wanted to see how it handled over time.  Let me just say I wasn’t disappointed.

Like I mentioned in the 10L Review, TCL has an eye for aesthetics, and it can be seen on the 10 Pro. It wields Dual-sided 3D Glass and comes in finishes of Forest Mist Green and Ember Gray. TCL had provided us with the Ember Gray seen all throughout this review. While it is glass it is practically free of any fingerprints on the back panel which is a delight. Also hasn’t managed to gain any scratches or blemishes.

The phone feels solid but not heavy coming in at 177g. TCL managed to keep a headphone jack on it and even brought an IR sensor alongside it. Not sure how many requested one but it felt good to have one back on a smartphone.  On the bottom is a Type-C port capable of fast charging and a mono speaker. It gets loud but I still prefer dual speakers.

Mirroring the 10L, Volume controls and Power button are on the right while a Smart Key is on the left. It can be programmed in three scenarios. I tend to have NXTVISION as a single press, double press for the High Pixel camera, and Long press for Google Assistant.

Under the hood of the TCL 10 Pro we have a Snapdragon 675 chipset by Qualcomm being paired up with an Adreno 612 GPU. Alongside that is 6GB RAM and 128GB of storage with expansion to 256GB via microSD. Its slim frame is hiding a rather large 4,500mAh battery. We rarely even get 4K batteries inside some flagships. Best of all its fast charging and can go from 0 to 50% in 30mins. With it being this massive you can use it to juice up other phones or other devices thanks to supporting OTG. I tested it out charging another phone and headphones via Type-C.

On the audio side even though its mono speaker packs the same features as the 10L I thought it sounded slightly better. It may also have to do with the position of the grill and not covering it up as much with your hand. If you want to forgo the speaker altogether you can plug into the 3.5mm jack.

The fact they brought the IR blaster is a nice addition. Its smart on TCL’s part seeing as they create TVs and other devices anyway. I have used it on a variety of devices such as my TV and Sonos soundbar and it works with ease.

TCL 10 Pro is an unlocked GSM smartphone and works with carriers such as T-Mobile, AT&T and even Verizon. Its certified for VZW’s LTE network. I have used it for the most part on the Verizon network getting decent speeds and coverage through NYC and other areas such as Rhode Island.

Gaming worked smoothly on the 10 Pro ranging from playing Call of Duty Mobile, Fortnite and Candy Crush Friends. Far better experience than the 10L which would not play some of these games or would lag slightly.

Didn’t expect TCL to falter in this category seeing as they have created some stunning TV panels over the years. Here we have a 6.47” FHD+ AMOLED display (1080×2340, 398ppi). It provides detailed colorful visuals that spill out slightly on both sides thanks to its curved body. While NXTVISION wasn’t bad on the 10L it shines more on the 10 Pro giving off better enhancements to your media content. Its noticeable while checking out the Netflix app. Since the 10 Pro is HDR10 Netflix certified and NXTVISION works in conjunction the results are impressive.

Only gripe is since the display wraps around the phone essentially, I have come across accidental button press and other actions. So sometimes you must be beware how you hold it in your hand.

Their TCL UI software is rather fluid and easy to use even for the novice smartphone user. Its vibrant and has eye popping visuals from charging the battery to just going thru the Gallery. Right now, it’s using Android 10, but TCL says it will support Android 11 whenever that officially launches. I did not find much issue with the OS using it on the daily and TCL has been pretty good providing software updates over the past few months thus far.

Not sure how TCL did it, but they managed to eliminate the ever-growing “camera bump” we been seeing increasing in smartphones. Hence, it is even in their own TCL 10L. But yeah, their Quad-Lens setup with LED flash sit flush in the back of the phone with no ridges or groves. The four lenses are 64MP (Ultra High-Res), 16MP (Super Wide), 5MP (Macro), and 2MP (depth).  Its selfie camera is packing 24MP.

For a quick point and shoot it takes some nice photos. For more scenic shot it seems to provide pretty color accurate images. For objects that featured more color it seems to make that the focus punching up the details a bit. Sometimes looking a bit oversaturated at times. It didn’t do bad in low light or dimmer areas. I have some phones that fare worst in this department. But yeah, I feel it excels in well-lit locations.

After using the TCL 10 Pro over the past few months, its an exceptional phone. Has a well-crafted design and large, impressive battery life. It moves at a decent speed and takes cool pictures. Its accidental touches thanks to its curved display may frustrate you at times. For TCL’s first round into the smartphone realm I would like to see what they come out with next. At $449.99 it sits itself next to competing phones such as the OnePlus 7T and Pixel 4A.