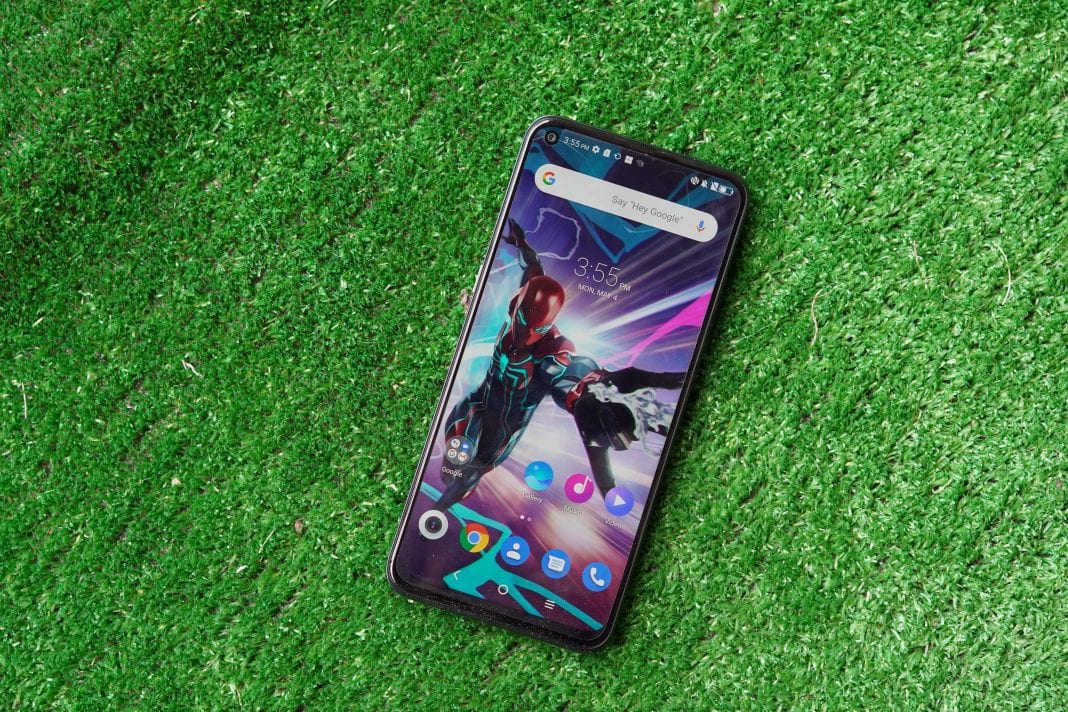 Over the past couple of years, we have seen TCL looking to be not just known for their TVs but also dividing into other areas such as audio however revamping itself in mobile phones. Some are not aware they were the hardware power behind that reappearance of the BlackBerry the past couple of years with the KEY series.  This time around they are looking to come out with their own branded smartphones called TCL 10-Series.  They have a slew of smartphones available but here we will be dividing into the super affordable TCL 10L.

I always admired the hardware choices TCL has made and it shows here with the TCL 10L. Its available in two colors of Artic White and Mariana Blue. They were nice enough to provide us with the Blue model of the 10L. At first glance it is a darkish blue color but depending on how the light hits it can change slightly producing some interesting views. TCL calls it a holographic and glossy 3D finish and it shows.

The phone itself feels solid in the hand and doesn’t give you the sense it will slip out. It weighs in at 180g. There is a headset jack on there if you still got a pair of wired headphones lying around. On the bottom is a Type C port and next to that is a speaker.

Volume Controls and Power Button are on the right side, leaving the left side with a Smart Key by its lonesome. Its programmable and you can set it for anything with three different scenarios of using it from a long, short, or hold press.

Size wise this is a tall phone with a 6.53” FHD+ Dotch display (1080×2340, 395ppi). You are getting a decent screen to body ratio of 91% with just enough space around the edges. Looking at the display it can look a bit washed out to me at times. Like its just missing a bit of color and looking dull. Surprisingly, TCL has an enhancement of sorts with what they call NXTVISION. I like to call it a tuner that pushes up the brightness and details of the imagery or video you are looking at. I feel like it is a slight difference on the 10L and frankly do not see why you turn it off.

The device itself is powered by Qualcomm’s Snapdragon 665 chipset and utilizing an Adreno 610 GPU. It comes with a decent 6GB RAM and 64GB of storage. You can grab a microSD card and expand it out up to 256GB. I would have liked to see it with 8GB RAM but given its price point it is a bit understandable. Its packing a beefy 4,000mAh battery which you still do not get in some of the flagship devices out there.  10L has a fingerprint sensor on the back that is responsive to the touch. Good if you don’t want to go the way of face unlocks or rely fully on pin codes (both which are available).

Not a fan of the mono speaker on the bottom has it sounds hollow and tinny. If you are watching or playing a game in landscape, you will most likely end up covering it up. Even you are an audio person though, they have equipped the 10L with a 3.5mm audio jack. Always good to see those pop-up time to time on devices.

I took it up on a bit of gaming to see how it would run some titles. Fortnite would not run on the 10L but Call of Duty Mobile will and with ease. Weirdly a game like Candy Crush Friends appears to lag. Asphalt 9 is handled smoothly by the 10L.

TCL 10L is an unlocked GSM smartphone and works with carriers such a T-Mobile, AT&T and yes even Verizon. Well its certified for their LTE network. I had started out using it with T-Mobile have been running with Verizon since. Coverage has been steady; speeds haven’t been bad, and reception is thumbs up. Nice to see Verizon supporting more smartphones even in this price tier.

Android 10 is on the device out the box which is good. Nothing special about the UI. Looks pretty vanilla and I do not feel too feature heavy with anything. It has everything you need but if it does bore you, there are launchers you can always download like Nova. As mentioned earlier the big thing the TCL 10L has going for it is NXTVISION. Seeing as it has a big emphasis on video content and gaming its a nice addition.

This is the year you will a lot of smartphones with quad camera layouts and the 10L is no exception. It is equipped with 48MP (high-res), 8MP (super wide), 2MP (macro), and 2MP (depth) lens.

Shooting straight out the camera no adjustments it is okay at best. If you take more time to focus your images, lighten or darken them a little you will get some better shots. I feel like the camera is hit or miss though. Some photos will look over-saturated and some not. But I think tinkering around with the different lens you can have some fun if you try. Selfies look detailed but the portrait blur looks a bit weird.

With its price point of $249.99, TCL looks to be making a nice entry into the lower-end aka budget tier of smartphones. The 10L has a nice solid build, huge battery and decent processing power. Its display is not bad, and it being unlocked allows it to work with multiple carriers. There are some things that could be better but given how much it cost it is a nice addition to this tier of devices.