Destiny 2 since it’s departure from Activision has been a great experience thus far. I thoroughly enjoyed Shadowkeep, the new raid and Season 9 has been a lot of fun for me to play, so much so, I got my first title Savior as a result.

When the announcement of Season 10 came about, the Destiny player in me was excited, until I saw the trailer. I was disappointed and dejected. This is what Bungie managed to come up with? The Cabal are sending their Almighty Sun sucking ship barreling towards Earth and we the guardians are in a race to stop them. Real interesting story line (I’m being totally sarcastic). What’s even crazier? When I first saw the trailer I was initially excited because I saw Rasputin and I thought that Bungie may have been going back to the war with Siva. The Rise of Iron and the Wrath of the Machine raid was some of my all time favorite Destiny content. But nope. We got this shit.

I’m normally never this critical of Destiny 2 content. I always try to see the best in the content and enjoy it as a fan of the game and while the Season of the Worthy isn’t terrible, it just isn’t good at all. This “new” content feels exactly like what I just got finished playing in the Season of Dawn with the Obelisks only this time it’s more grindy and more boring. I’ll tell you what I liked and what I didn’t like and you can make an assessment from there.

SEASON 10: SEASON OF THE WORTHY ROADMAP

As with every new season in Destiny, there is a roadmap or schedule of events that are going to take place for the next three months. This past weekend was the first run of Trials of Osiris. Here’s what you can expect going forward. The Grandaster Ordeal Nightfall is the most intriguing of all the new events in the roadmap IMO. No new raid for now but things can change.

AUTO RIFLE BUFF– Although I am not a big fan of Season of the Worthy, there’s things to like about this new season. First off for me was the buff of the auto rifle. Long before now the auto rifle was kind of a joke in the world of Destiny. Especially within PvP. Shotguns and most recently SMG’s seemed to rule PvP which in essence made it boring and more focused on close range combat more than anything else. A lot of PvP players are average to above average at best and not everyone is able to use a shotgun very well. Most of us did not grind for the Mindbender’s Ambition and other choice shotguns so if you’re better at mid to long range combat then PvP would be no fun for you the way it was. With this buff, you can now use your Suros which is a beast, the Steelfeather repeater with the right roll, Hard Light which is ridiculous right now and a wide variety of Kinetic and Energy auto rifles. This puts more of a focus on 1v1 combat forcing you work on your aim and ability to pick your spots and fire first. This something I always wanted in PvP. Far too often certain players were getting away with sneaky one shot kills with OP shotguns and fusion rifles and it would piss me off. I hated PvP for that reason. It’s much more of a level playing field now. Although you can expect to see a shitload of Suros’ and Hard Light’s dominating the crucible.

TRIALS OF OSIRIS – The reintroduction of the Trials is something Destiny players really wanted to return. Bungie took notice and brought Osiris back into the fold and a really good storyline with Saint-14’s return that makes the Trials that much more interesting. The best of the best in PvP line up to play the Trials once a week for some of the most coveted gear in the game and bragging rights if you go flawless. Popular Destiny 1 maps make their return and add variety to the Trials so it isn’t focused solely on long range tactics which would only serve snipers and scout rifle players best. Now you have to make adjustments within the trials for long and short range gunplay. The only thing that sucks is that you gain Valor points instead of Glory points for what is supposed to be the most difficult element of PvP play. That decision I still don’t understand but it is what it is. Trials is back and I’m here for it.

WHAT NOT TO LIKE ABOUT SEASON OF THE WORTHY

THE BORING ASS GRIND – There’s one thing and one thing only about Season of the Worthy that sticks out and makes this new season hard to want to play and it’s the boring ass grind. The grind wasn’t so bad in the Season of Dawn because we had a new dynamic. There was a lead up to something, a goal. The Trials. Saint-14. Ritual Weapons. A raid. Building up the Obelisks to achieve said goals. With this season, I don’t feel like there’s a goal. There’s just a grind based on a weak story and that’s it. The Seraph Tower public events are a snooze fest. It’s the escalation protocol all over with just a slight change in execution and difficulty. The currency that the bunkers and bounties require with warmind bits and chipsets are a pain in the ass to have to farm for. The confusing AF and convoluted tiered rank system for the bunkers make that grind even longer.

The lack of viable and useful ritual weapons offers no incentive to come back to Destiny to maybe run a bunch of crucible, gambit, strikes or whatever event is required to gain that weapon. As of right now there’s only one ritual weapon to be had this season. To top it all off, the ability to increase your light level is still as bad as its always been. This season feels like it took a step backward.

It’s hard for me to want to get online and play Season of the Worthy right now. No bullshit. I don’t at all mind a grind because after all when you play Destiny you understand that a grind comes along with it but it should be worthwhile with some kick ass weapons, a raid, raid lair, introduction of a new dynamic or event. Something. This completely lacks that and playing Destiny 2 right now feels like a chore. I have to do it because I want to remain viable in the game. It’s not fun.

My mini rant aside, I’m going to remain faithful to this game because I’m a Destiny player. Yes, it seems contradictory to the point of the article but I’m a dedicated fool. Just because I am however doesn’t mean that whatever Bungie put forth isn’t worthy (no pun intended) of critique. This is where I am here. All I’ll say is, the Destiny player in you if you’re serious about this game should go forth and get your grind on but I completely understand if you just don’t feel like it because right now, it sucks and that’s what it is. Fix it Bungie. Good thing is, Bungie is VERY receptive to the feedback of the community and I hope that with enough complaint about the mundane grind they’ll make some changes and it improves a little bit. I’m hopeful. 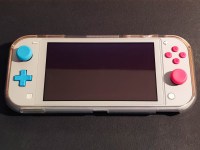