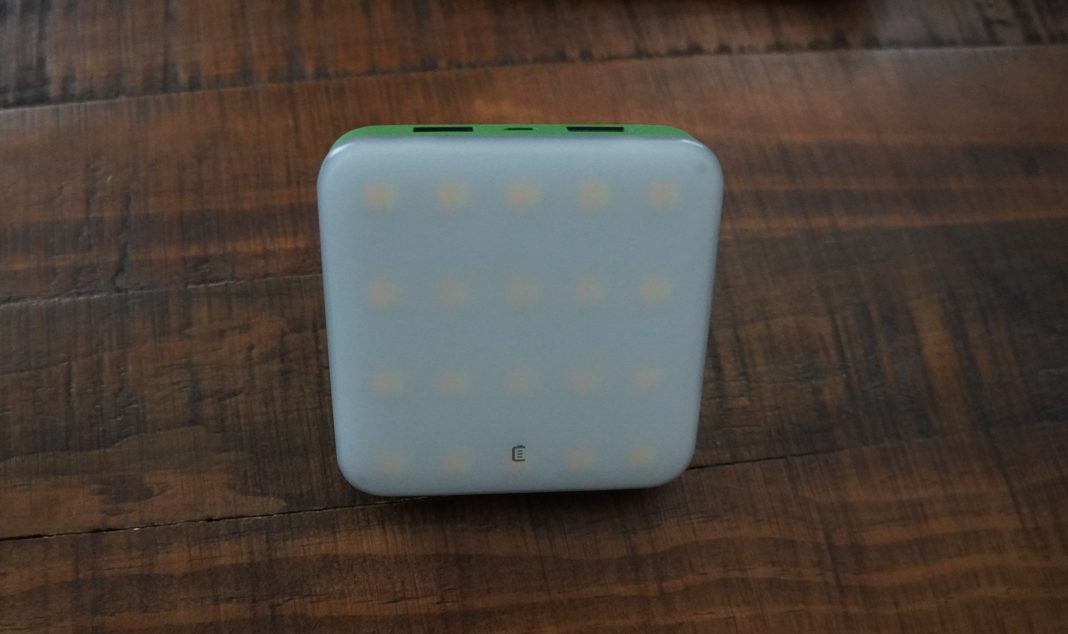 MyCharge had camping and the great outdoors with this device which they call the Camping Lantern Power Bank, but I also seen it call the MyCharge Lumen as well. In any event I found it to be a life saver and living up to being more than just for the hitting the terrain.

The power bank is a square shaped that comes in a mostly green colorway with the front of course showcasing that huge light source. On the back is there is a stand that folds out if you want to have it sitting in an area to continuously shine light or even can be used to hang it from various spots as well. Power button on the side gives you access to the four light settings and will activate the battery led indicator on the back.

Even though this is high powered lamp you might also forget it’s a 10,000mAh battery too. It has two USB-A ports with 2.4A Max and can be charged via microUSB. I would have loved it support the continuously growing Type C though.

Included is a microUSB cable.

So originally, I saw the MyCharge Lumen back at CES 2019 and it was one of my fave things they showcased that year. Eventually getting hands on it, I found its usefulness moreseo to help give that extra bit of light whether doing product shots or shooting video. Its four different levels of brightness help achieve that perfect tone as well. Speaking of CES, this year for 2020 it helped shine in places were lighting wasn’t ideal. You be surprised how many people had questions about it too.

If you ever find needing an extra bit of light whether its outside or trying to get that perfect capture on a camera shot, MyCharge has a hidden gem with this one. Also, the fact its dual use is a 10k mAh battery and charges your smartphones and tablets its definitely a keeper.

myCharge Camping Lantern Power Bank is available for $59.99 via Amazon.