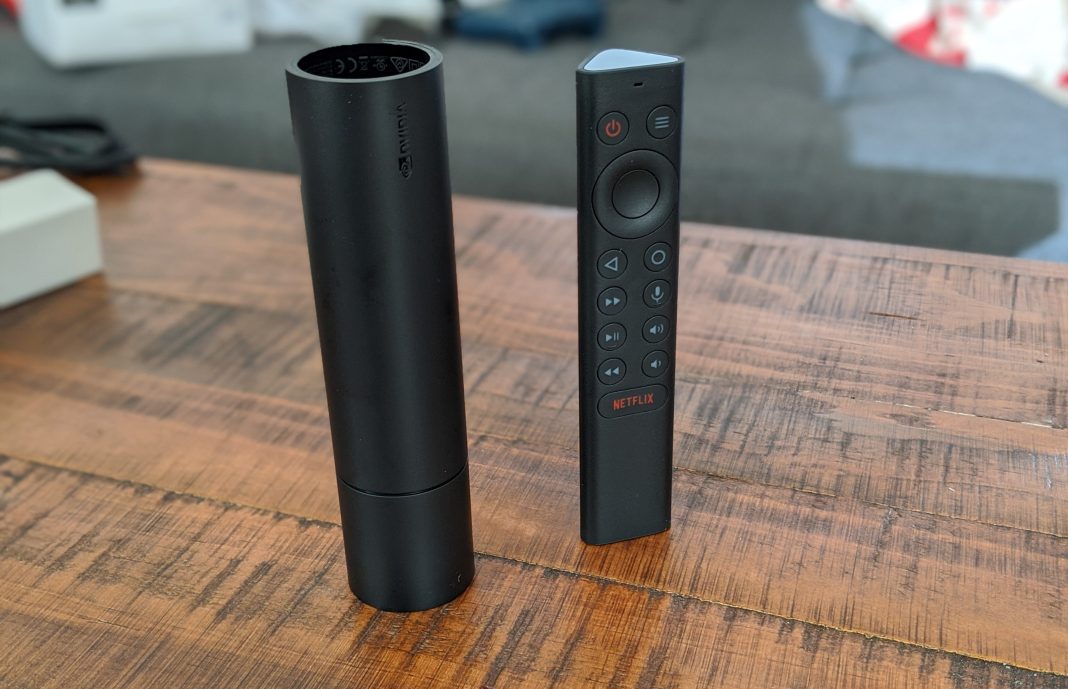 Five years into its life cycle and the NVIDIA Shield TV continues to push on and evolve its branding.  When it first was revealed it was more ahead of its time and whether folks really needed streaming boxes in their homes. Flash forward now and everyone has “Firesticks”, but they are inferior especially when compared to the Shield TV.

Not too long ago, NVIDIA did its 3rd refresh of its Shield TV updating the inside of the model we have grown to love calling it “Shield TV Pro” but also giving us a fresh look at what is simply dubbed “Shield TV”.  With this new take Shield TV keeps some of the same and changes things up a bit.

For starters you will notice NVIDIA has drastically changed the design giving us this long cylinder tube.  There definitely isn’t any of the other streamers looking like this so its in a league of its own. In any event its weights less than 5oz and is 1.57 inches all around with ports on both ends. One end has HDMI 2.0 and microSD while the other has Gigabit Ethernet and Power.  No green lights or indicators and its intention is to not be seen or heard. Frankly I have mines on the floor behind my TV stand. You wouldn’t know its there laying next to the wires unless you were looking for it. I did like showcasing the NVIDIA Shield, but I guess it saves on shelf space with this.

The “new” Shield TV has an updated NVIDIA Tegra X1+ processor w/ 256-core GPU, 2GB RAM and 8GB of storage. If you opt for the “Pro” edition you will get 3GB RAM and double the storage at 16GB. They both have 802.11ac 2×2 MIMO 2.4 GHz/5GHz Wi-Fi, Bluetooth 5.0+ LE and as mentioned earlier Gigabit Ethernet. I typically use the Ethernet but its been smooth so far with streaming.  You get Dual USB 3.0 on the Pro while its been opted out this regular edition.

A New Remote Has Entered the Arena

With the 2017 Shield TV we got a slightly modified remote and a badly needed remodeled Shield controller but looks like NVIDIA heard the cries for those that rely solely on the remote. No controllers are included with either model this time, but the Shield Remote has gotten a huge facelift.  Its bigger, triangle shaped and can stand straight up or on its side. Either way it makes it easier for gripping. It has backlit buttons which come on soon as you pick it up thanks to motion detection and it has Bluetooth and IR functionality. Thanks to IR you can program it to work with your TV or sound system.

I have mines controlling the volume on my Sonos Beam. If anyone owns a Sonos this is a godsend as Sonos devices don’t come with remotes and you must rely on your smartphone.  The new remote is one of my favorite additions even though that Netflix button is rather huge and gets pressed on more than you want to accidentally. There is a remote locator in case you misplace it as well. The settings button can be reprogrammed to various options from opening settings to taking screenshots.

Besides a shiny new remote, NVIDIA has added some tweaks that will try and give you the best high def experience possible from a streaming media box. Dolby Vision / Dolby Atmos have been decoded in the box to help give you some of the best sounding and looking content around that supports it for course. In the other models it supports the ability for it to pass-thru. Another feature they added is AI Upscaling. NVIDIA wants to make your HD content (1080p and below) look close to 4K. You can notice the difference if you are looking for it but its definitely there. If you aren’t sure if you can tell or not, Shield TV has a tester option where you can toggle between the two on and off. I tried it with Rouge One on Netflix(not Disney+) and you can see added brightness and a bit more detail. It looks better on newer content and animation is the best indication of change. I imagine over time it will adapt more and more. You can also toggle how much change or detail you want. As depending on the content it may look better or worst with upscaling.

I still use the Shield TV with my typical apps such as Amazon Prime, Netflix, Vudu, Google Movies, YouTube, Plex, HBO Go, Disney+ and more often now YouTube TV. Still holds up smooth for casting sites from my PC to it as well for other videos as well.

Best Media Streamer Out There

With a starting price of $149.99, it makes the Shield TV more feasible for consumers to go out and purchase compared to its $200+ level it had out before. I gather removing the controller helped especially if some weren’t even using it. Plus, you can pretty much use any Bluetooth controller such as an Xbox One controller with the Shield TV at this point.  Its still one of the most expensive streaming devices up there with Apple TV but it has some of the best support out of all and continues to expand.

If you feel the need for more storage and slightly more speed you can get the Shield TV Pro $199.99.