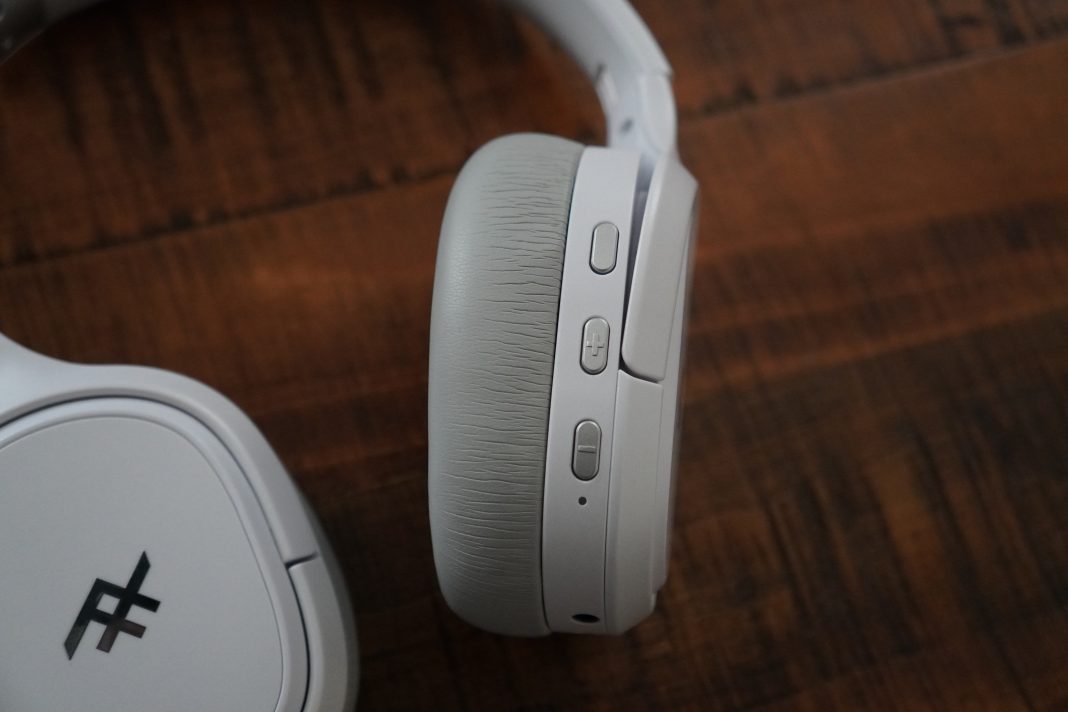 Mostly an accessories brand starting out, iFrogz has morphed more into an audio brand over the years. Offering headphones/earbuds at an affordable price while trying to give you the essentials needed for a nice listening experience. This year at CES we got a chance to check out some of their new products including the Vibe Airtime ANC headphones. They feature a reasonable price for the average consumer and give you ANC capabilities. But how are the AIRTIME Vibe for daily use?

iFrogz created the Airtime Vibe with three colorways of Blue, Black, and White. I opted for the White color. Even though they are whiter with gray accents in the symbols, buttons and plush earpads. The earpads surprisingly are cushioned and cover my entire ear with ease. I would have liked to see a bit more of this cushion on the headband as it’s a bit on the thin side. The headphones themselves have rotating earcups to lay flat around your neck on a surface. They are also collapsible for easy storage in a backpack or bag of choice.

All ports and controls are accessed on one side. Volume Controls, Play/Pause, Bluetooth, Audio Jack, and microUSB are all on the right. Yeah, they are using microUSB to charge up so hopefully you still have some wires laying around if you have started going into Type C territory.  Aesthetics wise they feel a bit cheap and plasticky but at the price point it’s not really something to argue. They are sweat resistant with an IPX2 rating if you want to work out or get caught in the rain with them.

Airtime Vibe gives its simple with audio controls that can be achieved via the buttons on the headset. Holding either Volume button will let you skip tracks and there is a NC button to toggle off/on the active noise cancelling option. No apps to make any these changes like we have started to see emerging on other headphones. Not a deal breaker by any means.

Battery life is slated for 30 hours of usage while 25+ with ANC on. I haven’t found myself really charging these which is a plus. I will say though make sure you do turn them off as they don’t have any type of auto shutoff. I tested this leaving them all day without any activity or connection. Good thing out of it is the battery lasted the whole time.

As mentioned, the headphones feature active noise cancelling. It’s very easy to switch and you will get an audio prompt. With noise cancelling on you will notice some of the surrounding area eliminated around you but not fully. Its noticeable more on trains and so forth. They weren’t too bad on my flight back to NYC from CES though. Interestingly though I found they sounded better with ANC off. Vocals were crisper and bass was punchier. With it on, you notice the isolation, but everything feels a bit pushed to the background and can be slightly muffled.

I have been using these for the past couple weeks on and off and experience has been decent. Don’t take long to charge and battery lasts a while which is good. I mainly used them with a OnePlus 7T and while connection for most part was pleasant there was distortion times that arose whether I was walking or standing still. Wearing them for long periods of time didn’t give any discomfort which a is plus.

For the entry price of $99.99, iFrogz has created a cool pair of musical cans that have a nice battery life, are rather comfortable and provide some decent audio. Some stuff I’d like to see improved but it’s hard to complain about much with its price tag.