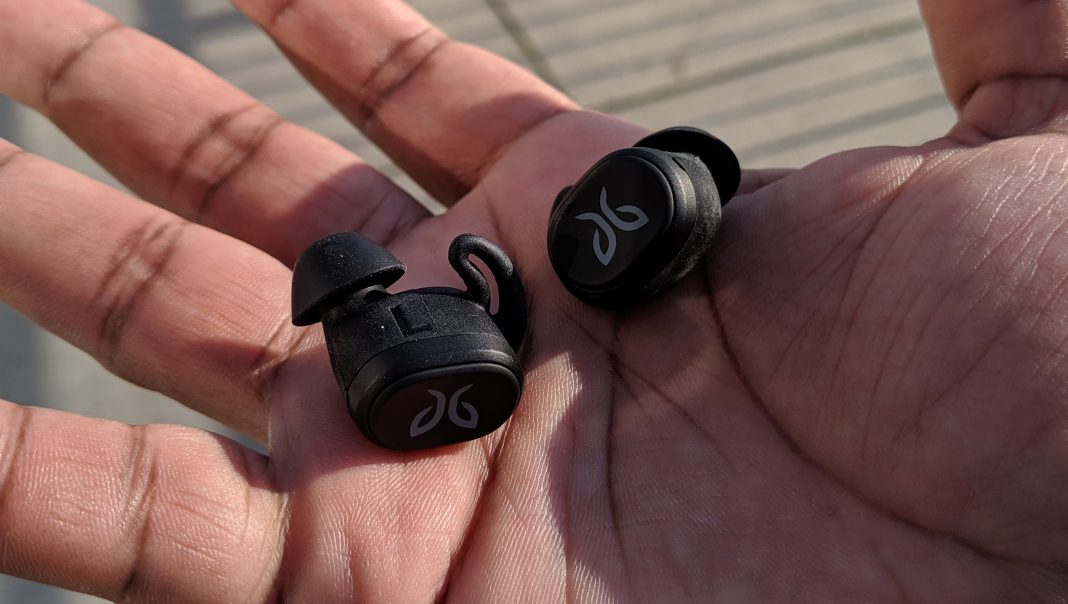 Third times the charm for Jaybird as they enter back into the truly wireless atmosphere and things are looking good. Their latest entry is called Vista. Jaybird manages to fix some of the woes of its prior installments and the outcome presents some of the best wireless earbuds to pop in my ears this year.

Even though you are getting truly wireless earbuds for the audio its case they are stored in is just as important. First off, its rubbery matte black style charging case is just under 3ins wide and 1 ½ in tall being super compact and easy to throw in any pocket being barely noticeable. Charges via Type C and has a LED light indicator that will show off white to indicate charging and red if you are almost depleted. Pop open the case and will be presented with a funky neon interior and where to store the earbuds. Using magnets, they pop right back into place. Case holds a total of 10 hours of battery life when fully charged up.

Jaybird uses what they call an EarthProof construction on the Vista which gives you IPX7 water and sweatproof tech but are also crushproof. I haven’t dropped any weights on it, but I’ll take Jaybird’s word on it. Vista have a boxy look to them and use silicone eargels help stay secure within the ear. They are interchangeable and come in three different sizes if needed. I used the out-the-box medium size. Jaybird insignia is branded on each earbud as well as the case. Each earbud gives six hours charged up. You can do a 5 min quick charge which will get you an hour of play.

As far as colors are concerned Jaybird right now has Vista available in Black while other styles Nimbus Gray and Mineral Blue look to being out around the Fall.

Included with the Jaybird Vista and Charging Case is Numbered Secure-Fit Eargels and a USB-C Charging Cable.

Sitting down with Jaybird they mentioned how they incorporated new wireless tech in these headphones called JBS1. This tech basically makes it so each earbud can work independently rather than one being the main and the other being the secondary which has been the case with truly wireless earbuds for years. So, if you want to you can decide to use both or just one. Using one solo you can get up to 32 hrs of battery life if you so desire. They are still of course using Bluetooth and are utilizing BT 5.0. From case to ear they tend to connect immediately with my device (OnePlus 7 Pro). Its very seldom where I had to power one on or resync using the “case in/out method”, but they been pretty clutch.

Jaybird Vista uses clickable buttons on each earbud that respond on Single Press, Double Press and Press & Hold. Commands such as Play/Pause, Next, Google Assistant and even a Custom option if necessary are available. Interestingly enough you cant program each one but they both will do the same command. I did tend to use my phone more often, but they do work and are responsive. Just a force of habit that’s all.

On the audio side, Vista use 6mm milled drivers which give you a nice balance on bass and vocals. No distortion on the highest of volume and if you want to make tweaks over the audio you can. Thanks to Jaybird’s customizable and personal EQ settings you can enjoy your music how you want it. I found my personal EQ has a bit more taste of bass which is great. Jaybird Vista aren’t noise cancelling but they block out a good deal of outside noise thanks to them being snug in the ear. Codec wise they support SBC. It would of been nice to see some other codecs supported as well.

Jaybird’s MySound app is great for presets, customizing the headphones and even getting some recommended playlists for Spotify and other apps. Also shows you how much battery life is left over on each earbud. There is also a “Find my Buds” feature which you can’t use to ping your earbuds but at least tell you where you were last with them.

I used the Jaybird Vista daily on my noisy train commutes, quick runs and comfort wise they are on point. Able to block a decent amount of noise which is good and the fact they have the eargels they never feel like they are going to loosen up and slip out my ears. Catching some shows on Netflix, dialogue synced up evenly with no lag. I did come across a one time occurrence where the audio was too low on the earbuds even cranking up the volume up to max on the phone and I had to go into the settings and change to volume controls on the earbuds and pump it up. I like the ability to use one at a time so I can sometimes have one ear free to hear my surroundings.

Jaybird Vista looks to be some of the best truly wireless earbuds in their price range of $179.99. Giving you a total of 16 hours of total playback and 32 hours if you decide to just rock with one. Has one of the smaller cases on the market and its wireless JBS1 tech helps keep audio synced and rarely running across any hiccups along the way. Sound out the box is good, but I think making your own catered sound profile is excellent. I think Jaybird has found a winner with the Vista and can’t wait till they release the additional colorways to the masses.