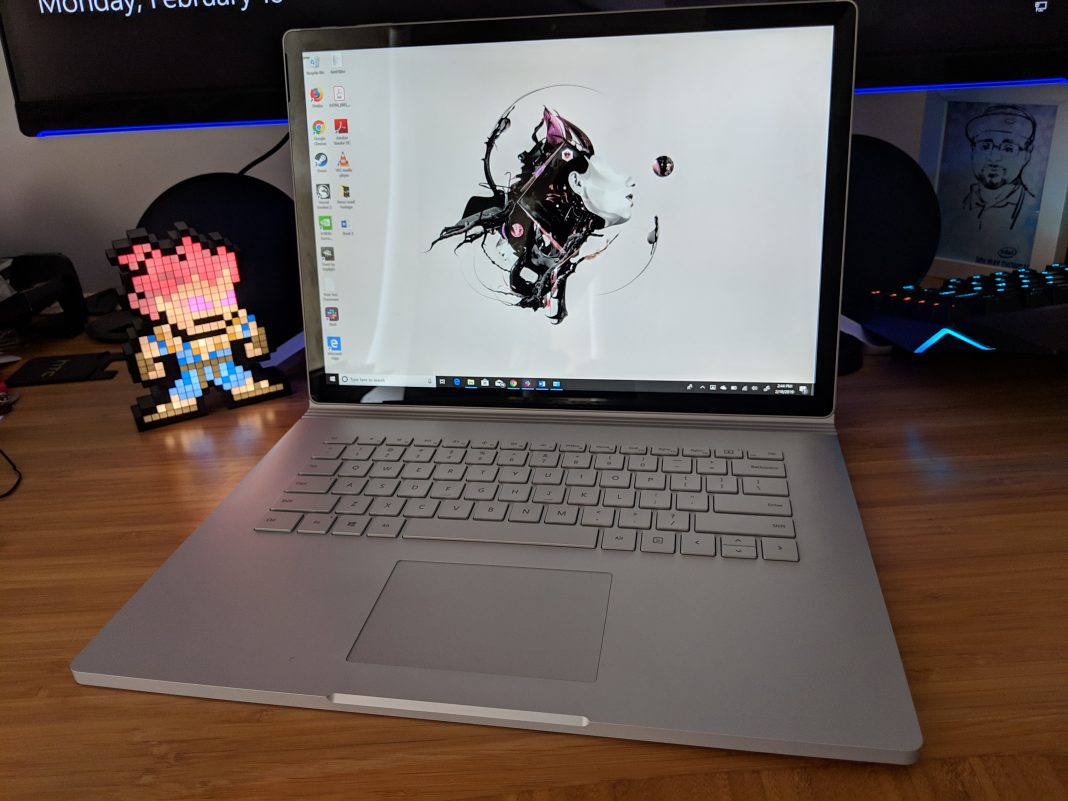 Right off the bat, I been a big fan of the Microsoft’s Surface Pro tablet/laptops for the good part of five years now. Having started on the Pro 3, used the Pro 4 extensively and then moving to the Pro (aka 5) I feel like I grown familiar to the ecosystem and how to use them on the day to day. But since that time Microsoft has also expanded its Surface portfolio to the “Laptop”, “Go” and what I’m going to be covering which is the Surface Book 2. The Book 2 is Microsoft most powerful laptop with creators in mind but is it really the best for your buck?

First unboxing the Surface Book 2 you are introduced to the 15’ PixelSense Display which features a 5MP camera on the front and 8MP on the back both capable of 1080p video. Power and volume rocker on the top with speakers facing forward tuned with Dolby Audio Premium. There is a headphone jack too, but I never used it. Alongside the Surface Book 2 display is of course its Surface Keyboard. Able to be connected and disconnected at the press of a button. Has five points to make sure the display is always secure. A hinge that gives it space between the two parts allowing for breath ability and different viewing angles. Unlike the Surface Pro, the display has no ports and are on the sides of the keyboard. Its equipped with two USB-A ports, 1 USB-C Port, SXDC card reader and its infamous Surface connect port for its own included charger. Funny enough seeing how this Book 2 has a Type C port I used it 99% of the time to charge.

Aesthetically the Surface Book 2 is a grand gray slab of greatness. Its style isn’t too complicated, and I love its simplicity. Folded closed and you get this look that essentially looks like its name given with the binds of a book. Only thing is with this open fold it makes the Book 2 take up more space. This can cause issue putting it in some smaller laptop bag slots as I have come across. But opening it back up and you come across its full QWERTY keyboard with enough space and finger travel that it makes it a dream to type on. Microsoft has always managed to create great keyboards to type on and this is no different. There is a nice amount of space to rest my palms with the glass trackpad square in the middle for easy reach when needed. Some might say the keyboard has too much space but works perfect for me.

Surface Book 2 comes in a variety of configurations ranging from 13.5 or 15’ displays, 8GB or 16GB RAM, Intel Core i5 or i7 processing power and storage starting from 128GB to 1TB. Microsoft was nice enough to send over the i7 which comes with a NVIDIA GeForce GTX 1060 GPU, and 512GB of space. I been using the Surface Book 2 for the past couple months and installed a decent amount of games various forms of media and documents. I manage to almost run through that storage quick though. Book 2 states you can get about 17hrs of battery life on it from a single charge. But that really depends what you are doing. Heavy gaming will vastly deplete it but even then, I got around 6-7hrs. Without I was hovering about the 15+ range. For its battery power and not having to plug up often I was content.

As mentioned, I used the Surface Book 2 as mostly my main laptop for about a couple months coming from the smaller 13’ MateBook X Pro. The size difference is incredible and took some adjusting to especially carrying on my daily on my commutes in and out of the city. Book 2 is a tank though not getting a single scratch or scuffle on it no matter what I put it through. Not having to carry the included Book 2 charger was a relief just relying on Type C for charging. This helped especially when I went to CES last month and only used Type C to charge the Book 2, phones and a drone. With the Book 2 feeling like a full-fledged laptop I enjoyed more of the “lapability” then from say the Surface Pro series.

For my gaming on the go I’d like to coin the Book 2 as a Portable Xbox One. It helped that the Book 2 has an Xbox Wireless Adapter built-in so syncing with the controller never caused any disconnection and was instant.

I did a fair share of gaming on the Book 2 ranging from titles such as the ever popular Fortnite to more GPU hungry titles like Forza Horizon 4. I did try and play Horizon 4 on Ultra max settings which it handled but ultimately would crash after while on 60fps. Turning down some of the settings to Medium provided better results and seamless gaming for longer periods. With the 15’ display and wireless controller I felt like I was home even though I wasn’t. Funny enough playing this and other Xbox Anywhere titles made me wish Xbox would enable the feature on more titles. Using my steam account, I booted up one of my favorite fighters Mortal Kombat X which played and looked good but would occur some lag and this is coming from the full game being downloaded on the Book 2.

For my usual work such as editing and typing the Book 2 gave me no issues in that department and found it one of my favorite laptops to use for work. I did come across a couple of times where I wanted to detach the Book 2 and was getting errors between the display and the keyboard. It was a bit weird as it didn’t happen often, but it was here and there.

It took a bit of time, but I had to warm up to the Surface Book 2 and its 15’ frame. Idk if that’s maybe because its out in the market for a little over a year or I adapted more to 13’ laptops. Using it for productivity is fantastic as its keyboard is one of the best I used on a laptop and it gives you enough space. Its minimalistic design will grab those that don’t want flashy but love a nice clean build. Its equipped with a decent amount of ports which will satisfy most and charges via Type C which is a still a head scratcher why the Pro series still hasn’t grasped this. If you are interested in gaming the Surface Book 2 does good with Xbox One games and some lighter PC titles that aren’t resource hogs.

Now with all this said it really comes down to is the price of the Surface Book 2 worth it? Sure, you can get a 13.5’ that is $1,149 but that only comes with a Core i5 and you can’t get your gaming on like you might want to. The model I been rocking is $2,900 and for that price you can get some tricked out gaming laptops with a ton more power. Surface Book 2 is gorgeous but it’s a costly decision to make.