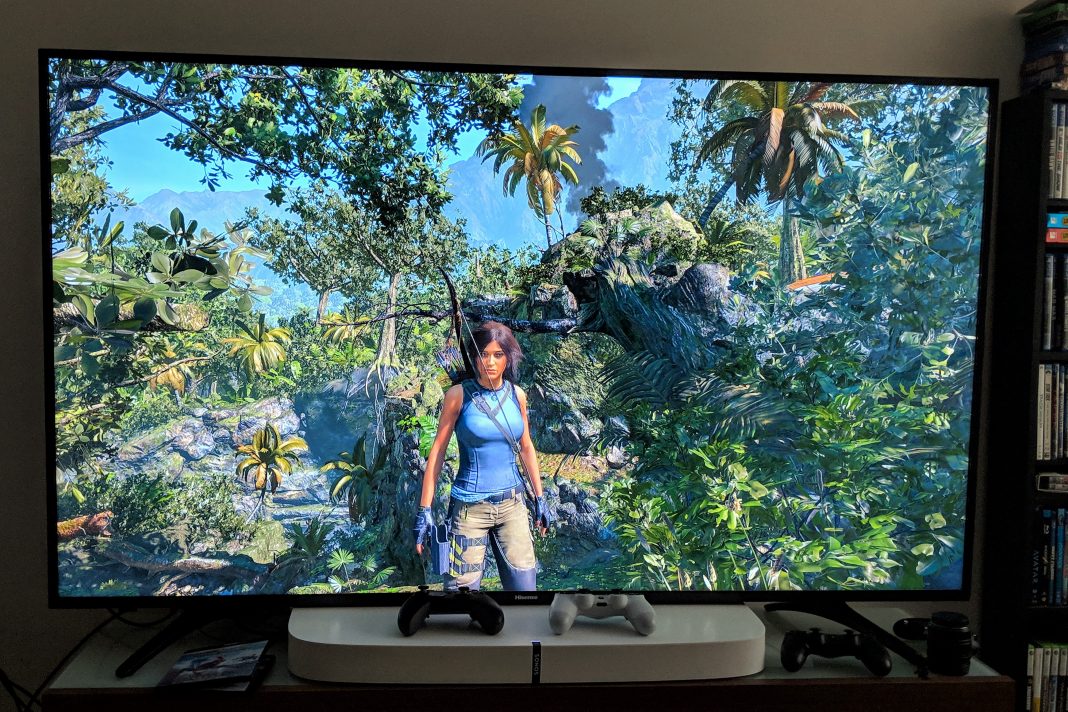 Just like we seen in the mobile industry, there has been a shift of late to these brands that want to give you the bundle of the best tech available at a lower price than some of the bigger names in the industry. We see it with Huawei and one that often comes to mind is OnePlus. Now how does that look on the TV side?
Hisense is a Chinese tech manufacturer that has been in the game for over 40 years but mostly known overseas. They have in the U.S. for a while but mostly been known as value brand. They do though see the importance of television and know that consumers still tend to devour a ton of content from it.
For the past few months we got a chance to out Hisense’s 65-inch LED 4K UHD television model called the H8E. Its feature packed to keep you entertained hours on end but is it worth the price tag?

Taking it out the box you will come to realize this television is a mammoth coming at 65” across. In its place previously was a 55” TV and I right away noticed the difference. But for its size it’s still light coming in a little over 40lbs. Its equipped with 3 HDMI ports, Wi-Fi, Ethernet, USB, and the usual RCA, Optical, and headphone jack ports. I do like that Hisense manage to put all these options in one section. I have used other TVs where they can be times spread out. It is VESA mountable, but I opted for using the included legs. The leg ports are closer to the middle of the TV which worked fine to fit on my stand that barely held my 55 before. I felt the legs should have been slightly easier to get in the TV as you had to give it a bit elbow grease. Besides the curved legs the Hisense isn’t super stylish, but I don’t think its ugly by any means either. Its plastic, but in black with thin bezels to give you a great deal of screen estate.

Once I got the TV setup, I had to get my usual media devices connected to the H8E. Occupying those three HDMI ports is a PS4 Pro, NVIDIA Shield and an Xbox One X with a TiVo Bolt Vox pass thru I use for cable TV viewing purposes. If you use any external devices, which need Bluetooth connection, as wireless headphones for TV, Hisense H8E has it built-in

For your Viewing Pleasure 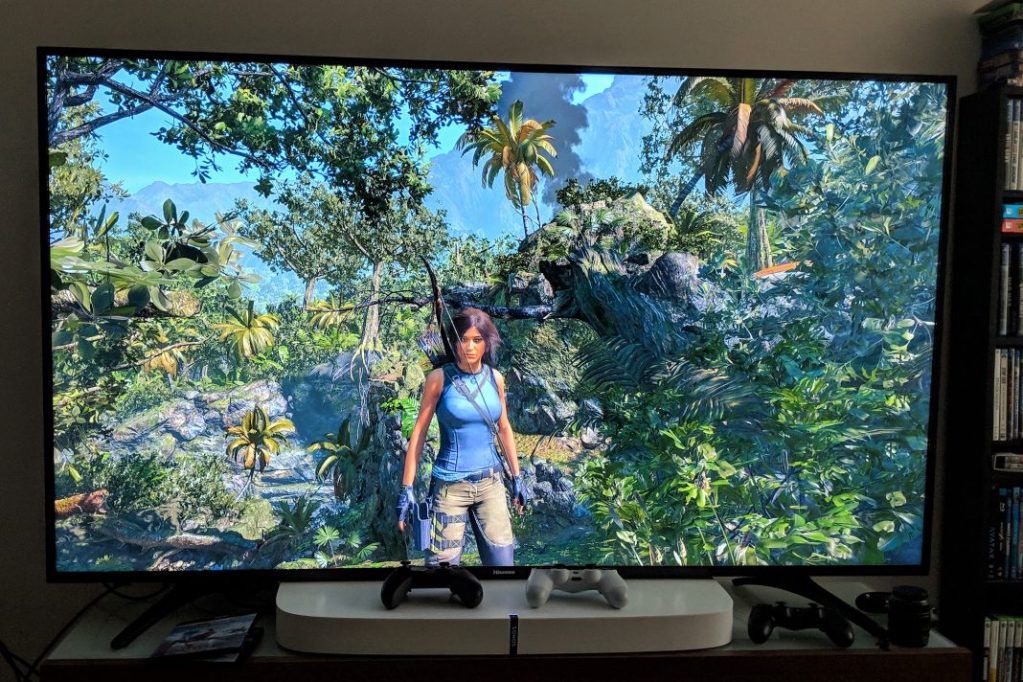 Of course, one of the reasons you are even reading this right now is wanting to know how does this TV look? Hisense has the H8E pumped with so many visual features you will wonder if it’s too good to be true. First off, it’s a 4K HDR setup that supports HDR10, Motion Rate 120 and has Local Dimming. I have done everything from watch cable, stream 1080p/4K content, watch movies on UHD discs, and play hours of video games and the results vary on what you are doing. Cable I don’t really expect much out of since its been a jaded format for years. Streaming content and watching movies looked great and colorful especially when HDR would kick in but you could see there are grainy parts to it. Local dimming does kick in to help on those dark scenes, but it can be noticeable at times. I tend to also watch a great deal of action / sci-fi flicks with intense moving and you can see motion blur at times.

I felt like the H8E shines best playing video games. Spending endless hours playing Spider Man on PS4 Pro or Shadow of the Tomb Raider on Xbox One X you can see how the TV utilizes and supports HDR and colors are vast and vivid. The H8E kept up with all the web slinging around Manhattan and didn’t get any hints of blur or lag whatsoever. Once issue I did come across though is sometimes playing 4K HDR I would get a white line to the bottom right side of the screen. This would only happen when HDR was enabled in games though. If I did just 4K it would never come up.

Also noticing it looks like only HDMI 2/3 support 4K HDR as connecting the PS4 Pro to HDMI 1 I get messages for 2K HDR only and none of my HDR options show up on my games for PS4 or XB1X.

The H8E is bursting with apps ranging with support for YouTube, Amazon Prime Video, Netflix, VUDU and even a great deal of international ones. Interesting enough it also supports IFTTT which opens a few things on your TV. I have it connected to Alexa, so I can give It a few voice commands to change channels, inputs or volume control. One of the better ways of using Alexa with the H8E since the RemoteNow app is non-existent as it doesn’t work on Android or iOS. Booting it on either OS causes it to crash instantly. My colleague can attest to this trying it on their TV as well. 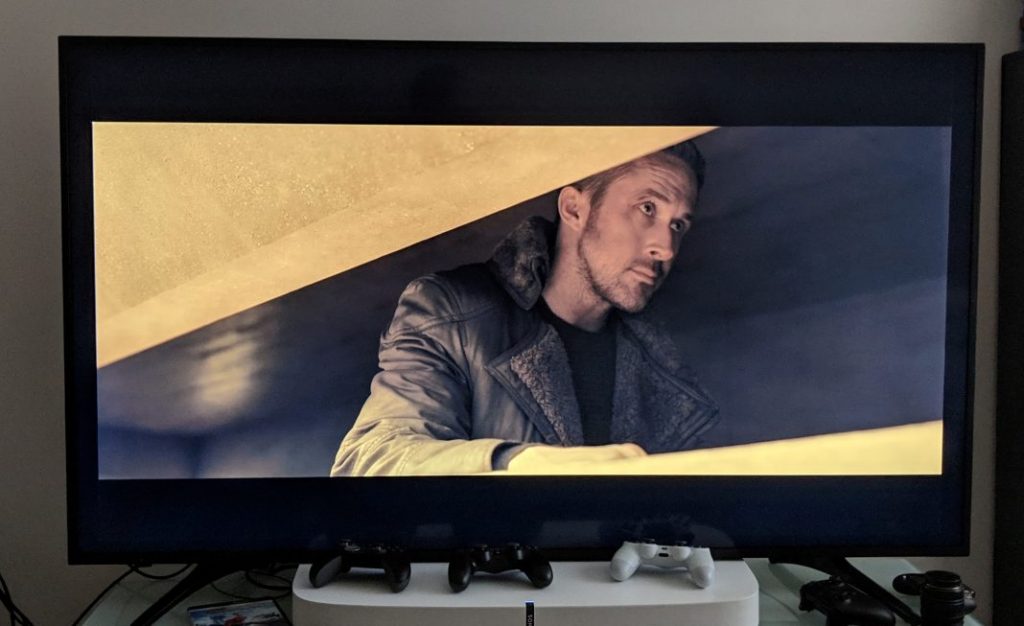 If you are looking for a large starter TV this might be one to keep an eye on. It full of apps, looks great for gaming and supports smart home assistant Alexa. Compromises are you aren’t getting a premium finish and picture quality can be amazing to a bit grainy depending on your content. Also, the motion blur at times can be annoying. But you are also asking for a lot at its relatively low-price tag.