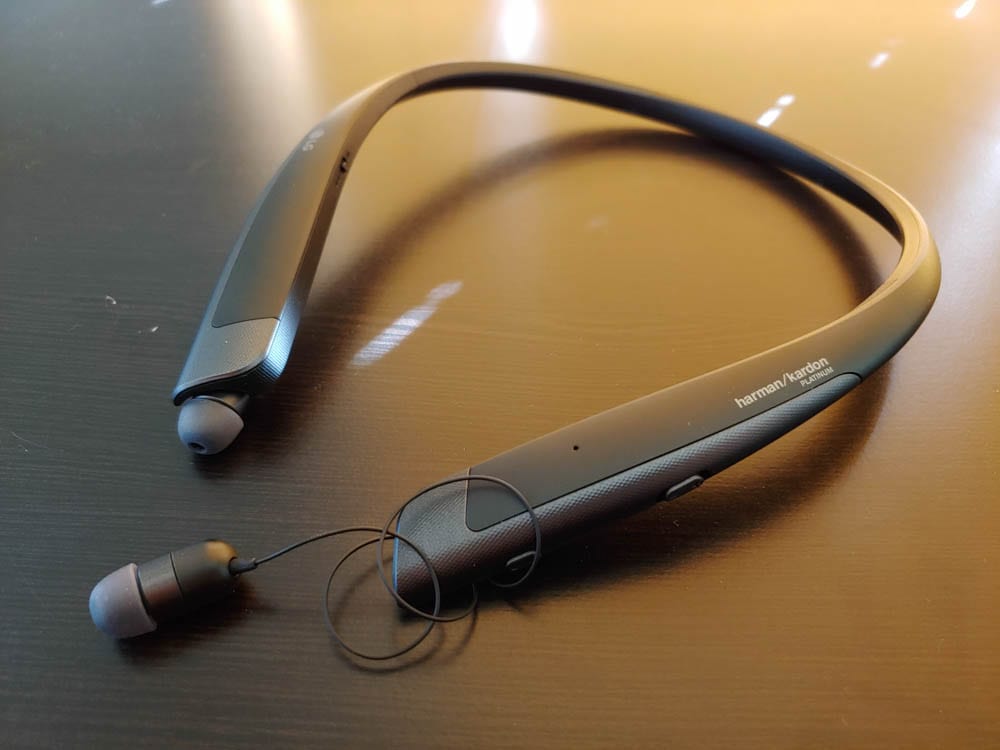 If you happen to be using any of LG’s flagship devices like the LG V30, LG G7 ThinQ, or the new LG V40 ThinQ, you’ll probably want to pair this off with a nice set of wired headphones just to make use of the awesome 32-bit HiFi Quad DAC. If you prefer to go wireless however, why not check out the new LG Tone Platinum SE wireless headset (HBS-1120), now optimized for use with Google Assistant. 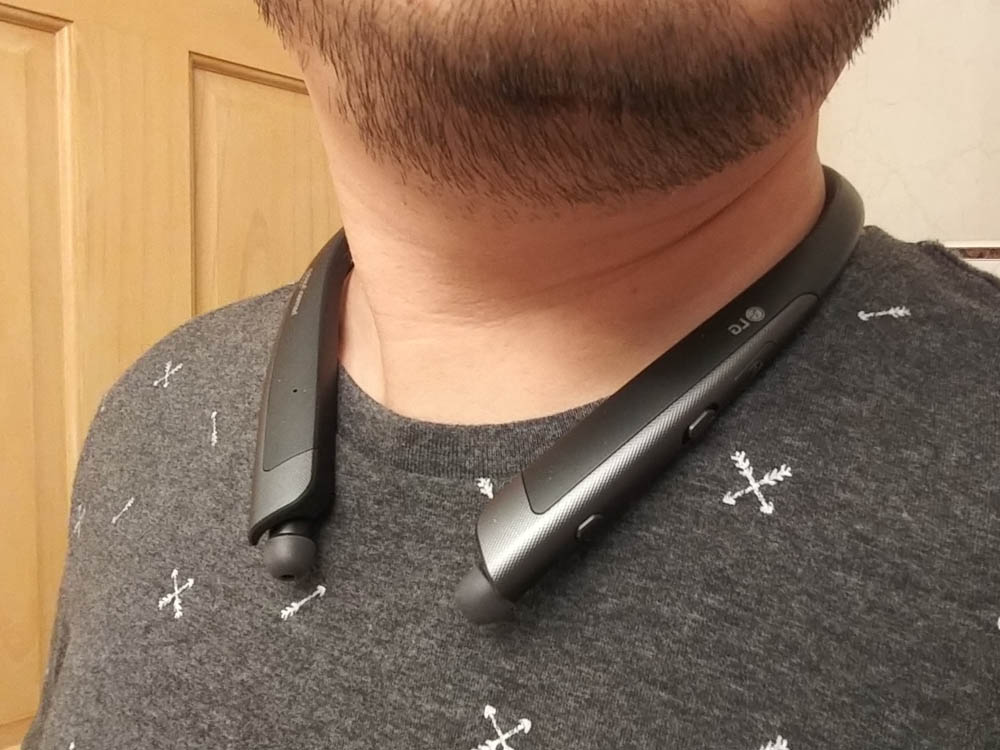 The LG Tone Platinum SE is a neckband style headset meaning that the main unit hangs around your neck. This has it’s advantages over other designs as the headset is more secure in this fashion and you’re less likely to lost them if the earbuds come out of your ears. Also with the neckband design, all of the buttons and controls are in places that are easily accessible and you don’t have to go searching for them on a cable that’s flapping around.

In terms of neckband designs, the LG Tone Platinum SE is very comfortable and nicely weighted. It’s not tight around your neck and kind of hangs loosely, but because of the weighted ends, it stays in place real nicely. On the back of the band is a rubber portion that makes it quite flexible to it should fit pretty much any size neck.

What sets the LG Tone Platinum SE apart from other neckband style headsets I’ve used in the past is that the earbuds are fully retractable. To use, you just pull out the earbuds which are attached to some really thin wires. When you’re done using them, just give them a light tug and they’ll retract back into the neckband.

The LG Tone Platinum SE does have physical buttons for you to control many aspects of what you’re doing without ever touching your smartphone. For instance, it’s got a volume slider where you push down to decrease volume and up to increase. One the other side, there’s another slider that controls song selection for music. Slide it down to go to the previous track and up for the next track. There is a separate button for playing and pausing music which is also used to pick up phone calls. Lastly, there’s a dedicated button just for activation and usage of the Google Assistant. Inside the band is the on and off switch.

Like with most thing on the LG Tone Platinum SE, everything seems to be placed for comfort and ease of use, which is a plus. 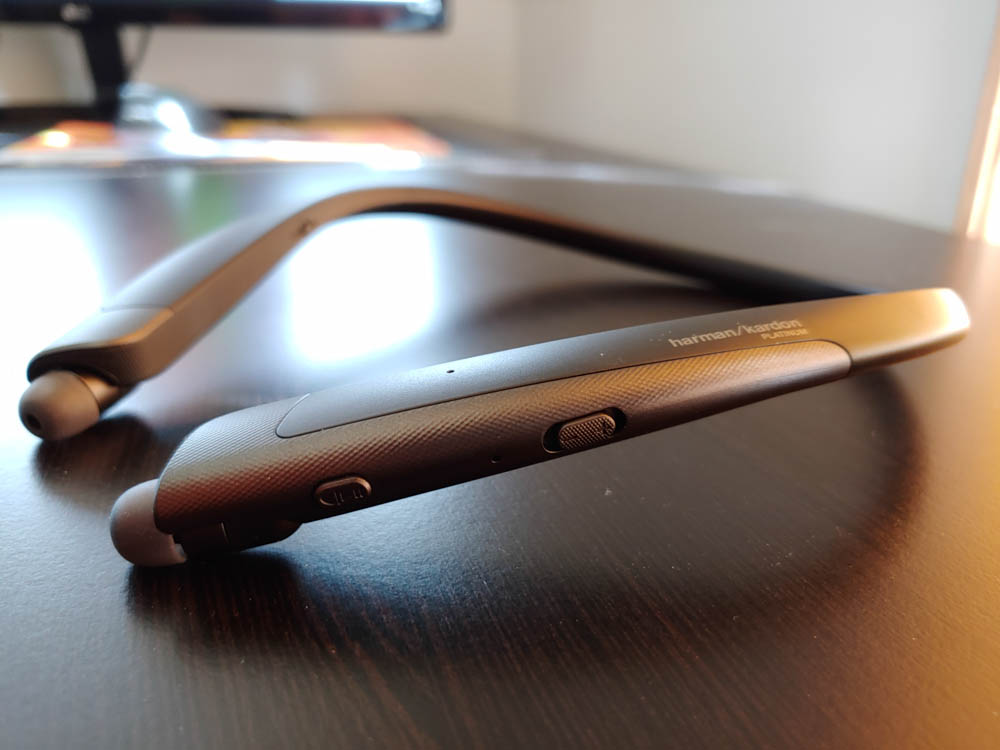 The audio quality is another area where the LG Tone Platinum SE shines. This is probably due to the fact that it features Harman Kardon Platinum Sound tuning, and most of their audio products usually sound really good. On the spec sheet, the LG Tone Platinum SE has a Hybrid Speaker Unit consisting of a balanced armature speaker for crisp treble and a dynamic speaker for bass. I honestly don’t know what that all means, but all I can say is that it does sound pretty good.

Music comes in very loud and clear an it does indeed have crisp, clear highs. The bass also sounds pretty good and gets pretty low, but you don’t get the punchy bass you would normally get with much larger headphones. Still, it sounds great and you won’t be disappointed by any means. 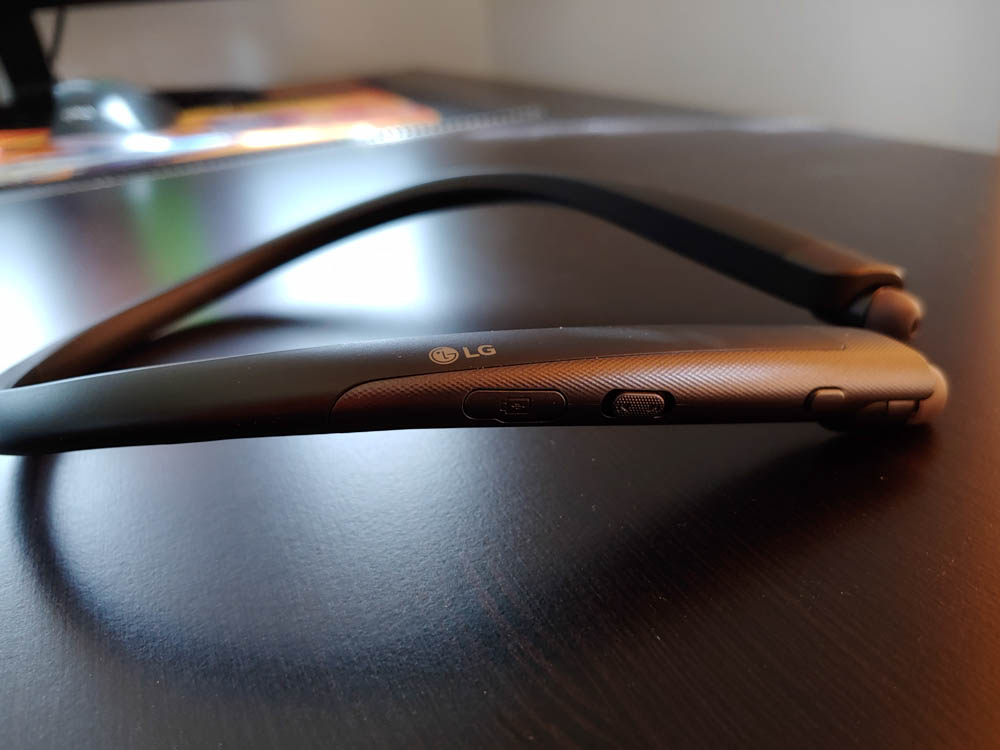 The one really standout feature with the LG Tone Platinum SE is the inclusion of the Google Assistant button. Google has made it now where any third party headset with this bottom can make use of many features not available before.

You can also hold down the button and give Google Assistant commands, like you would do when you say OK Google on your phone.

Lastly, one of the coolest things you can do with the LG Tone Platinum SE thanks to the Google Assistant integration is do real-time language translations using Google Translate. Simply hold down the Assistant button and say something like “Help me speak Spanish.” This will bring up the Google Translate app on your phone. Hold down the button again to say something in English and it will be translated into Spanish and spoken on your phone. Hold down the mic button on your phone and have the other party speak Spanish into it, and you will hear it translated into English on your LG Tone Platinum SE. This is a really neat feature and even though you could do this technically without the headset, it still makes it pretty fun. 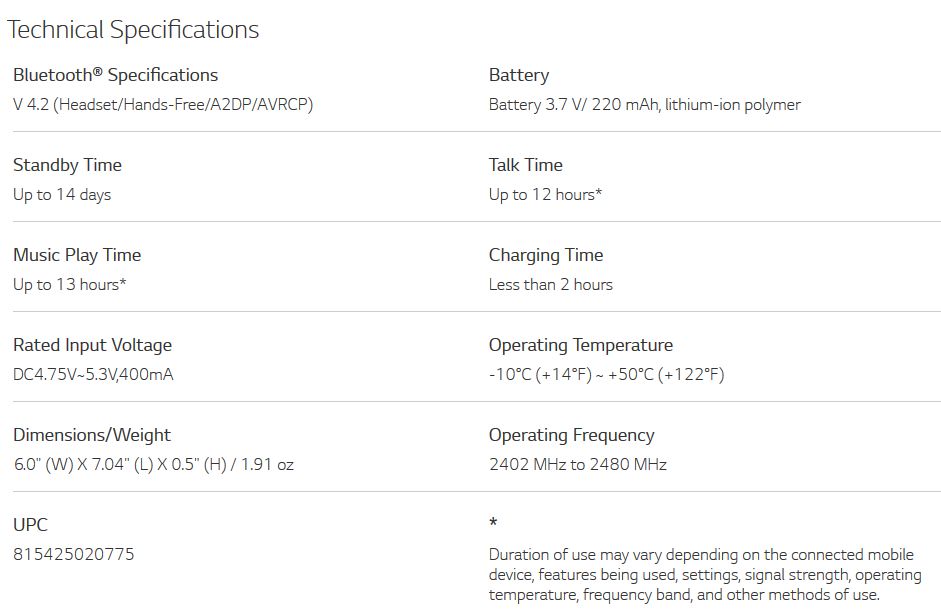 The LG Tone Platinum SE are very good wireless headsets that not only work for LG branded smartphones, but also other Android smartphones as well as with iOS devices. Use of the LG Tone & Talk app will be necessary for extra features and obviously Android with Google Assistant to make the most out of it all.

With that said, the LG Tone Platinum SE is a very good, everyday use headset. It’s very modern looking so it goes well with almost any outfit and it has a lot of features you’d expect from a full featured headset these days. It allows for a lot of hands-free usage so you don’t have to pull your phone out very often which makes it a big plus for those who don’t have time to just stop and look at their devices. There’s even enough battery charge to last at least a full day.