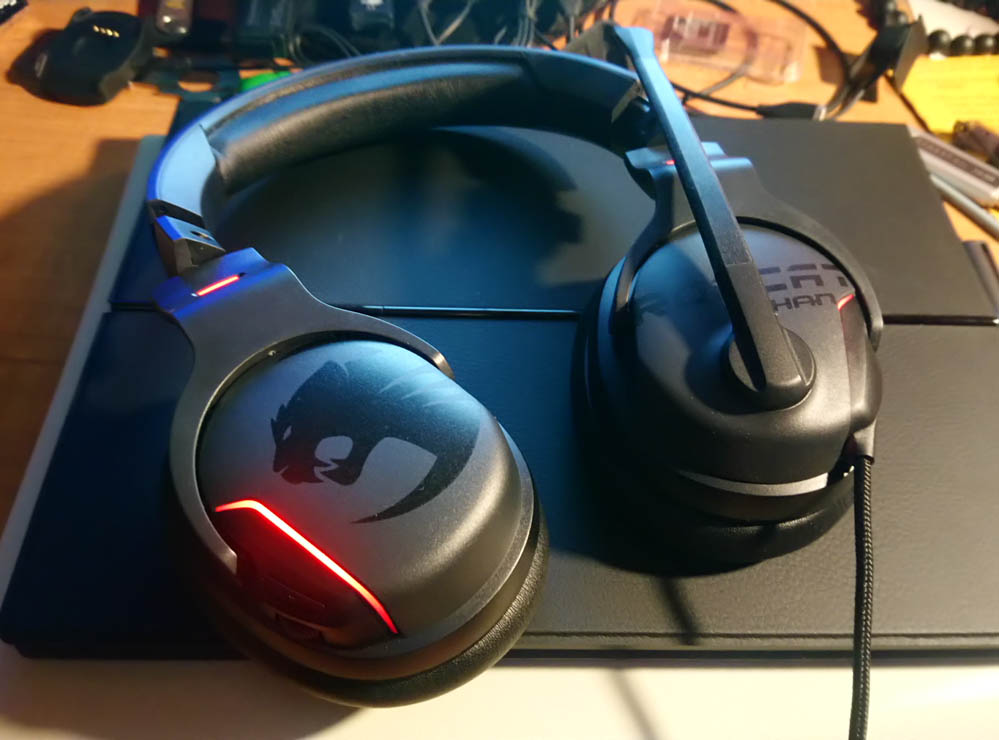 When it comes to gaming peripherals, Roccat isn’t really a name that I’ve heard too much of out in the wild. I mean I know of them and have been using many of their accessories for years now, but I still have a lot of friends out there who have never heard of them. That’s a bit of a shame because they make really good gaming peripherals that are fully customizable and built to last. With that said, the latest Roccat product I’m checking out is the Roccat Khan AIMO. This is similar to the Roccat Khan Pro I reviewed a while back but adds surround sound and Roccat’s AIMO Illumination effects. 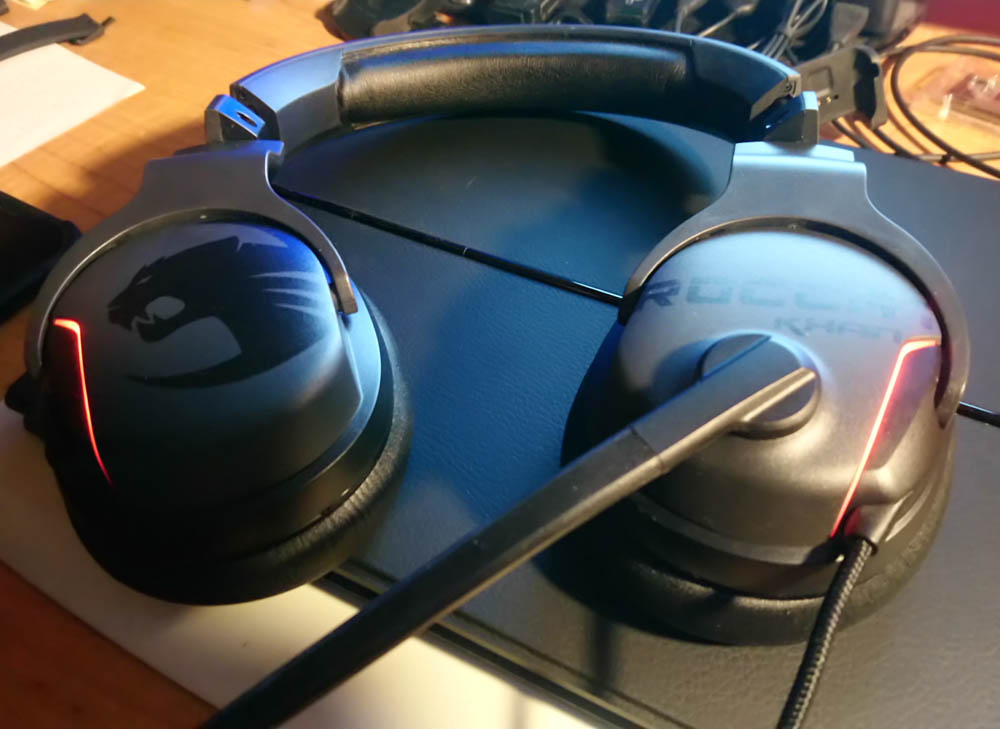 The Roccat Khan AIMO is actually really good looking. I like the fact that Roccat didn’t just recycle the regular Khan design and slap some fancy lighting on it. Instead, this is pretty much a whole new headset.

The majority of the Roccat Khan AIMO is made of plastic, colored in a matte dark grey. There is stainless steel where the sliding extenders are, but that’s about it. Logo are strewn around the headset in black and the whole package as a whole has a really stealth look to it.

The ear pads are made of memory foam and covered in a soft, leather like material. The same goes for the padding that sits on the top band. It’s really comfortable and the ear pads form a nice, tight seal around your ears. Speaking of comfort, the ear portions also swivel in different directions producing the best bit around your ears.

On the left side of the headset is the adjustable mic that flips down into position when you need it. If you need to mute the mic, just flip it back up. It’s a very simple operation that doesn’t require you fumbling around looking for a mute button. There is a button on the headset though and that seems to just turn the surround sound on and off. There’s also a volume wheel which is pretty standard.

Now the main design feature that really sets the Roccat Khan AIMO apart from the Khan Pro is the fact that this thing has Aimo Illumination. It’s really subtle lighting though so it’s not super flashy like on other headsets. The AIMO system does allow for 16.8m colors though so you can pretty much choose any color you can think of to suit your needs.

Lastly, the headset is attached to a rather long braided cable and at the end of that, a fat USB plug. What that means is that you’ll basically only be using this headset on anything with a USB jack, mainly your computer and possibly a gaming console. You won’t however be able to use this on anything with a 3.5mm audio jack, which is kind of a shame because I”d love to use this on my phone if I could. 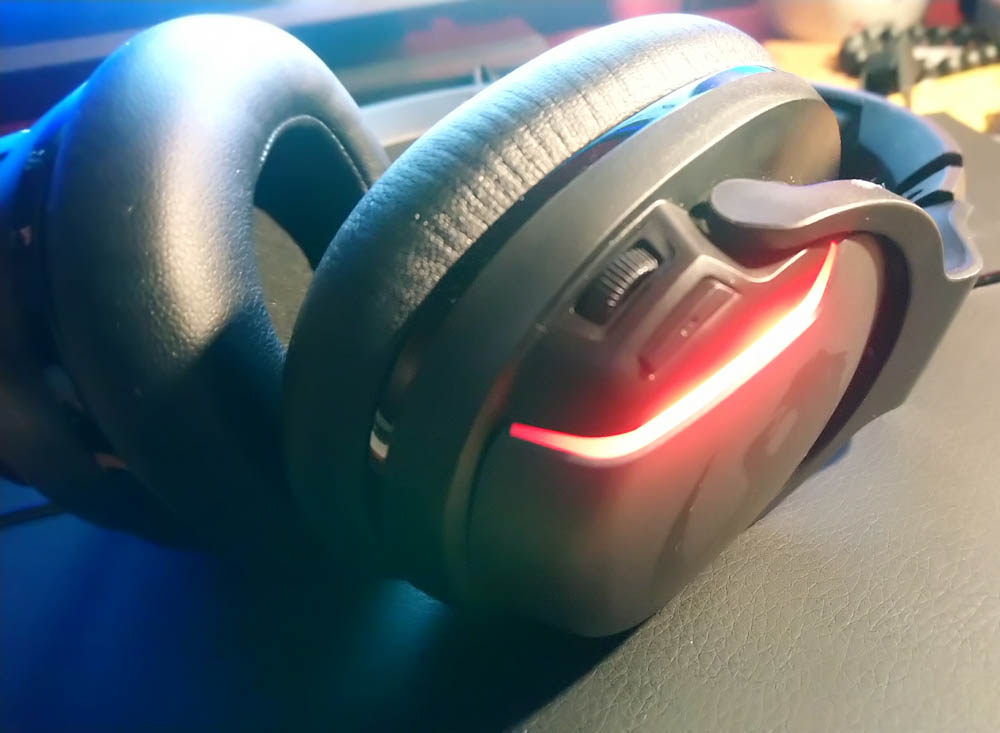 Now to the important part of the review and that’s the sound. Since this is a gaming headset, you want something that outputs clear, crisp audio where you’re able to hear every little detail in the games that you’re playing. Does that Roccat Khan AIMO do that? Yes they do and that’s in part due to the fact that these feature Hi-Res Audio. What that means is that it delivers richer highs, mids & lows so you can pinpoint opponent locations with ease. Its high speed drivers eliminate lag and muddiness.

These aren’t the first Roccat headsets to feature Hi-Res audio however as the Roccat Khan Pro also feature this. The difference here is that the Roccat Khan AIMO also has virtual 7.1 surround sound thanks to it’s built-in high fidelity sound card. What’s cool though is you can enable and disable surround with a push of a button on the headset. It does change the way audio sounds so I’m glad there’s a quick way to change that without having to dig through a settings app.

I’ve stated before that I’m no audiophile so it’s difficult for me to really discern the difference between standard audio and Hi-Res. I can however say that the Roccat Khan AIMO sound very good. These only work on PC so I tried these with some music, games, movies, and everything sounds wonderful with the Khan AIMO. When in a game, you can hear every little tiny detail. That includes sounds you’ve probably never even heard before if you’ve been playing your games through speakers. This is great for FPS games and should give you the edge over other players who are using lesser headsets. 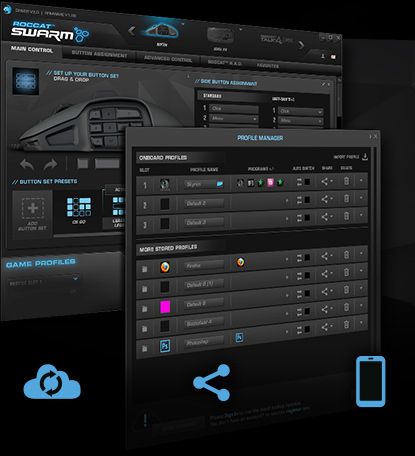 To get the most out of the Roccat Khan AIMO, you’ll need to download the Roccat SWARM app which basically controls every aspect of the Kham AIMO And every other AIMO based product they have. It’s pretty easy to use and through the app is also how you update the firmware on the headset as well. Needless yo say, you’ll want to use it. There’s even a Swarm mobile app that lets you take customization even further. 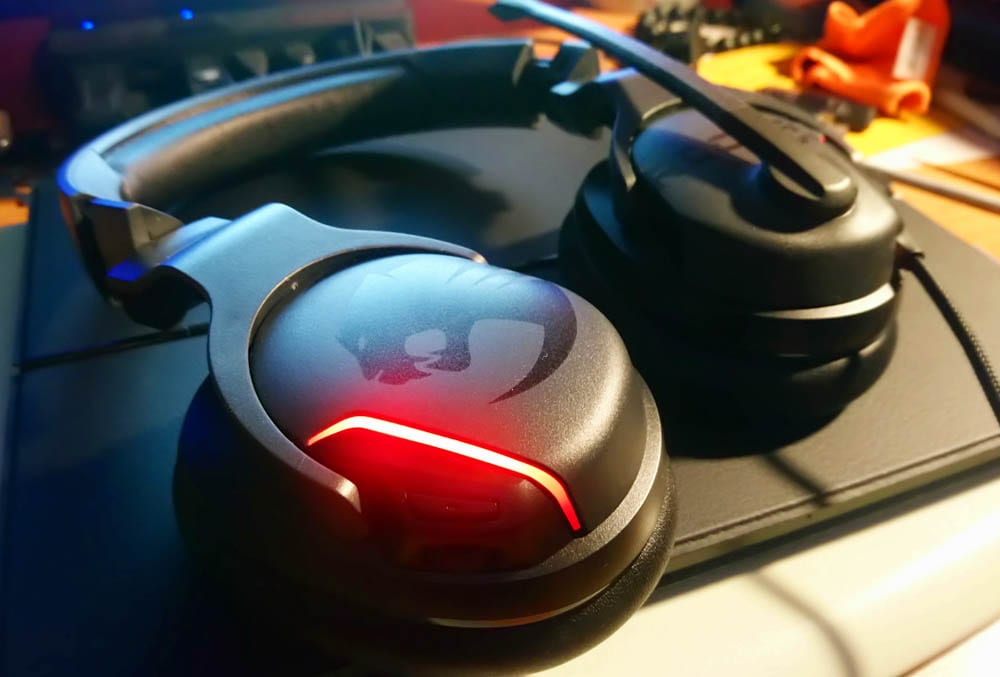 While I would normally rather have a headset that can be used with all different types of devices and platforms, the Roccat Khan AIMO is a very good (for the most part) PC headset. It’s better than the regular Khan for the most part thanks to the addition of surround sound and looks better too because of the lighting effects. While you do lose the ability to use the headset on mobile devices, the addition of these added features more than makes up for it. Plus I have other headsets I can use so it’s really no big deal.

All-in-all, these are probably one of the nicest headsets Roccat has released in a while so if you’re looking for the best from them, I’d consider picking these up.