I been rolling with Western Digital for years using their portable and small hard drives to hold a plethora of files with most of my HDs still kicking. On the smaller size I would use SanDisk flash drives keep other or move other data based on their small size. Since then WD has added SD to their portfolio of companies and we seen some cool and similar interfaces released. One recent product would be the My Passport Wireless SSD. It allows sharing files on the go which I had done with the Sandisk Connect Wireless on a smaller scale. Besides this what else does the Wireless SSD have up its sleeve?

My Passport Wireless SSD isn’t your typical portable solid state drive as you will see at first glance. It is 5in from every angle but to protect its body WD has outfitted it with a Drop protection bumper made out of silicone. Wearing this rubberized jacket your My Passport Wireless SSD will be able to sustain some drops and falls from 1 meter without damaging its exterior and even its insides.

Besides drops its prepared for the various use cases of backing up files. There is a 3.0 SD Card reader, micro USB 3.0 port and your usual 2.0 USB port available. There is also indicator lights to advise you when its powered on by pressing the accompanied button or even a battery button to let you know how much juice you have left. I’m surprised Western Digital didnt just opt for a 3.0 USB port and i wish they could of fit a Type C connection somewhere on it.

Even though the Wireless SSD is slated to be a portable and durable solid state drive it even has some other tricks up it its sleeve. It can last for ten hours on one battery and on that same battery you can change your own personal devices thanks to its built in 6,700mAh power bank. It gives you 1.5A or 0.9 when already in use. WD is trying to be your one stop for everything and it definitely helps.

Going back to that battery button mentioned earlier it can be doubled as a One Touch Copy for card readers, SD cards and other storage drives if necessary. 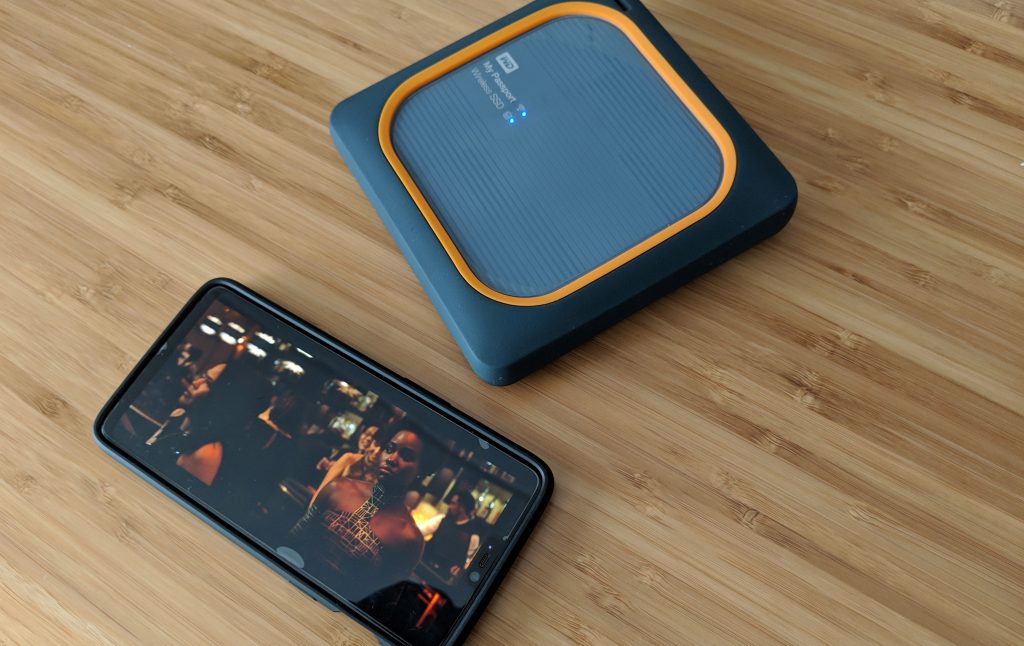 Now one of the main features of the My Passport Wireless SSD is of course wireless. WD has given this storage drive the ability to create its own 802.11ac network which allows devices to connect to it via the My Cloud app. You can see what files are available and have the ability to stream video content up to 4K. When playing a video it will load up and give you the opportunity to use whatever video player you have at hand like say VLC. Now it doesn’t say how many devices you can use with it but I imagine that goes with how much bandwidth is being used and files. I had streamed a copy of Black Panther in HD which was roughly 3GB to a OnePlus 6 and BlackBerry Key2 at the same time without issue.

Within the MyCloud app you can access additional cloud services if needed and share on the My Passport. It’s not ideal though and better off using those apps on your smartphone or PC if needed. It’s not the fastest and I could only see if you wanted to copy a file which still takes a bit.

I find the My Passport Wireless SSD to be a great travel companion with it being a solid state drive and throwing in a backpack without worrying of it getting damaged from a rough commute. The amount of ports is fantastic and will fit any scenario but wish they had updated the USB port to 3.0 and maybe added Type C as its becoming the new standard. Sharing wise it’s perfect for a group for folks who can get everything from documents to video content without having to plug up to anything.