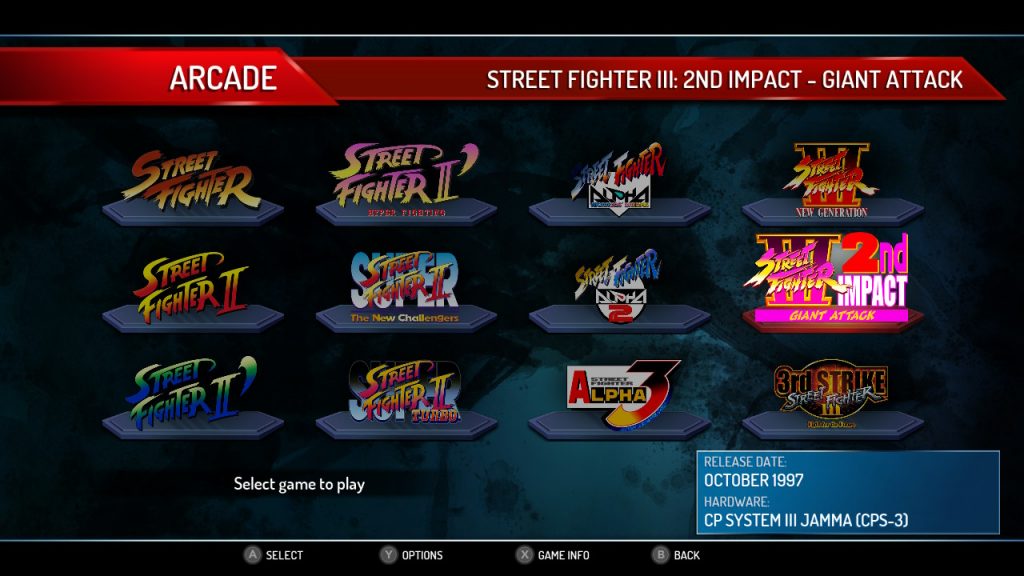 One of the things we been seeing with the Nintendo Switch is port overs and remasters of classic games throughout the past year since the launch of the Switch. Nintendo seems to be more so doing this than via the Virtual Consoles of systems past. A particular franchise I was happy to see translate over to the Switch was the Street Fighter series. While there was the Ultra SF2 release last year this one caught my eye. Is Capcom’s latest title worthy of a Switch purchase? 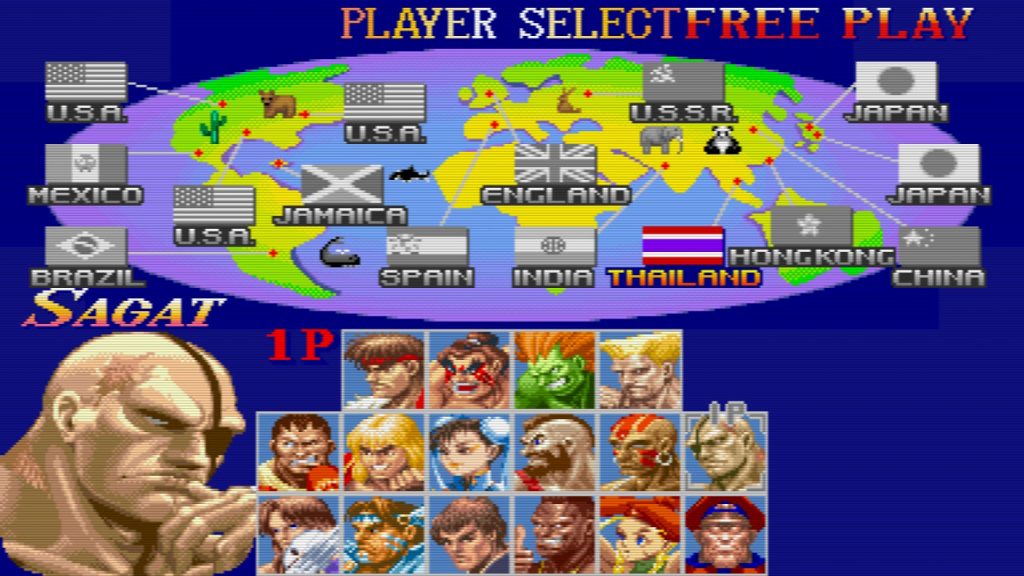 When starting up the 30th anniversary you can hop in various modes such as Offline, Local Play, Online Play and if you are feeling nostalgic you jump into the Museum. I took a tour of the Museum and it has everything from a timeline of every SF game created, breakdown of the characters and some behind the scenes development of the series included in this collection.

Offline mode gives you the ability to play any of the titles via the CPU or against someone if you like. There is training as well but its only available on four titles in the series. There is local play which allows you to link up with other folks that have a Switch nearby which I wasn’t able to test out and of course Online Play. With Online Play you can only battle via four titles such as SFII:HF, SFII:T, SFA3, and SFIII:3S. 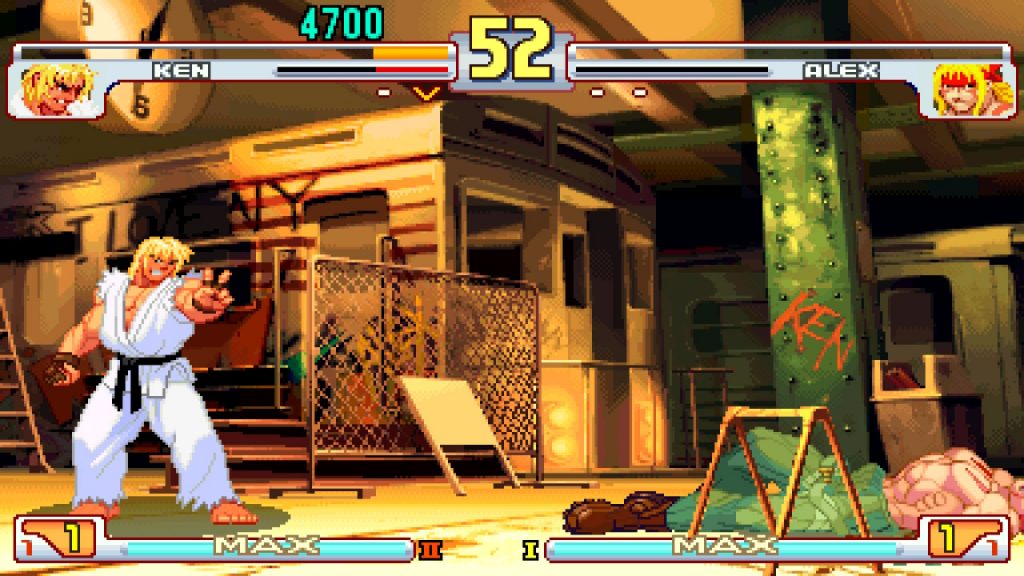 Portability makes SF 30th anniversary collection a plus right off the bat since you can take your Switch anywhere and do battling on the go. The day I got the game I was at an event and booted it up and played a couple quick battles with friends via the joycons. Yes you can use the joycons but it’s definitely not ideal. Joycon sticks with this game are destined to get destroyed them at some point. Moves are responsive to the touch though and graphics look great on the Switch screen. You can change the screen orientation and filter it a bit as well. I tend to play with the widescreen version that takes up the whole screen 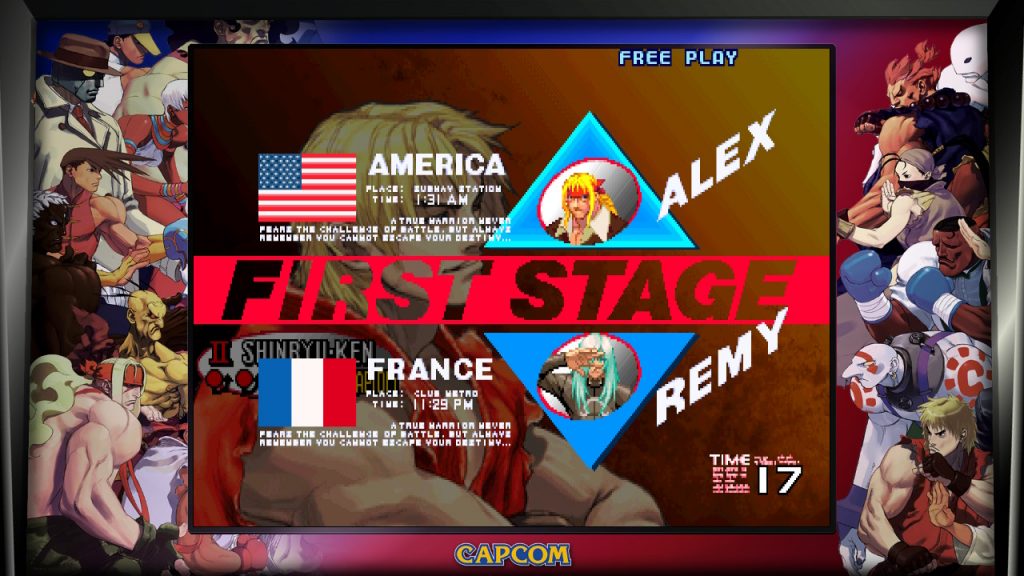 Capcom has made getting in and out of games mostly instant. There is realistically no load times and allows for some quick intense battles. Save game progress can easily be accessed while pausing the game. You can always put your Switch to sleep and hope right back into a battle at anytime. Also your button configuration seems to carry over no matter which title you play so you don’t have to change it each title you play.

Playing online has been hit or miss depending on connections with some being pretty laggy the times I tried it. I know you can mess around with the latency but I hope Capcom can do some stuff on the backend. As I mentioned earlier using Joycons to play this game even by yourself is insane. Unfortunately the Switch D-Pad if you can even call it that is atrocious and you might have to opt for a Nintendo Switch Pro controller or even 3rd party ones to finally enjoy this title. Mind you I have done Raging Demons and so forth but it’s just not as smooth as doing it on say a PS or even XBOX controller.

Feel like opportunities were missed to include some modes that were included in SFA2 such as the 2 vs 1 Bison mode and one of my favorite modes of any SF game “World Tour” mode that was in SFA3 which allowed you to customize and build a character.

I would have liked to see Capcom include some of the forgotten titles such as Street Fighter EX and even some of the crossovers like X-Men vs Street Fighter or SNK vs Capcom. Hopefully this does good enough where we will get another collection involving those titles. Funny thing too is the console versions have SF4 as a pre-order bonus while the Switch gets another SF2 version.

Feel like opportunities were missed to include some modes that were included in SFA2 such as the 2 vs 1 Bison mode and one of my favorite modes of any SF game “World Tour” mode that was in SFA3 which allowed you to customize and build a character.

If you are a fighting game fan and are very dedicated to the Street Fighter franchise then this collection might be for you. While there are 12 iterations of SF on here you will most likely play four to five given the fact you can only play four of the titles online anyway. Graphically they are arcade perfect and move fluidly to accompany that. The main issue though is the joycons and will most likely rely on you getting optional controllers with actual D-Pads if you want to get the full value out of this game. Of course is the console versions but defeats the “on the go” purpose. For $40 it’s a worthy Switch title to have in your collection and will lead to a ton of bragging rights.