It destined to happen every year and we are always comparing which one stands out more. Is it the G series from LG or the S series from Samsung? They have beefed it up in the specs department with each device bringing something the other doesn’t have. Which features catch your eye.. and your wallet? 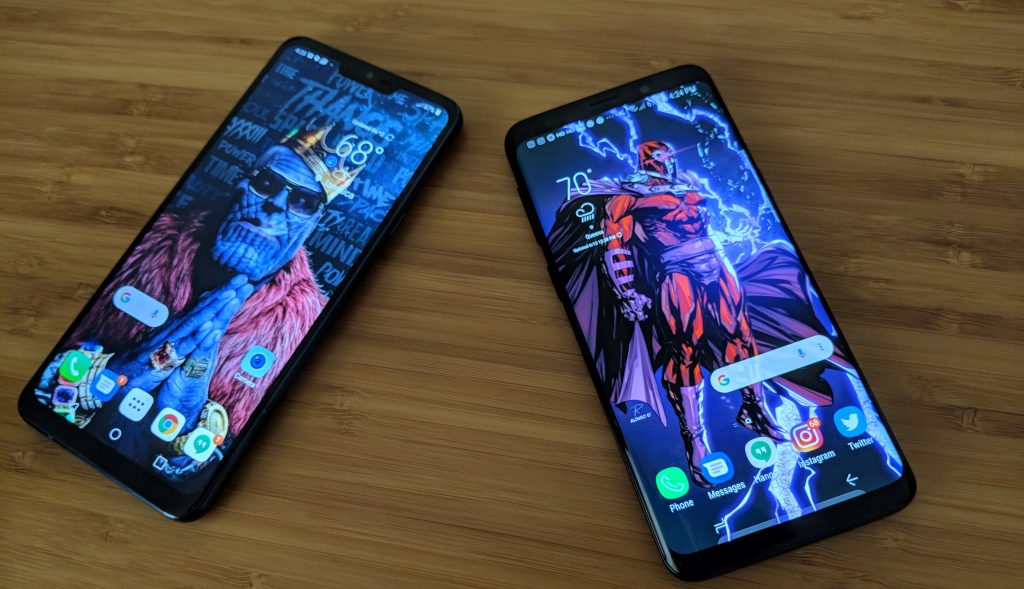 Interestingly with the LG G7 being the larger device it’s actually lighter than the Galaxy S9. The G7 comes in at 162g while the S9 hits 163g and if you count the S9+ that’s even more at 189g. Design wise they both have Type C ports, headphone jacks and dedicated buttons for assistants such as Bixby or Google. Fingerprint sensors on the back of both which respond pretty prompt to unlocking the devices.

Under the hood they are pretty similar in the specs department with both rocking Qualcomm Snapdragon 845 processors, Adreno 630 GPUs, 3000mAh (S9+has 3,500) and 4GB RAM(S9+ has 6GB). Newer chipsets are supposed to help the batteries last longer even if they are smaller. I manage to put some strenuous work on them but luckily both devices handle quick charging pretty stellar and both have wireless charging as an option as well. They both are water-resistant with a rated IP68 and Corning Glass 5 for scratch resistant. 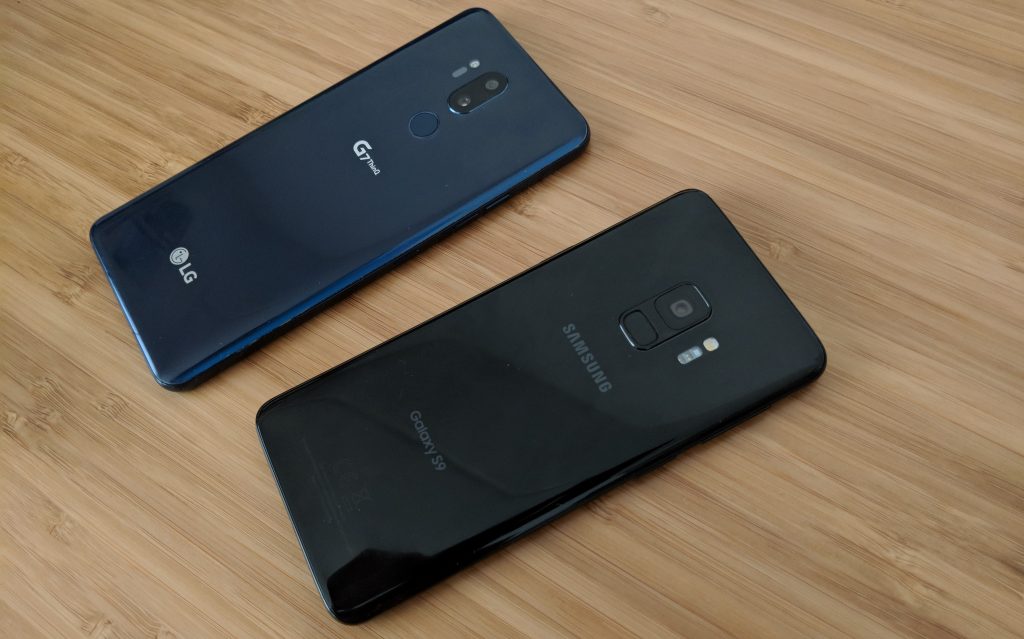 The biggest differences would have to be in the displays. Samsung continues with their usual SUPER AMOLED display which curves from side to side and LG is using IPS LCD and has a notch at the top. Now definitely what your tastes in views will vary. I feel like the LG G7 has a big more of accuracy with color and looks clean when reading pages or looking at photos but the S9 just pops with colors that are vivid but can also be saturated. For pictures and reading I preferred the LG G7 and the Galaxy S9 I preferred for media consumption. LG does have a display brightness feature which can be boosted and made brighter for outside usage giving you about a 1000 nits.

One last thing is they also vary in the audio department. Samsung has teamed up with Dolby while LG has partnered with DTS X. Both sound good but Samsung seems to possibly have slightly better clarity while LG is louder thanks to its resonance chamber. You can feel sound pumping out when you hold it in hand. Also LG put a Quad DAC inside the G7 which can assist with better audio listening quality with the right equipment.

Both are running Android 8.0(Oreo) with Samsung using TouchWiz OS and LG using LG UX. Each has their quirks and comes down which you are more a fan of. TouchWiz has been redefined over the years and has tons of bells and whistles hidden inside of it. LG’s UX feels closer to stock android with some touch ups in certain areas. The G7 and S9 has various ways to unlock ranging from codes, fingerprint sensors and also facial unlocks and each does it pretty swift.

The camera department is where they vastly change. The LG G7 has dual 16MP cameras while the S9 has a 12MP lens and the S9+ has dual 12MP sensors. Both are able to take great photos but each has some interesting features. LG has vastly improved on their wide-angle lens tech and makes alternating from normal to wide instant. Wide angle isn’t always used but it’s great for when you need to get everything in one shot without flipping your phone horizontal and even backing up some. Also the G7 has a AI mode that recognizes what’s being captured and adjusts to that environment or product.

Samsung’s lenses do some of the best photos in low light and they have some features such as super slow mo. Super Slow Mo is nice if you can get the correct lighting to accompany it. Other features like portrait mode and shooting in 4K UHD is available on both devices. Front facing wise you are getting 8MP for selfies and either one is aquadate for that.

Each takes great photos and it really comes down to whether you like shooting photos in darker areas or getting a better wider view on things.

Both are stellar devices and comes down to a few things. How do you plan to take your photos and which display better suits you. Also while I think the Samsung speakers sound better with Dolby I do like that LG has audiophiles in mind with its dedicated built-in Quad DAC and also various audio codecs it supports.

At the moment pricing for the LG G7 is $750 across major carriers while the S9 sits at $719 and the S9+ is a whopping $839. Of course search around and you might be able to find some deals to lower the price or sweeten the deal per say. Samsung gives the option on unlocked while LG is prepping to give that option next month.