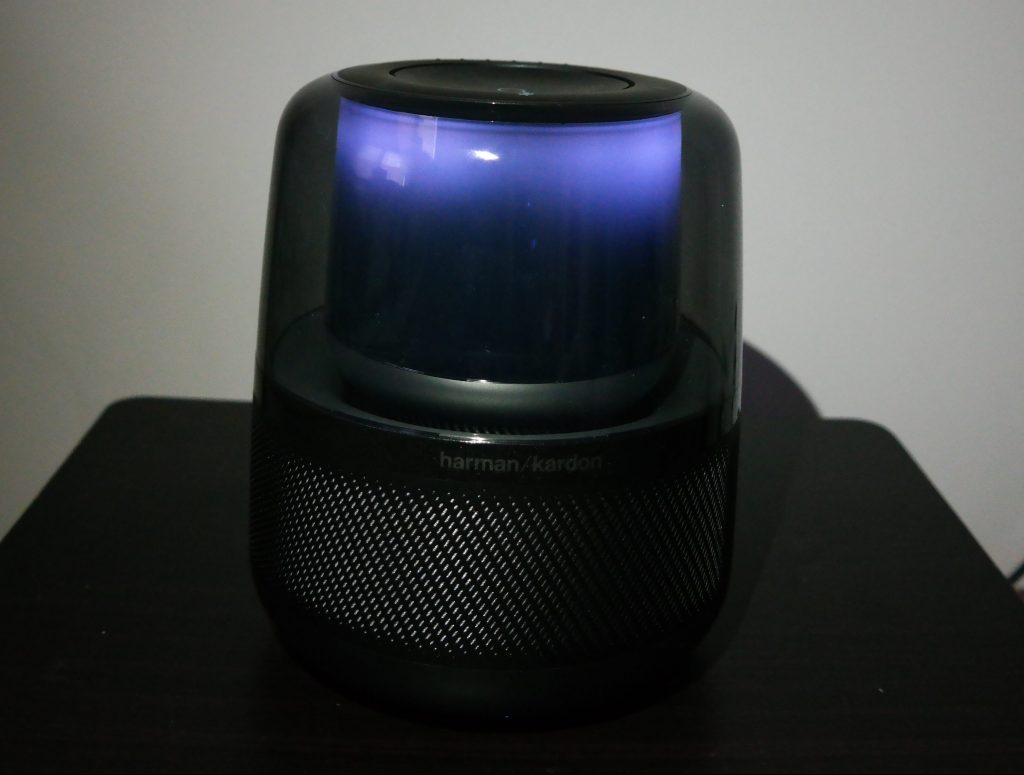 As I had mentioned in my Echo Spot review last week, Alexa has been out for quite a few years now and in that timeframe Amazon was released a slew of their Echo devices. With them being under the Amazon umbrella so to speak you are getting the best support from them. One thing you aren’t getting the best though is audio quality. Of course you connect a speaker to a Dot but what if you want one device that does it all. Harman Kardon hopes to alleviate some of that with its Allure speaker with Alexa built-in. You can pretty much ask it to do everything you would your Echo speakers and get some lights to go along with it. But does it work as good?

Taking the Harman Kardon Allure out the box can be quite a feat with it weighting in a little over 7lbs. Once you get past that you will be drawn to its unique cylinder style design. This has to do with it being a 360 degree speaker meaning no matter which way you are facing the same audio quality and lighting effect will be presented. Some aren’t big fans of the design but I found it different and well I like things that stand out. It has touch sensitive buttons on the top for muting the mic and volume controls. You can either run your finger around the half circle or tap the controls. Tapping in the center will pause and play. On the back is a bluetooth sync button which I felt not to be very responsive and had to mess around with it to get it working. Other than that it has a port to plug the included power plug. Unfortunately there isn’t an aux jack if you wanted to hard wire anything else to it. Not a deal breaker but some may be interested in it. 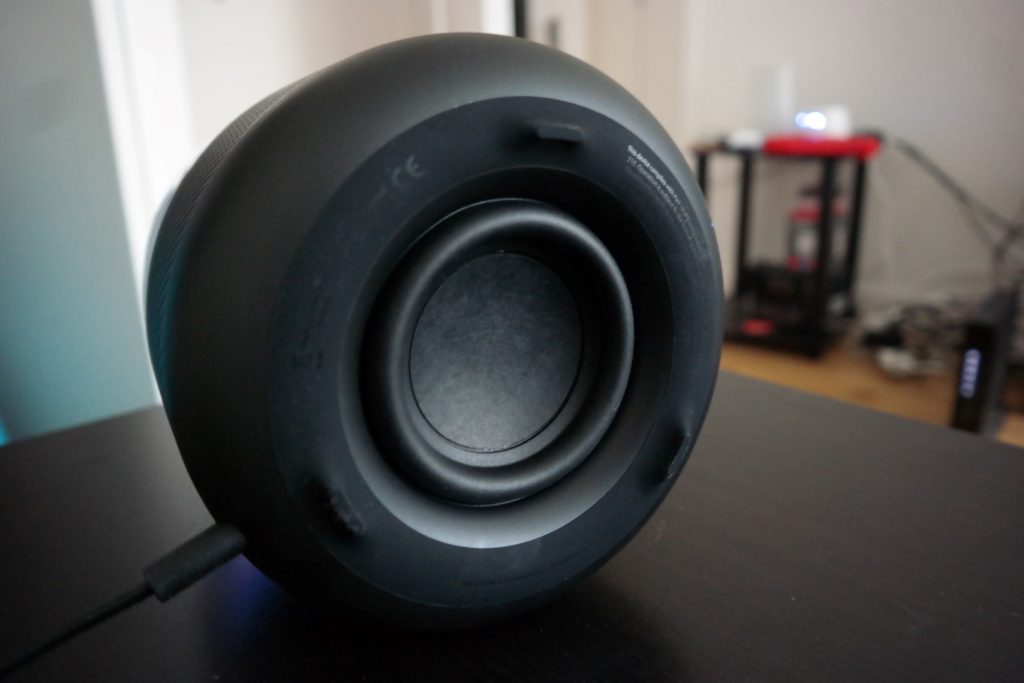 Allure has a few 1.5” midrange tweeters to help pump out the sounds through the mesh speaker grill in various directions so you get that 360 feel while there is a 3.5” subwoofer which is right underneath and you can actually see and feel if you lift up the speaker. There is also four mics equipped so Alexa can hear you anywhere and over music if necessary. Also can’t forget about that flashing blue light but i’ll get more into that later.

Usually with Echo speakers you would setup within the Alexa app or in the case of the Echo Spot or View via its display. With the Allure you will have to download the HK Alexa setup app and walk thru the steps of setting it up with your network and also setting up bluetooth. It’s not a hard task by any means. Once this is done you can pull up the Alexa app if you have it already and some of your Alexa tweaks. 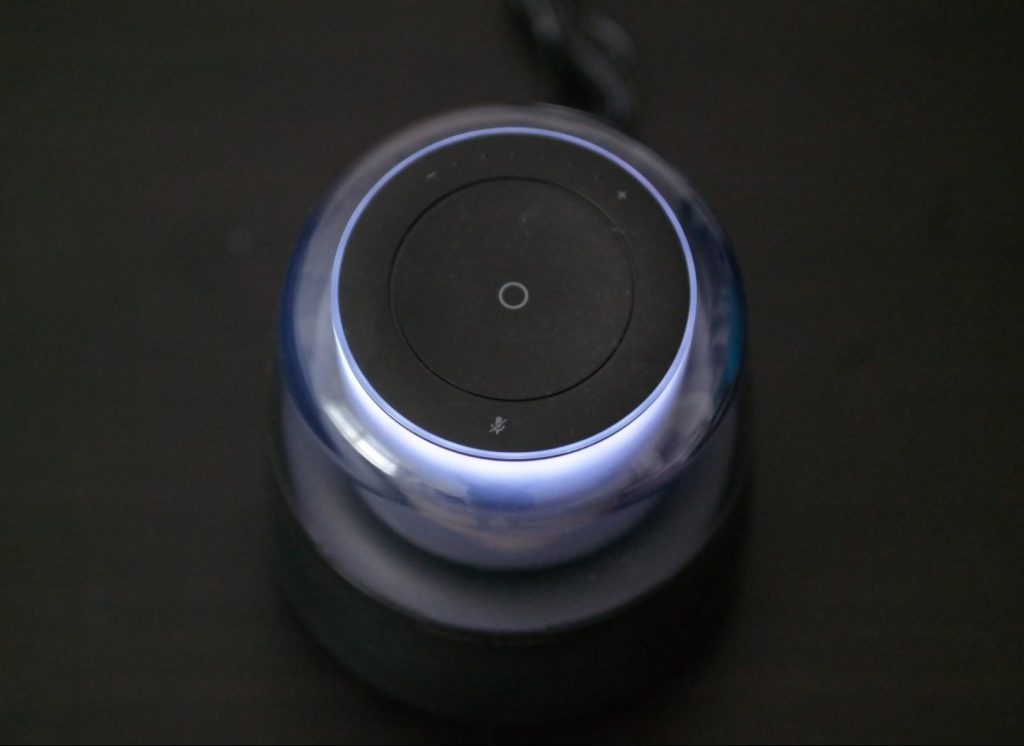 For about the past month or so I been using the HK Allure and there are things I favor it for and those that have become increasingly annoying. Sound wise compared to any of the Echo speakers on the market it trumps them in that aspect for sure. Sound is stellar as you get a nice clean sound and some thumping bass. Playing it at high volumes you don’t seem to get any distortion either. Asking Alexa to play things such as CNN news briefings or asking to play certain artists via Spotify wasn’t much issues. It always plays nice with Amazon, iHeartRadio, TuneIn and Pandora.

The mics work rather nice on the Allure as I can talk at regular or low voice across the room and Alexa can still hear me thanks to its far field voice recognition. But that’s also where a big problem lies as the Allure doesn’t support ESP aka Echo Spatial Perception. I can be in the kitchen talking to the Echo Spot and the Allure will also hear the same command and play at the same time. At times I’d have to mute one or the other unfortunately. The light on the Allure doesn’t do much either but light up in the same pattern over and over. If you are looking for something like say the JBL Pulse which goes with the beat you will be disappointed. If you don’t care for the lighting you can turn it off via the app.

At a pricing of $249, Harman Kardon Allure places itself well above the price ranges of Amazon’s Echo speakers but it also sounds better in the process. It can get pretty loud and without distortion. Allure is responsive and can pick up voices far away but doesn’t play nice if you have other Alexa-enabled speakers in the home unless you mute them. Only thing that might deter you from the Allure is its huge thick peculiar design which Harman has been known for stepping out the box on their portfolio of speakers whether wired or wireless.