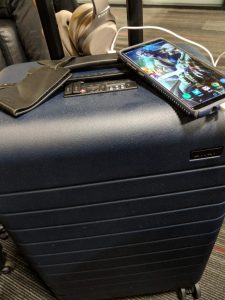 So every January i take my annual trip to Las Vegas to attend CES. Just one of the biggest conferences to start off the year and this is I believe my eighth year going. Funny enough my setup has always been more of a two hit combo. I’d have this RL Polo weekender type bag and essentially a duffel bag to check in. Its worked for me for years but it’s a mess keeping organized and also lugging around in each arm as there is no wheels.

I spoke to the good folks at AWAY to try out one of their bags for my week-long CES trip and see if I been missing out all this time.

AWAY comes in a wide variety of colors and I opted for the dark navy blue colorway. Also they come in for four styles going from smallest to biggest. I chose their “Bigger Carry-On” which is larger than the “Carry-On” but smaller than “Medium”. The bags are made out of Makrolon polycarbonate which is essentially plastic that is durable and flexible. AWAY bags are catered to be stretched out and stuffed a bit and go back into place when done.

On the exterior there is the handle that when pulls up reveals the otherwise concealed battery pack. They utilize 10,000mAh removable batteries which can be popped out with a quick press and pushed back in with ease. Previously AWAY had the batteries built-in but its great they went to a removable format as airlines are now banning “smart luggage” or non-lithium batteries on flights. Also on the outside is a combo lock for securing your belongings. Now some are saying this is a carry-on and will be with you at all times but you never know what you can come across. They are times flights are full and carry-ons have to be checked in which I was always against but this might alleviate some of that stress. 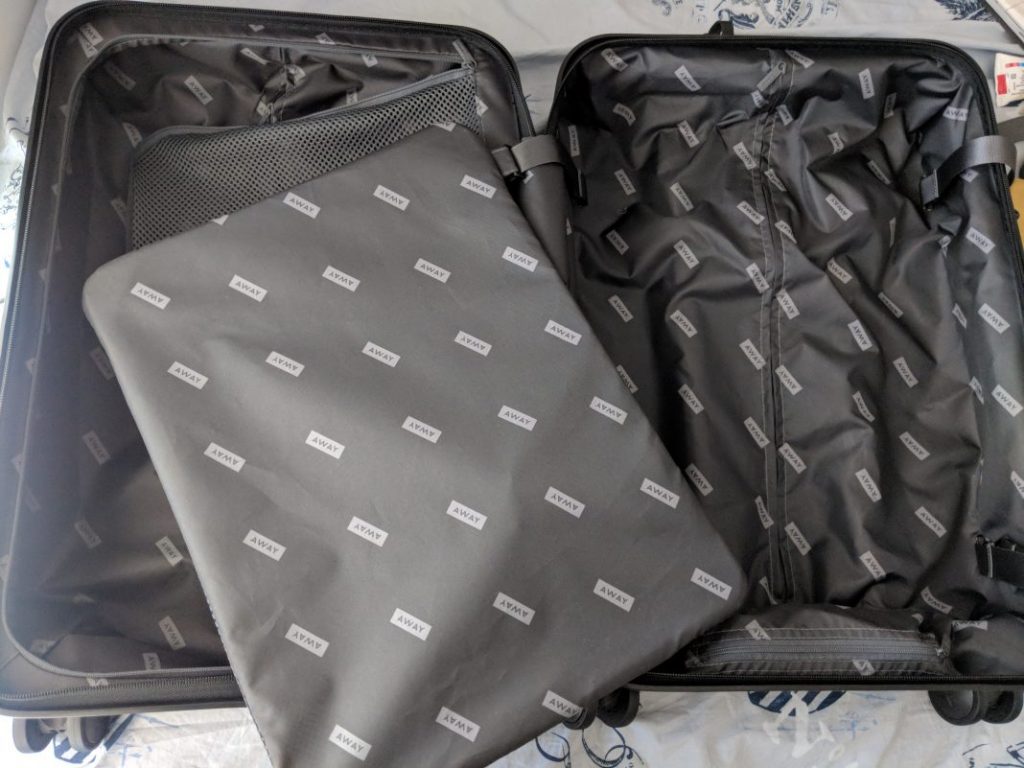 Once inside the AWAY bag’s interior you will have two compartments for storage. The left side can be for shoes, body oils, and other things while the right side is most likely where you put your clothing at. Also the right side is a mesh pocket for if you want to store devices such as a tablet, laptop or in my case a portrait I had drawn in Vegas and didn’t want to fold up. One of the best things AWAY has is a laundry bag. No more grabbing a shopping bag and throwing your dirty clothes in or maybe that was just me. Its water-resistant too so if you have wet clothes have at it. 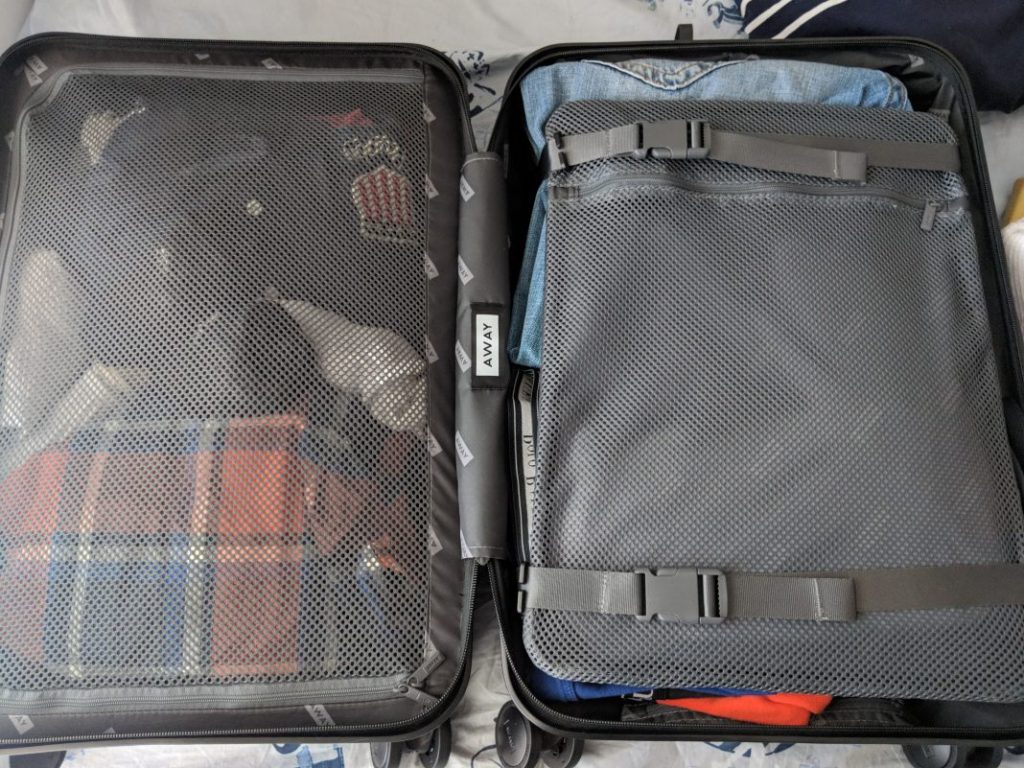 Knowing I be in Vegas from Saturday to Saturday I packed about a week’s worth of clothes. I loaded up three packs of kicks on the left side which were easy as they were all low tops and compressed easy. I liked that I was able to keep them separate from everything else especially with the zippable compartment. On the right side I threw in couple pairs of jeans, underclothes, socks and shirts. It did feel a little tight but using the mesh pocket also doubles as a compression pad as it has straps you can tighten. Once everything was packed I zipped up and rolled out. You can see the AWAY luggage expanded a bit but that’s fine though.

One reason I knew the AWAY bag would come in handy too as I had a few layovers and I knew I be hitting various airports. Wheeling from area to area was no problem and the Hinomoto wheels held up nicely. Also throwing it in the cargo overhead bins seemed to be no problem. Be mindful though of the overhead bins though as while I flew Southwest my entire travel coming back to NYC I had to turn the bag horizontal as I would primarily put them in vertical. The bag does take some scuffs but I was able to wipe them off and the bag looks good as new.

Even though I have taken one trip with it thus far AWAY has made my traveling experience better than previous outings. The durability of the bag and that was able to fit so much in and kept everything intact is a gem. The separate compartments and the included laundry bag provide great organization. Not having to rummage through my bags to look for a battery when I have one within reach thanks to this own compartment on the bag. Best of all AWAY offers a lifetime warranty on their luggage and a two-year warranty on the battery. It doesn’t get any better than that.

AWAY bags start at $225 and go up to $295 for the largest. Keep in mind the batteries are only included in their Carry-On options.

AWAY luggage Carry On Bag
1 of 7