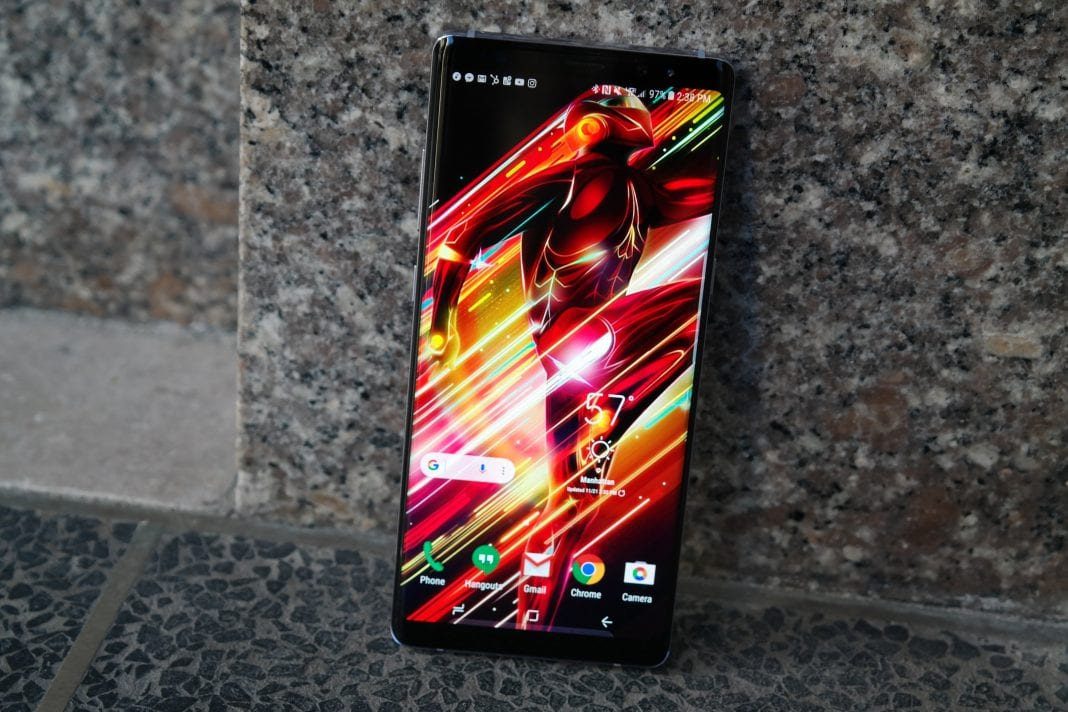 Time flies since the last time I reviewed a Galaxy Note device, two years to be exact. Unfortunately never got hands on the praised but eventually faltered Note 7 but in b/w that time played around with five other Samsung phones (S7, S7+, S7 Active, S8, S8+). While I enjoyed those devices my fave line has always been the Note series. This usually because of it’s cutting edge tech,battery,size and even sometimes the S-Pen. Using the Galaxy Note 8 for the past couple months I can let you know whether it’s King of the Mountain or has been toppled over.

Comparable to the Galaxy S8(S8+), the Galaxy Note 8 is a behemoth of a phone. It stretches out to close to 6.5” tall and has a curved glass body that wraps all around the phone sans the aluminum frame that distinusughs back and forth. Type C is on the bottom alongside a speaker and the slowly fading but always welcome 3.5mm jack. Power button on the right side, Volume rocker and the hate or love it Bixby button underneath it. I did utilize Bixby more in this outing with Samsung than prior devices. I believe it has moreso with the software getting better than anything. 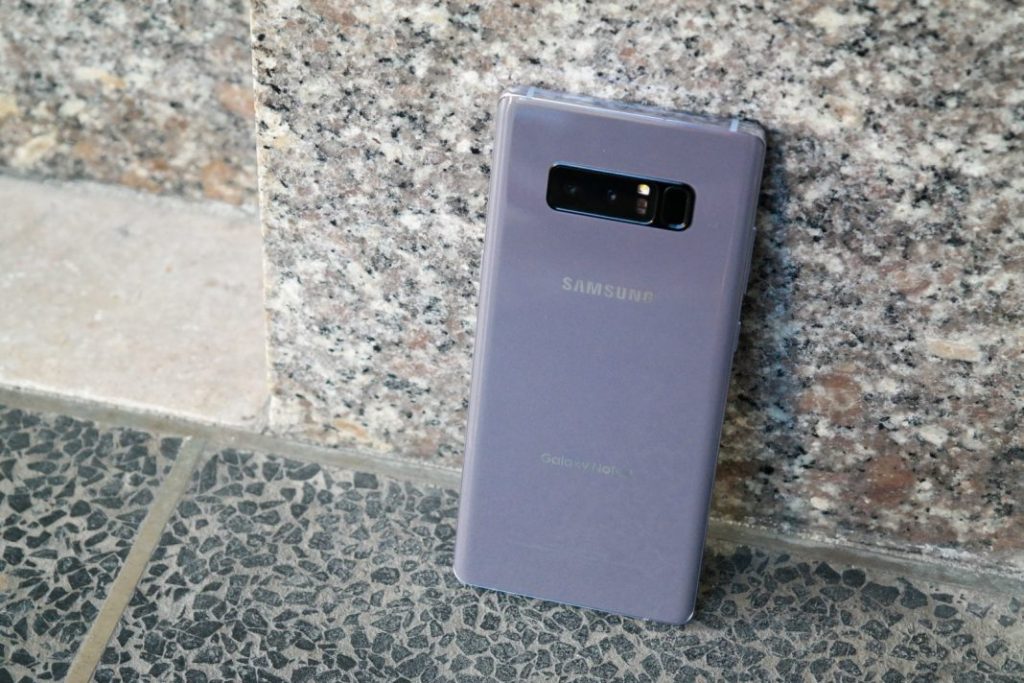 Samsung has made quite a gem of a phone with the Galaxy Note 8. While it can be a little intimidating for some with its large size it’s fairly light and weighs under 7 oz. You may throw on cases that will be heavier than the Note 8 quite frankly. 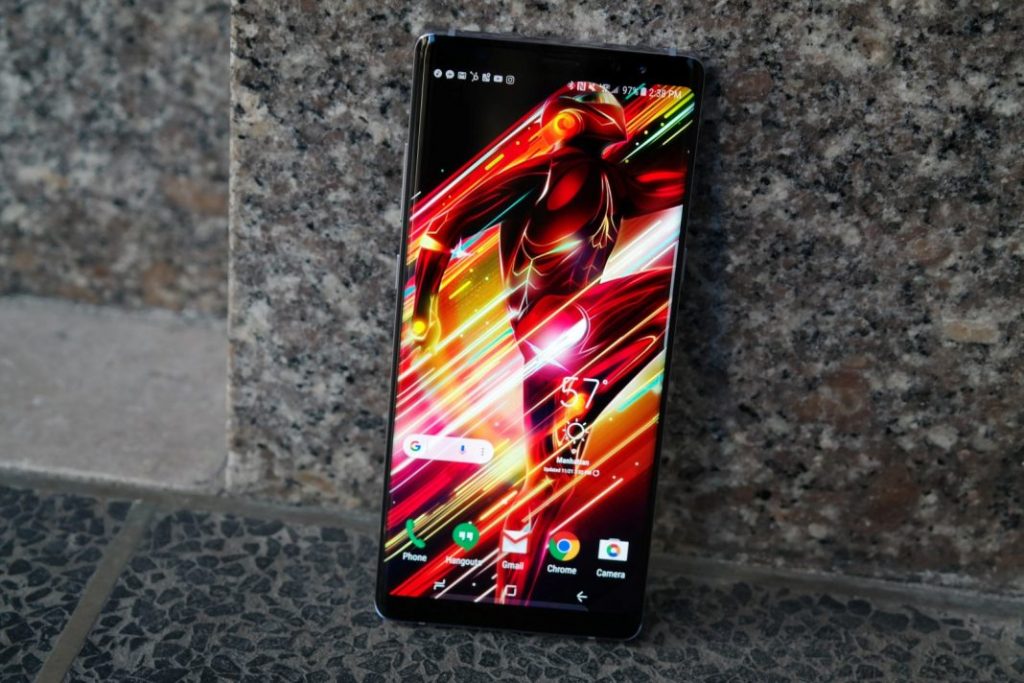 So I have used a ton of smartphones over the past year even those with close to the same screen ratios but I just can’t stop loving the Galaxy Note 8’s Infinity Display. It measures in a whopping 6.3” with the sweet curves going over each side making it never bezel-less. It is composed of a 18:5:9 aspect ratio laced with 521 ppi this along a WHQD display. Because of its sheer size and screen quality it’s a beast at looking at content no matter what the setting. I have spent time watching Netflix shows such as Black Mirror in HD quality or even some My Hero Academia episodes on my normal train routine or even flying across the country. On the back and front it’s been coated with Gorilla Glass 5. Over the past few months using it the screen still looks good no matter whether its been in my bag, pocket or the few drops I have graced it. 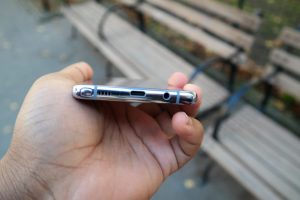 Just like its smaller Galaxy S8 Plus cousin its using a Snapdragon 835 chipset, Adreno 540 GPU and comes with 64GB of storage. The difference from the Galaxy S8+ and Galaxy Note 8 is the Note 8 is rocking 6GB RAM compared to 4GB on the S8+. Even more surprising is the Note 8 has a smaller battery using 3,300mAh compared to 3,500 on the S8+. It’s not a huge number but still. Luckily using the Note 8 I have come across stellar battery life and the usual quick charging is a savior. Doing various tasks whether watching content, writing notes via the S-Pen or taking pictures every five minutes the Galaxy Note 8 has been a beast.

The Galaxy Note 8 has been out for some time now and when it came shipped out the box it was using Android 7.1.1. Months later its still unfortunately on the same OS. I was hoping by the turn of the year into 2018 we would be getting Oreo but alas it hasn’t hit the device yet. There have been some beta builds but frankly I like to see the new software implemented. I will say the Note 8 runs its TouchWiz software better than when I using the S8+. I would run into some app crashes here and there but the Note 8 has handled them with ease.

Security options such as Fingerprint Scanning have worked as usual without problem. Same goes for Face Unlock that works with or without my glasses. Iris scanning I don’t use as much as it’s not as flawless for me as the other two.

This area is where I fell in love with the Galaxy Note 8 and that’s its Dual 12MP lens on the back. You are getting dual OIS, capturing, and focusing. With dual lens you are able to take photos that have a bokeh effect and you can even adjust how much background you want blurred out or none at all. Also its taking two photos so you can have your regular shot or wide-angle view if needed. I had stated with the S8+ that Samsung was playing catch up but they stepped their game up with this camera. If you want to get deeper there is of course Pro Mode for manual shooting, Food Mode to give more color and other features. Here are some nice shots I took with the Galaxy Note 8.

Like the Note 5 before it and its smaller cousins the Galaxy Note 8 is available across all carriers in the states and even internationally. My colleague Mike has been using it on AT&T getting great coverage and sweet data speeds. As for myself I have steadily been using it on Verizon’s LTE network all over NYC and in Las Vegas during my annual CES trip. Verizon’s coverage has been pretty sweet and was a lifesaver in Vegas last month.

I been using the Galaxy Note 8 for quite a few months now. I had it as my daily driver ranging from web browsing, making calls, and watching a ton of content. Moreso I love using Samsung Pay and would make it my go to for payments everywhere I went. A couple of months down the line though sadly the Note 8 did go kaput on me. Not sure what happen but it did. Samsung is a gem though as I went to their Samsung 837 store in NYC and they looked over the phone. This is a free service might I tell you. They ended up replacing the motherboard but since then its been good as new. I mean things happen and I loved Samsung for being able to fix their own phones on site and you not having to go through the carriers or retail stores.

Also while some may not utilize it I enjoy the S-Pen, pulling it out to jot down notes without having to open an app and I find it great to use on playing some mobile games.

Over the past few months the Galaxy Note 8 has become one of my favorite devices to use. With its massive size it brings one of the best displays on the market in a smartphone and its hardware insides prove a great user experience making multitasking a breeze while having sufficient battery which can easily be replenished with its quick charging. While I’m fan of the size it may deter some that don’t like large phones. Also its price point over $960 makes it one of the most phones on the market just under the iPhone X. If you want the best phone Samsung has out the Galaxy Note 8 is that, if you want something a bit smaller the Galaxy S8/S8+ will do you good as well.