Been a couple of years since I covered the first Huawei Watch which at the time I considered one of the better Android watches out with its build quality and various styles. Prices were just a little up there in terms of cost. Has Huawei made any improvements with its successor? 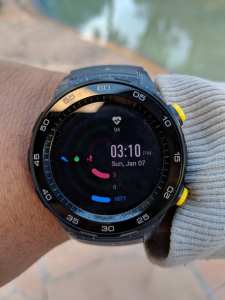 For starters there is two versions of the Huawei Watch 2 which come in styles of Classic and Sport. Huawei was nice enough to provide me with the Sport version. There is really isn’t much difference between the two other than the watch bands and the body on the Sport is plastic and the Classic is a metallic like finish. Compared to the first Watch the bezel is huge on the Watch 2 and this new line I feel is catered to the fitness/workout crowd.

The elegance of its predecessor is gone and for fans of the old it may deter them from changing wrist watches. But once again it’s pretty durable as far as its rated IP68 for water/dust. Meaning you can get a nice sweaty workout or get caught out in the rain without much issue.

As far as the hardware is concerned you are getting two buttons on the right side(one is main key and other is programmable) and underneath are where the heart rate sensor hides. Also like the Watch before it they are utilizing a magnetic prong charger. Like I mentioned on the last Watch never been a fan and wish they went via QI charging. I will say though this charger is better than the last as its sized perfectly and latches on pretty strong to the Watch 2. Just don’t lose or misplace this charger or you are out of luck. 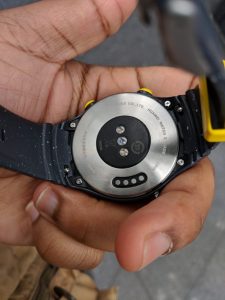 The Watch 2 breezes through activities thanks to it rocking a Qualcomm Snapdragon 2100 chipset along a 1.2” AMOLED display with 326 ppi. This is one of the areas where I feel Huawei faltered a bit. The first Watch was rocking 1.4” and a thin bezel but this one just feel small and the bezel doesn’t make it easier. It looks nice display wise but I could go for more screen real estate. Also with this bezel I’m surprised Huawei didn’t make it rotating which would have made tasks easier.

Battery life isn’t bad as its using 420mAh. That is as long as you don’t have it tied to WiFi all day. Otherwise you will be done by the end of the day. It also has 768MB RAM and 4GB storage if you want to throw some music on there.

I was a huge fan of the Huawei Watch based on its clean look and display but the smaller screen and large bezel makes the Watch 2 seem like a totally different device. It’s great as far as battery is concerned and if you like to work out its accuracy and responsive is up there in terms of keeping track of stats. If you are interested in the Huawei Watch 2 and like the look of sports watches it’s available for $249.99 at various retailers.