Call of Duty is a series that I used to love when I first starting playing it years ago. This is for a guy like who isn’t necessarily a fan of FPS games, but when I did, I always liked the idea of playing through the experience of early World War. Things change however, and it would make sense that after a while Activision would have to make COD more playable for younger gamers and not the nostalgia buffs such as myself. So, with that, they moved into more modern warfare. It started off pretty good but I have mixed reactions about the modern warfare games. Yes, the guns and gear were much better but it didn’t always make for a better game. I didn’t play them all but I played quite a few. My personal favorite COD game with modern warfare was COD: Black Ops 2 but outside of that game, for me, the series didn’t always get better with each iteration. There was Ghosts which wasn’t bad but it wasn’t that good of a game, I played Zombies more than anything else with that game. Advanced Warfare was trying to be different but ending up being just weird. Black Ops 3? Meh. Lastly, Infinite Warfare which oddly I did kind of like although I know I’m in a small minority but say what you will, the campaign in Infinite Warfare was dope. Basically, the COD franchise has needed a bit of a refresh even if it meant going back in time.

Normally, I would say doing something like going back to WW2 to rehash a constantly used time period would make me hesitant to play but with Battlefield 1 having been such a good game I figured, why not give COD WW2 a chance? I’ve been playing it now for just over a week and I’m really enjoying the game and I’m glad COD went back to its “roots” so to speak. World at War was my favorite COD and still is, so playing COD WW2 to give us this experience in the current console space is a good thing. There’s a lot to like about this game and there’s every reason to pick it up but there are also reasons not to.

COD WW2’s look is impressive. Whether you’re playing on the PS4 or the Xbox One X you’re getting a game that gives you the look and feel of that time period. Activision paid great attention to detail with this game as they do with all the COD games so really you’d be judging this game more so by how it looks on your TV than whether it looks good at all. The game is gorgeous. The environments, gunplay, story and cutscenes put you right into the fight and you can feel that sense of urgency when you’re attempting to complete a mission.

The campaign mode is the crown jewel of the game as a whole. It’s got all the makings of a WW2 drama. Call of Duty’s campaign mode has never really failed me but in this instance, it’s particularly good for me. I loved that sense of urgency and that feeling of combat and not knowing whether I’ll survive each mission. When I played prior COD’s I kind of always knew that I would get through the mission because I had the guns and hardware to do it. I felt like I had advantages. COD WW2 kind of takes that away and focuses more on team communication, mission protocols, espionage, the use of different vehicles and battlefield smarts more than the weaponry. Protecting your brothers in arms as Private Ronald Daniels and getting them from Normandy to the Rhine river is paramount and the campaign will remind you of that as it can get really crazy really fast with bullets flying from everywhere. 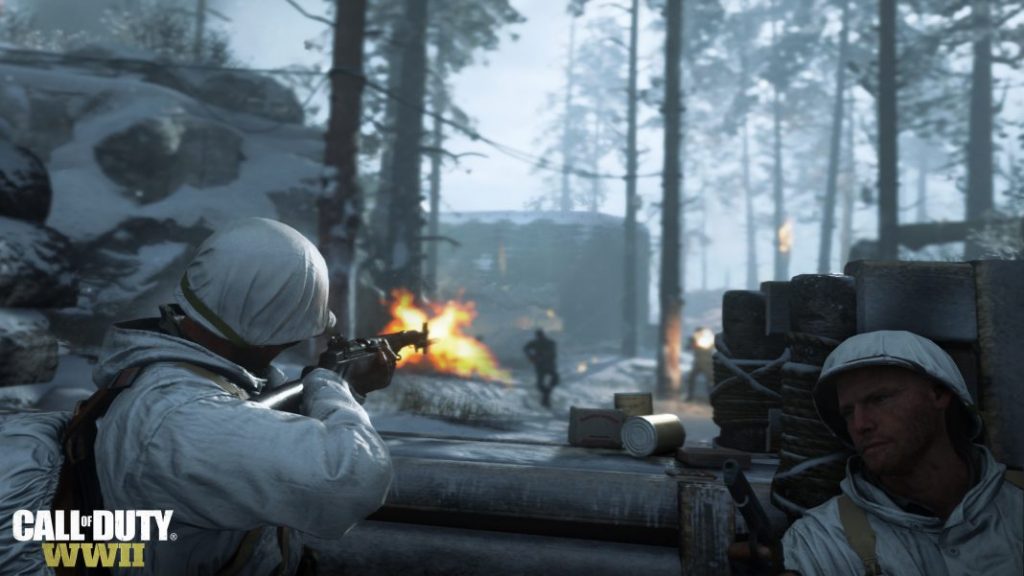 The gameplay in the campaign is great and it looks great and if you have a 4K TV and a PS4 Pro or an Xbox One X then your experience is that much better. I personally have a PS4 Pro and it’s gorgeous. It might be slightly better on the Xbox One X especially if it’s running at 60 FPS. If there is no other reason to play COD WW2, then do it for the campaign. It should take about 6.5 to 7 hours to complete and when you finish you’ll feel accomplished

Multiplayer is why a lot of people and most of my friends play COD at all. I believe that when COD is done well, it’s probably the best aspect of the game. With COD WW2, the multiplayer is good but it’s been better. There are a few game modes within multiplayer that most COD players are already used to. You have Search & Destroy, Team Deathmatch, Domination, Hardpoint, and War. War allows you play on either the Axis side or Allied side in 6v6 match.

COD WW2 also has a social space similar to the Tower of Destiny. After you create your personal character online players meet up here and just like in Destiny, connect with other players and join up in matches and try to gain some XP and loot killing each other. The Divisions element of multiplayer let you separate your team into jobs. You can be in the infantry, armored, airborne crew, mountain and expedition. This can help you in taking advantage of what you’re best at in multiplayer instead of always trying to shoot it out on the ground and getting wiped out in seconds like I normally do. Multiplayer is never fun for me but I had some fun with multiplayer this go round. All that multiplayer really needs is some new maps and some updates to the spawn in process and it’ll be that much better. Not too much to report when it comes to multiplayer. It is what it’s always been. Nothing to see here.

Nazi Zombies is the game in COD WW2 that will probably offer you the most fun right away. Just like in every other version of it you get to go around and basically kill zombies to your heart’s content. It’s got a campaign like style in that there’s an objective here but whereas the WW2 campaign focuses on the elements of military war, this is more focused on the zombie apocalypse and it is intense. Playing the prologue is a must to get a feel for what the game will be like if you’ve never done it before, after that, get ready to rumble.

Nazi Zombies is a teamwork game. You can play online with random players or you can play locally with your crew and try to meet as many objectives as you can and kill the deadheads. The Zombies in this game just like the previous Zombie games come out in waves and with each wave, they become more abundant, they get stronger and faster and you will also start to see boss zombies, ammo conservation is critical. You don’t want to go into it just shooting everywhere because guns and ammo are scarce and the weapons and additional bonuses and powerups are only gained through a XP called jolts. Zombies has sort of a Bioshock feel with the powerups you can get and it’s so much fun to play. It does get hard but never frustrating. Aside from the native campaign, this is the best part of COD WW2.

Is COD WW2 is must have?

Hard to say whether COD WW2 is a must have. That, of course is up to you. For me, I’m not upset that I picked this game up. It brings me back to what I feel is the best period of COD. The game is well done especially when you consider how it looks and how it plays. Multiplayer is good but could be better but it’s not a deal breaker because over time you can expect Activision to update COD with new maps and weapons and the game will get that much better. Nazi Zombies is super fun and that’s a good reason for this game as a pickup. Buying a COD is always one of those things that you’ll either love or you won’t. If you don’t cop this game, then you’re not losing out terribly and if you do buy this game you’ll be buying a solid game with good replay value.