Been awhile since I covered a NETGEAR router with the last being the Nighthawk X6. That was a few years back which was and still is a beast in its own right. Problem is maybe like most apartments or even homes you have your cable modem on the far end of the household while still trying to stretch that range and bandwith out. It doesn’t work in all cases. I saw that NETGEAR has a possible solution of this with their Orbi Home System which I saw back at CES and even work a bit over the summer at their NYC event. Does the Orbi fix that WIFI range issue? 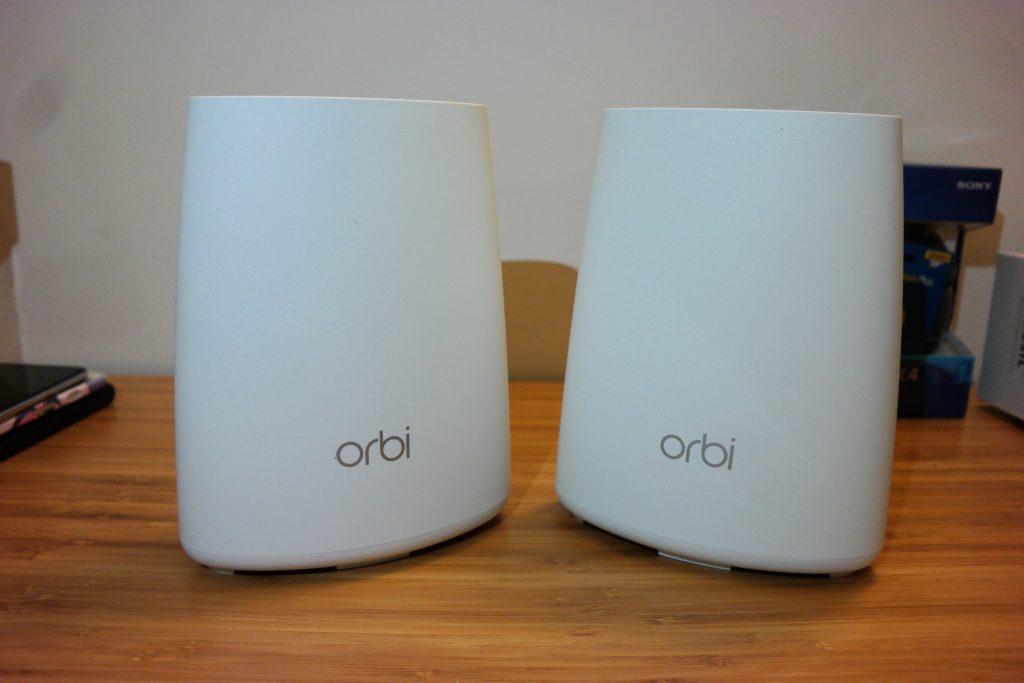 First look at the Orbi and you see it’s a distinct look than your typical router. There are no folding antennas and flashing everywhere. The Orbi has a clean minimal look on its cylinder frame. Antennas are there but they are designed within the cylinder at the top. This goes for both units it comes with as one being the “Router” and the other being the “Satellite”. I like how NETGEAR had little labels on them indicating which is which. Also included is two power adapters, and one Ethernet cable for the Router to connect to the cable modem. They are pretty huge though and may go good on a bookshelf or something. Each one also has Ethernet ports if you want to connect more devices.

I been setting up NETGEAR routers for maybe 15yrs and it seems to get easier as time progresses. When I setup the X6 I had to grab my PC. With the Orbi none of that is necessary and you just need to have an iOS or Android device nearby and download the app.
Going back to those labels on the devices they have QR codes that you can scan with your smartphone (or tablet) and it will automatically recognize and search for the Router. Couple more steps and it will look for the Satellite. Voila and you’re done. This may have been of the least painful experiences in setting up a router in some time. Kudos for NETGEAR making the setup easy that basically anyone can do it long as they have a mobile device in hand.

network and password which actually took me longer to do then the router setup with my indecisiveness. Afterwards I went back into the mobile app to see how deep you can get with configurations but it’s pretty barebones. All you can do is change the WIFI Name and Password, what type of security(WPA) and share the info via app options.
I guess I was looking for options such as guest passwords, parental controls, and so forth. They aren’t really necessities but are usually welcome. Of course, if you decide to use their desktop app NETGEAR Genie or login via the web you will gain access to these missing options on the mobile app. I’m hoping they implement this feature in the future.

Since using the NETGEAR Orbi I have noticed a better range of speed in my household compared to before. My modem has always been in the bedroom and by the time you get to my kitchen you are losing some ground as far as data is concerned.

Since having the “ROUTER” in my room and the “SATELITE” in my living room I have seen an increase in bandwidth. This is a godsend when I want to use my devices in the kitchen while cooking. In my bedroom now getting 300+ on my devices and around 200+ in the kitchen.

Anything with an easy setup is a winner in my book. NETGEAR has managed to make the setup of the Orbi quick and painless for even the novice user. It goes at a decent price but looks to be well wore the cost. Prices vary depending how far of a distance you need as they are available in ranges of 3,500 sq. ft., 4,000 sq. ft., or 5,000. I’m using the AC2200 model which covers 4,000 feet and is perfect for my apartment space. That ranges for $300 if you shop around which isn’t too bad.