Well back in January I introduced the Building a Smart Home Series Phase Two. Phase two takes place in my new home, a nice little 4 bedroom/2 bath home in the suburbs. With my old apartment I had to cover two bedrooms and the other rooms to cover. With the new home, I have much more to cover, but I decided I wasn’t going to do it all in one shot (well because budget reasons haha). So while I had some devices and products I took with me, I had to look at how I would set this up completely different from my apartment. And while phase two is focused from a homeowners perspective, this can easily be applied to apartments as well and I’ll be sure to add in the apartment alternative as we go along.

While you can expect I was more than amped to just turn my whole house into the living embodiment of the Jetsons, my starting budget wouldn’t let me be great out the gate. I have to ya know be a responsible adult and do some budgeting and planning. So I stepped out my house and looked at what was the most important thing to set up first. Taking a step back I thought the first thing I wanted to carry out was security. I wanted to know when things opened and closed when I was there and when I wasn’t. I also wanted know if know if someone approached my home. So this is where I began. 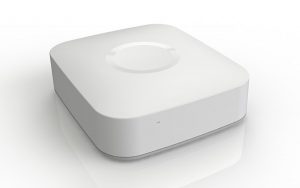 If you remember from last month’s post, I brought a few things with me that I already owned at the apartment. First thing up was setting up my SmartThings Hub. As this would be the brains, the command center to my home, this had to be the first thing. Once I got the SmartThings Hub set up (Of course I should note first of course was setting up my WiFi in which I used the EERO WiFi system for that!) I began adding the sensors I needed. I wanted to know when my front and back doors opened, so I start with two SmartThings Multipurpose Sensors. These can be used in many ways. The sensor is two pieces, when they are in near to each other it is marked as closed. When they separate of are moved away from each other it signals something is open. These are multipurpose sensors so they can be place on a door to let you know when it is open/close or on a window. I installed these on the doors so I would know when they opened. 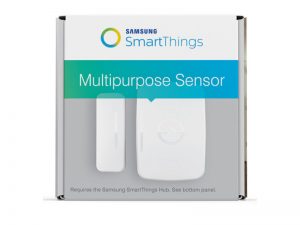 Once this was in place, using SmartThings you can programs those sensors to start a few actions based on if the door is open or not. For security I can have it alert me when I’m away and the door opens. Also I decided to create a rule for night-time. No one likes opening your door at night and seeing darkness (and boy does it get dark in the suburbs..no streetlights on every corner). The rule I set says to turn on the porch light and the front of the house floodlights when the door opens from Sunset to Sunrise, so this covers when its dark.

Focus on the Front Door 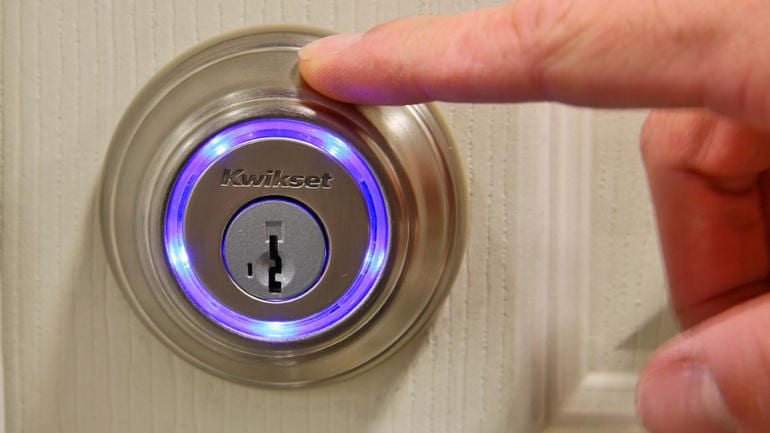 Now that I’m able to know when my doors open, I focused on the front door next. Whenever you read an article but things you should do when you first move into a new home, one of the first things you see is to change the locks. Since there is no way know how many copies of the old keys are out there, this is a good suggestion. Of course I didn’t change the lock with any regular key, this is where I installed the Kwikset Kevo Smart Lock. So not only did I take care of the changing the lock park, I made it where we no longer had to pull out a key to get in. We can simply tap the lock and have it open for us. This was another device I had from the apartment. At the apartment I didn’t have a deadbolt, so I ended up using the Kevo as lock and sudo handle. But here I was finally able to use it as intended. And since it has been installed, I love this thing even more. When I’m not at work and need to have a set of keys on me, I don’t even carry my keys, just the key flob for the car and my phone. And that weighted key ring is not missed! 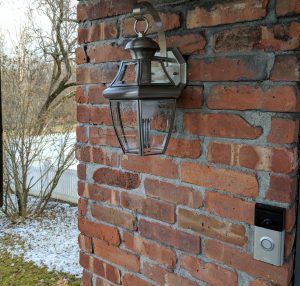 Another item I added to the front door was the Ring Video Doorbell. I know I mentioned this in last month’s post, and in review earlier but I love the Ring Video Doorbell. There was no questions this was going to be installed. Installing this allows me to see and answer my doorbell from literally anywhere, but to set it as a motion detector and let me know when someone walks on the property. I can see who it is, what they’re doing and speak to them if need be. Great for when you receive packages and when someone happens to walk by your front door. Now if I can only capture some footage of the deer that like to walk on the property in the wee hours of the morning!

One quick item and something I will expand on, but I had my existing Dropcam PRO since around, so I installed that to have some inside footage of the house as well. So if someone does get in, I can see them and capture anything that could be helpful later.

Feel Safe by Lighting the Way 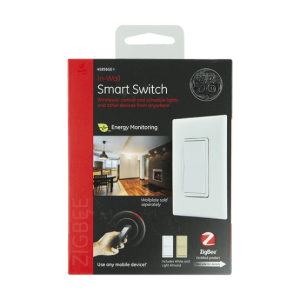 As I mentioned earlier, with the multipurpose sensors, at night when the doors open my porch light and front of the house flood lights comes on. This was done using two different devices. For the front porch, I installed a Cree Connected LED Smart Bulb (you can get this from like Home Depot) in the recently change porch light (got something that went well with the Ring doorbell). And for the flood lights, I connected a GE In-Wall Smart Switch. I knew for a home I wasn’t going to go the smart bulb route as much, so where I can I use these. Perfect for ceiling fan lights and lights that don’t use the common bulb light type. For the flood lights I didn’t want to put smart bulbs on the outside, so I decided to control it at the switch instead. So now I can trigger this both when the doors open at night and when it is night they come when we arrive to the house. This provides great light as we walk to the house, making all feel safe knowing we can see along the way.

There is still some more I need to add along the safety and security lines, but as I add devices I can add them to the security foundation I’ve laid out. Do you have a smart home? Let me know some tips or ideas you’ve implemented for your home!