I recently decided to take the plunge into online poker. As an avid live tournament player, online just didn’t have that edge for me. I thought about going the PokerStars route, but I’ve never been one to follow the crowd and 888poker looked like a great option.

It’s no secret that PokerStars has the largest player base and has huge tournament guarantees. But, with a larger field of players, you have to outlast more players and survive longer to make the money.

888poker has some similar guarantees with tournaments like the Whale and the Sunday Challenge. The fields are smaller, and so you get a better chance of going deep.

888poker has the usual rostra of tournament games, from Sit & Go’s to Deepstack MTTs. However, it’s the latest addition to its stable of SNGs that has caught my eye. BLAST is a combination of short-handed and all-in play.

Firstly, players are seated 4-handed on a super-turbo No Limit Hold’em SNG table with buy-ins ranging from 10¢ to $30. The prize pool is kept a mystery until after the game begins and is based on a draw that varies between two and ten thousand times the buy-in. I’ve seen prize pool numbers as high as $300,000 on a $30 buy-in game! 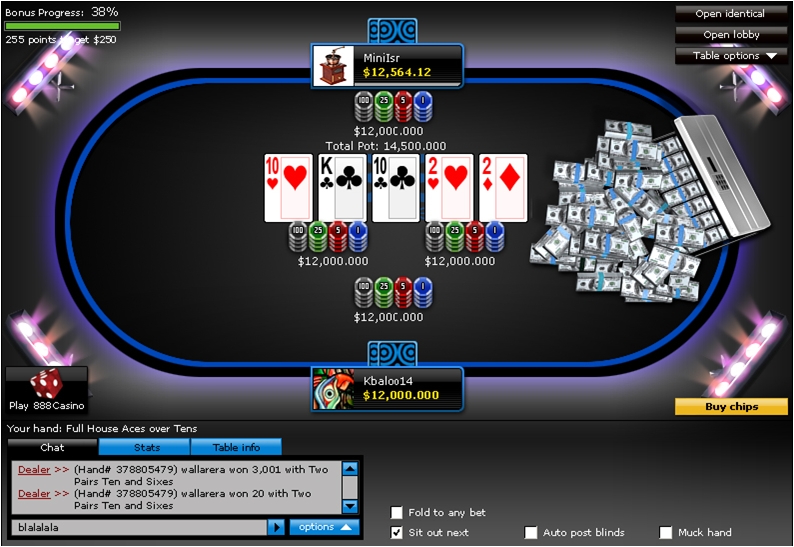 SNAP poker on 888 is another great variation that gets you into and out of a hand at the speed of light. You’re able to fold “out of turn” and get dealt a new one straight away.

888 also has another intriguing tournament format. In “Show Me!” games, all players get to see the winning hand’s hole cards, whether they make it to showdown or not.

Now, you’ll never be left wondering if you’ve been bluffed or not!

888 was one of the first online poker sites to release a poker app. Their version works especially well on Android with a download iOS version.

It’s free to download, and you can pick up a game on your mobile that you left off on your PC or Mac.

The apps can be found in the Android marketplace and the Apple Store. I saw quite a few tables going when I checked it out. You get access to MTTs, SNGs and cash tables – all in No Limit Texas Hold’em format. You can even play SNAP and casino games, if that’s your cup of tea.

Unlike some other sites, 888’s stable of pros are a mixed bag. You have Denilson, an ex-football legend from Brazil alongside the all-time online tournament leader, Chris Moorman.

In between, famous celebs like Kara Scott add a bit of glitz and glamour to the rest of the team including, Sofia Lovgren, Dominik Nitsche, Bruno Kawauti, Bruno Foster, Nicolau Villa-Lobos and the recently added Natalie Hof.

888poker has a new Live Local Series that skips around the globe bringing live poker playing opportunities to its online enthusiasts. From Brazil to Tallinn to London to the Costa Brava, you get access to loads of games with the chance of rubbing shoulders with their ambassadors as well as big name celebs.

In fact, this October, I went to their first-ever 888Live Poker Festival at Aspers Casino in London. Guarantees were smashed, and I also got to rub shoulders with Antonio Esfandiari, Michael Mizrachi and Melanie Weisner!

The 888poker Club is the latest version of their VIP system. Instead of directly earning points from rake, you have to clear challenges to earn points. In turn, these points can be used to receive gold tokens (as you climb up levels) that can be redeemed for prizes.

At 888, you also get a 100% deposit bonus up to $400. First-timers can play in free tournaments with prize pools totalling thousands of dollars.

Plus there’s always some promotion going on offering all sorts of generous prizes, like the WSOP November 9ners trivia contest that sent 4 players and 8 of their mates to Vegas to watch the 2016 WSOP Final Table. How cool is that!

If you’re a poker player looking for a fun place to play, then 888poker is it. They offer a wide range of products suited to lots of different types of players.

They’re also a rather cool company, if their team of representative ambassadors are anything to go by.