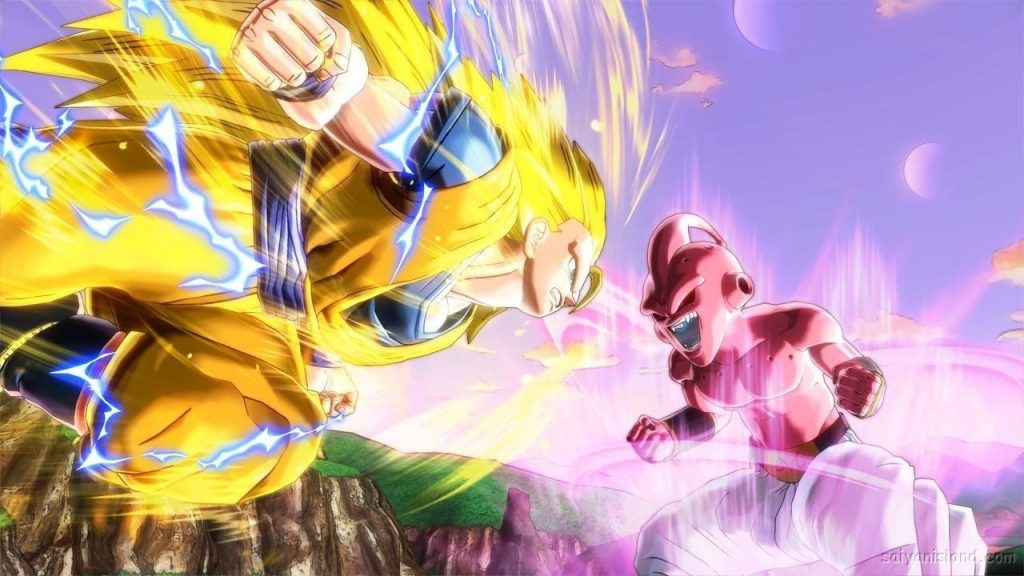 Larger maps scales than the first entry of Dragon Ball Xenoverse. So more room for those epic fights.

Dragon Ball Xenoverse 2 is getting the true MMO treatment by having 300 live human players at base locations. This is huge for the social capabilities.

As a galactic anime franchise turned game the flying mechanics was in need of improvement. The community has prevailed and new and improved traversal mechanics are added for easier traveling to locations, as well as enemies in battle.

8. Vehicles – Hover Vehicle – Can Race Against Other Players

Vehicles have now arrived in Dragon Ball Xenoverse 2. Vehicles are now obtainable in social areas to travel and race against other players in the world.

Along with improvements to the scale of the world comes also an improvement to the interactions with the environment. In Dragon Ball Xenoverse 2 there are now destructive environments to crash enemies through, and crash through some more, etc..If anything crashes into the water the reaction of it will be seen.

6. Fight in the Water

Speaking of water, players now have the ability to fight within water. Yes ! This is taking water fights to another level, so epic underground fights are now achievable.

In the heat of battle when combos are being dished out you have a chance for stamina break. Breaking an opponent’s stamina can what looks to be to leave your opponent open to extend combos. The question is how well will it work and when can it be activated.

With Honing Dash, players will have the ability to evade getting hit and also speed towards an opponent.

Who doesn’t love free content when it comes to this generation of gaming. Bandai Namco has announced that there will be Free Content to rack up on and DLC packs. Awesome over 9000 indeed.

Dragon Ball Xenoverse was a huge success and loved by the Dragon Ball community since it is always a hit or miss with a Dragon Ball video game. The developers have listened to the community and have strive to make improvements to the battle system. So let’s hope the nuances bring some epic times. G Style Gaming has the pleasure to meet with Bandai Namco next week so fingers cross for a hands on demo.

Dragon Ball Xenoverse 2 is set to release Fall 2016 on PlayStation 4, Xbox One, and PC. Let us know what new things you like so far ?