I’ve started to really like rugged cases and that’s probably due to the fact that as I get older, I’m starting to get a lot more clumsier. I’m starting to get up there in age and I’m just not as graceful as I used to be. That means I’m constantly bumping into things and dropping things I’m holding, including my devices. I’m the type who has their smartphone on them at all times and the last thing I want to do is drop my device and dent the body or shatter the screen into millions of tiny pieces. That’s why over the past week, I’ve been rocking the Urban Armor Gear (UAG) case for the iPhone SE. While the case is being marketed for the iPhone SE, it will also fit the iPhone 5/5S which is what I’m actually testing the case on (since the iPhone SE doesn’t come out until 03.31.16). 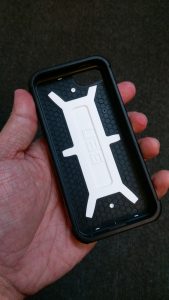 The Urban Armor Gear case is a composite case made of two different kinds of materials fused together to form a single case. That means that with this case, there is a hard armor shell fused with an impact resistant soft core. Installing the case is as simple as pushing your iPhone into it and once it’s on, it’s as snug as a bug.

The impact resistant layer can be seen surrounding the borders of the phone which will help with edge drops. As an added layer of protection, the actual corners are also thicker to provide more protection for those fragile areas. There are even little rubber feet extensions built in to lift the device up a bit in case of accidental spills.

The hard shell wraps around the back of the case and the sides and helps protect your device from hard bumps and everyday use. The shell also has a grooved pattern which helps you grip your iPhone better when in use. The hard shell is where you can also choose the color you want which adds a bit of flare to the whole thing. 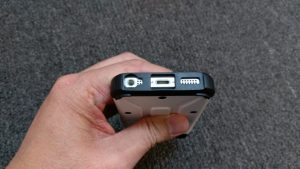 The UAG case has built in buttons to make accessing the power and volume buttons easier while the large port holes means nothing is blocked. One problem I see with some cases are that not all charging plugs will fit. The UAG case doesn’t have this problem. Lastly, this is a major thing for me, the UAG case DOES NOT USE any soft touch coatings or silicone materials. This is huge because I hate that stuff. Soft touch can turn sticky after a while and silicone is a lint magnet. Both those things aren’t present here and because of this, already shoots the UAG case to the top.

Overall, I’m really digging the Urban Armor Gear case for the iPhone SE. It has all the protection you’re looking for in a rugged case in a very stylish and attractive package. If you’re still rocking the old iPhone 5/5S or are getting the iPhone SE and want a rugged case, seriously consider the Urban Armor Gear case. This is a good looking case that should provide all the protection you need, for those with an active lifestyle or those who are just plain clumsy, like me.