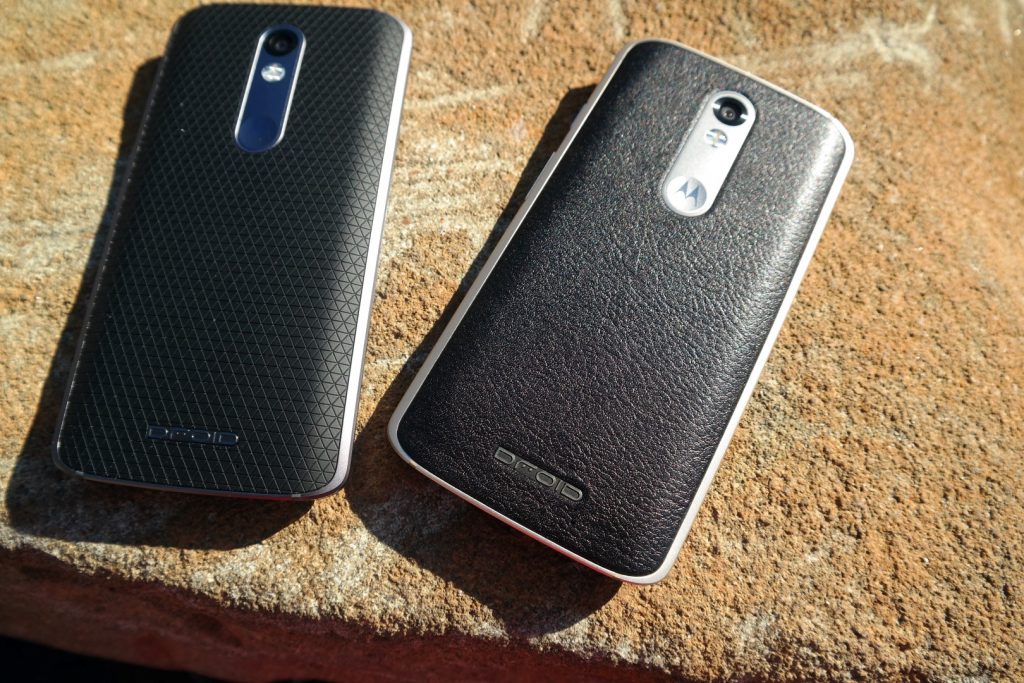 Last year Motorola introduced us to the Droid Turbo which like this device is a carrier exclusive only to Verizon. It can be dubbed as probably one of the best carrier Motorola devices you’d see around and its style was a hit or miss depending on which model you had and who held it. This year Motorola is going back to Verizon with the Droid Turbo 2. How they planned to top last year’s model was giving it access to their customizable MotoMaker online store which gave it endless combo designs and also making the display “shatterproof”. With these additions does it make the Droid Turbo 2 the ultimate successor? 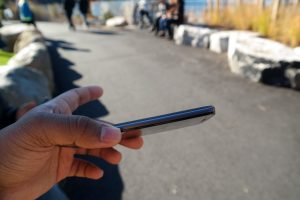 As stated this year the style of the Droid Turbo 2 is truly in your hands this time around. I had a couple of versions where one had a rose gold metal trim around the borders while the back had a leather feel to it. Reach out to the next one and this one had a grayish metallic look to it with a rubberized hex pattern on the back. To think these are just two of various combos of your liking. Hardware design doesn’t change with you having an audio jack and access to your nanosim on top where you can also swap in a microSD card. Dual ports are the rage these days and they are good for saving space. To the right side is your volume toggle and power button while on the left is surprisingly nothing.

Last but not least you have a microUSB charge port and right above that with that crazy Verizon centered in the middle is dual speakers or should I say one speaker as the other grill is for talking into. No matter which design I used of the Droid Turbo 2 I did like its size and how it felt in the hand. It has this kind of wide look to it but it’s not wide like say the Nexus 6. 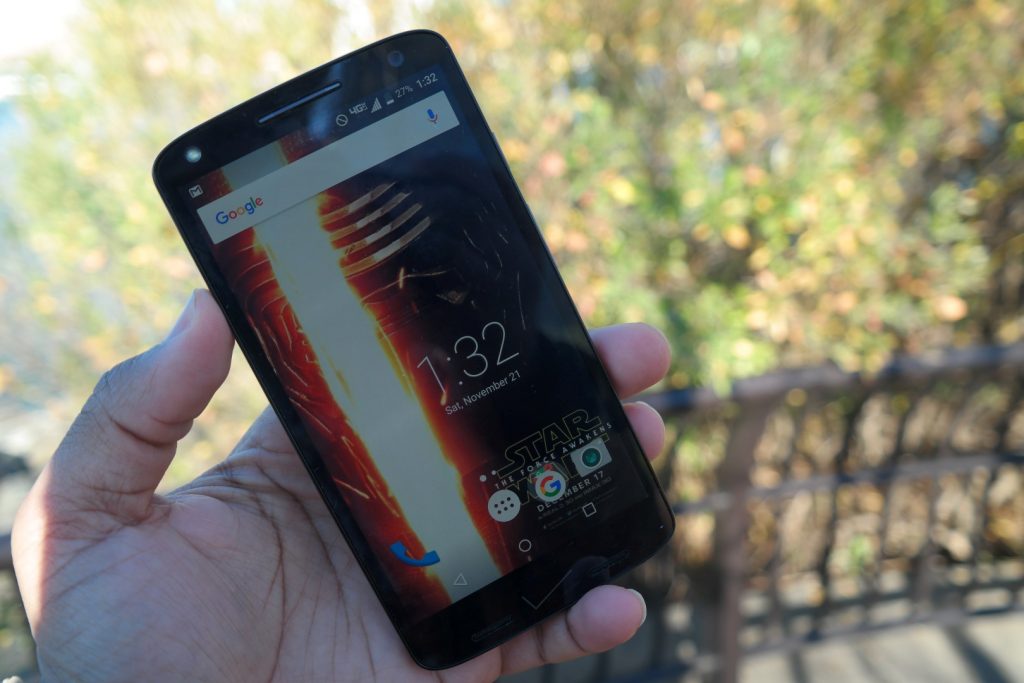 So the big deal with the Droid Turbo 2 this year is its “ShatterShield” display. If you aren’t familiar its five layers of tech ranging from an interior and exterior lens, aluminum chassis, dual layer and of course the AMOLED display. In essence this phone can break much take a beating and as many have demonstrated not be able to crack the screen. Sure you can scratch out the hell out of it but cracking and destroying it is a hard feat to accomplish. More so the display has a four-year warranty on it. So if you break it or damage it upon visual recognition Motorola will replace it. You don’t see a lot of companies offering warranties and its nice to see from Motorola. Besides that the screen is a Quad HD 5.4″ AMOLED offering with 540ppi. It’s pretty good for watching some high quality vids on it can get pretty bright when maxed out. One thing because of the ShatterShield display it is prone to be a fingerprint magnet. Also on the front where the display is a motion sensor for notification purposes. 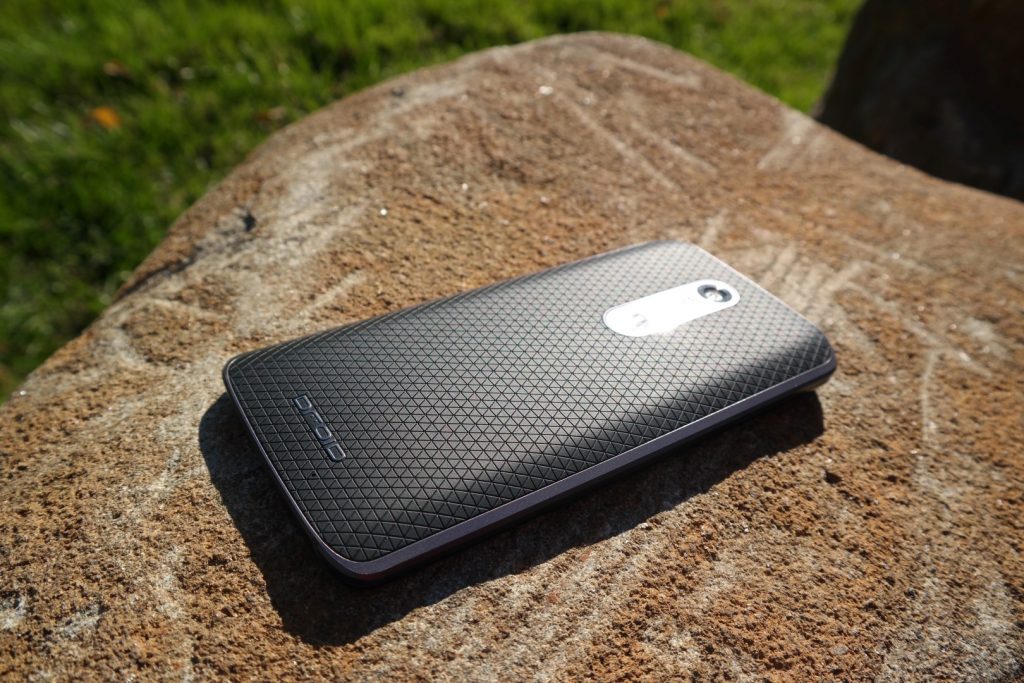 This is where you get to see some of the power with the Verizon’s Droid Turbo 2. It is using a Qualcomm Snapdragon 810 chip with a octa core processor, sporting 3GB RAM, and has a Adreno 430 GPU. In other words, this thing kicks some serious tail. I don’t recall catching any lag on this device and ran most apps I used without any issue. Another great thing about “The Droid That Moto Built” is its massive 3760 mAh battery hidden inside. With how light it is you wouldn’t know it was there. So with a huge battery like that you expect it to take forever to charge right? Thankfully Motorola has instituted TurboPower or Quick Charge to help with your charging capabilities. With its included charger I have seen it go from dead to almost full within the hour. If you need to make a quick run leaving it on there for 15mins will give you juice as well. I have put some miles on the battery and been pretty impressed how its held up. 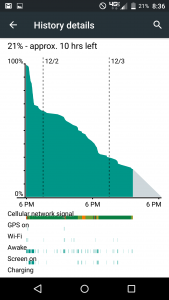 With this being a Motorola smartphone you may not know but their OS is as close to Vanilla Android as you will get from any phone maker around. That being said the Droid Turbo 2 is running Android 5.1 aka Lollipop with hopefully Android 6.0 aka Marshmallow on the horizon. There are really only a handful of devices running 6 out the box and that’s the Nexus 6P/5X and HTC One A9.

Android 5.1 does run smooth as hell though on the Droid Turbo 2 with really no hiccups. You of course have Moto’s custom features such as their Active Display, Moto Action gestures and hands free voice controlling. Shaking it twice to turn on the flashlight or twisting the wrist to access the camera are always welcome features and they work good like on the Moto X. Of course this being a Verizon phone though it is littered with apps you might not use such as NFL or Amazon and you can’t delete them only disable them.

What I consider a hit or miss with Motorola smartphones are their cameras. They have been getting better with age but just haven’t been a big fan of the software. With the Droid Turbo 2 you get a 21MP rear camera while on the front you get 5MP with flash. I have been able to take some decent to nice looking shots with the camera but it’s sometimes trial and error. I like to tap to focus then shoot my images but with the Droid Turbo 2(and other Moto phones) its tap and take the shot. it’s rather quick but I don’t always get the results I want. Low light shots aren’t that great and there sadly isn’t any OIS.

Video recording especially in 4K though is pretty good. Here I did a quick capture in 1080p on a nice Saturday morning with a nice view of New York City.

I been have been using the DROID Turbo 2 for the past month and as its specs read on paper its a worthwhile device. It runs smooth, really no hiccups and has expandable memory. Its Shatterproof display is great for those that damage their screens a good deal and that 4 year warranty is hard to match. Battery life is impressive and Turbo Charging makes it even more a gem. Camera software could be better but its adequate for those that just want to do some quick picture snapping. There isn’t really much to dislike about this phone and only thing holding it back is being an exclusive device to Verizon and the only in the US. I mean there is the Moto X Force for the rest of the world..